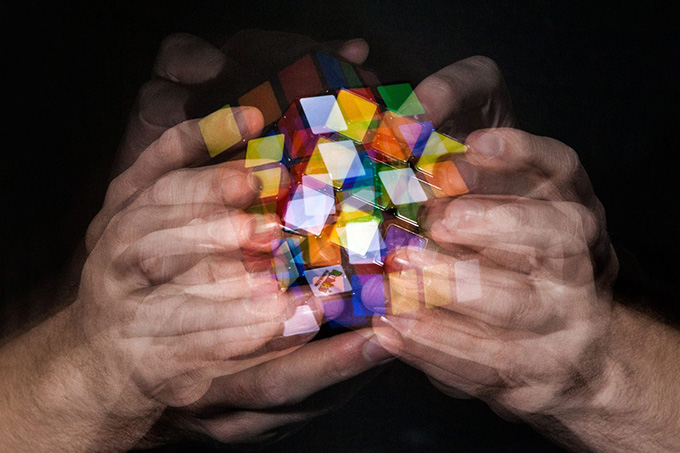 Nobody could think 35 years ago that a puzzle would become the best-selling toy in the world , but the fact is that on January 30, 1978, the Hungarian sculptor and architect Hernö Rubik applied for a patent on what he then called “magic cube” .

Completing this three-dimensional puzzle, better known as a Rubik’s cube, requires a series of skills such as concentration, memory, eye-hand coordination, mathematics, good psychomotor skills and mental agility, among others.

The world record for running speed is held by a young man with autism. You might think that this guy has all those abilities. However, this is not the case. Precisely the documentary The Speedcuber , which can be seen on Netflix, describes him as a teenager with hand-eye coordination difficulties and very poor motor skills.

So how does Max go about achieving and maintaining that record? Is it possible that he is able to carry out a series of previously memorized movements? Yes, it is very possible: people with autism have a large memory capacity that they access immediately when they need it .

The skills known as savant

There are many people with autism, some with abilities called savant (these are those prodigious and extraordinary capacities, superior to what is considered normal, that these individuals with developmental disorders such as, for example, autism show), and few stand out like Max. Some examples can be Manuel, Aitor, Luis, all three with autism.

Manuel is very clumsy motoristically; For example, for him, prodding food with a fork or putting a spoon in his mouth without spilling the contents is a complicated activity that requires a great effort of concentration so that the end is not very positive.

The same happens with his writing, which is unreadable despite his eight years doing daily calligraphy exercises. And let’s not forget that he can’t jump or run. However, he is capable of playing any musical instrument with his hands; his fingers run at impressive speed on a computer keyboard (without looking at the keys and without making mistakes) and he reproduces any Michael Jackson choreography without difficulty.

When asked, he answers that it is a question of visual memory capacity and, where appropriate, also auditory memory, of motivation and of practicing ad nauseam of what motivates him.

Luis is a dependent person with a severe intellectual disability: he does not speak, he hardly communicates, he is not autonomous in his daily life, he needs constant supervision and help with food and hygiene tasks.

We think you can’t read, but you can identify Disney movie or video titles to choose the movie you want to watch (as well as surf the internet until you find what you want). If he can’t read, why is he able to? Luis has a great ability to memorize visual patterns related to his centers of interest.

When Aitor was 3 years old, his therapist was teaching him to string balls on the string to make a necklace. He had a hard time stringing the balls and suddenly one of the ropes fell to the ground, he looked at it and said “jack.” Aitor could barely speak and no one had taught him to read, but he recognized a pattern in that string.

It was checked if he could read and it was shown that he could not, but he spontaneously memorized visual patterns, especially letters, numbers, shapes, which he associated with images he no longer forgot.

Brilliant in music, memory or calculation

It is also very common for some people with autism to have hyperlexia , that is, the ability to read words early without prior formal education.

But perhaps the most common skill is your far above average ability to retain information and remember it. Information related to one’s own motivation, as it happens in people with typical development: we learn more what interests us and we practice more.

Max, Manuel, Aitor and Luis are truly wise in their areas and they achieve this thanks to their tremendous capacity to store visual patterns. Max, like Manuel, shows severe fine motor coordination difficulties; His high interest in Rubik’s cubes keeps him practicing continuously until his hand movements are extremely fast and appear coordinated.

Max and Manuel achieve excellent hand coordination to achieve success in what they like best: making buckets at high speed and producing music.

It is possible that society does not favor the emergence or enhance the development of those savant skills that all people with autism possess – I daresay. Perhaps, by enhancing those skills, they would have a better chance of accessing the social world and thus improving their relationships until they had friends, like Max.

On this 35th anniversary of the Rubik’s Cube patent application, the whole world should think of people like Max. And every day of the year we would have to recognize the great skills that exist within autism spectrum disorders .