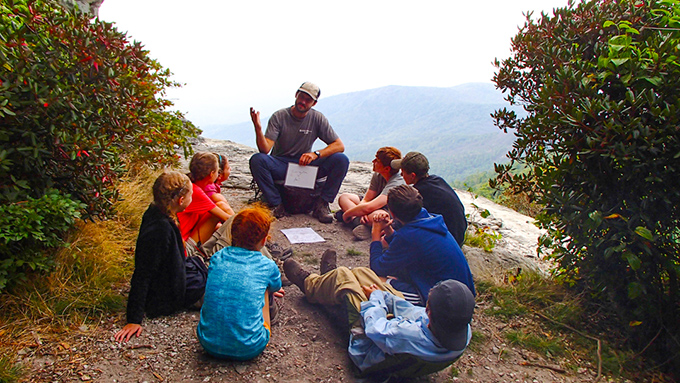 And if we had class outside? In the aftermath of the first confinement, as part of the fight against the Covid-19 epidemic, this proposal was followed by many teachers. Researchers and education staff have taken turns in the media to highlight the benefits of this method of teaching, both in terms of health and for the health of children who are often too sedentary . The previous Minister of Education had also recognized “the pedagogical virtue”.

While the principle of the “open-air, open-air” classroom has its origins in the pedagogical movements of the 19th and  20th centuries  , it currently seems to emerge from a certain confidentiality. Reports thus show kindergarten or primary school classes who, once a week, go out to an outdoor space, near the school, to carry out observations , physical activities or experiments, sometimes very guided, sometimes very freer.

This pedagogical and didactic modality, which can be implemented in both urban and rural areas, is not currently framed by any specific official text. In representations, it has therefore become common to equate it with education for sustainable development. This association can be found on academic sites or educational works .

However, this affiliation is based on a misunderstanding, or rather on a misunderstanding of the general institutional framework of education for sustainable development. This is also in the spotlight with the climate challenge and issues relating to biodiversity. But what do the official texts of National Education say about it? And how is the class in nature anchored in other approaches?

An education in nature management

However, with sustainable development, education is subordinated to an economic perspective of growth theorized at the end of the 20th century  , as a solution to face the challenges of the 21st  century :

“Today, what we need is a new era of economic growth, vigorous growth and, at the same time, socially and environmentally sustainable.” Brundtland Report (1987).

In France, this horizon leads to a distancing from nature and educational practices in nature. By explicitly adopting an ethic centered on human beings and their economic development, environmental education is henceforth apprehended by the rationality and management of the environment, by distancing sensitive and naturalistic approaches, often qualified orally as attention to “little flowers” and “little birds”.

From 2004, and for more than ten years, the word “nature” – in the sense of milieu or environment – ​​was totally absent from official French texts on this education. From 2007, school outings and immersion schemes such as “sea classes”, “snow classes” and “green classes” are no longer mentioned. The 2015 circular is an exception by introducing “nature corners” and again recommending “outings in nature”. In 2020, the outings are present in a parenthesis but the text confines nature to an object of diagnosis or to a heritage to be valued by the students. It is thus subservient to human management.

In other words, in the education for sustainable development in French official texts, nature is neither considered for itself nor as an educational agent. However, it is quite different for a number of practices and orientations in the classroom outside.

An education with nature

It should be noted that outdoor classroom practices are characterized by very diverse objectives. Teachers’ intentions can range from strict curriculum coverage, to student welfare , to reclaiming the child’s place in the city .

When the objectives are strictly disciplinary, the content can therefore be very far removed from socio-ecological issues. Based on nature, sometimes with tools brought in situ (books, magnifying glasses, plastic material, etc.), the students work on mathematics , science, French, visual arts, physical education and sports. Nature is used for formal learning  : blades of grass to count or classify, a stick and the ground to draw graphics, the landscape to draw, to invent a poem or a story, logs to create a journey…

But, beyond that, when practice spaces are sufficiently “wild”, nature can literally enter into educational relationships. It contributes to learning in two ways, either formally, when its manifestations are presented, explained and highlighted by the teacher, or informally, by the simple fact of being there immersion.

The first published works of participatory action research Growing up with nature show that teachers build knowledge on situations experienced outside and unplanned: a passing bird, a change in the season, noises… They also contribute to show that nature is a source of learning through the construction, through experience, of identity links and attachment to the environment.

This informal part, called eco-training , places the education of students in a perspective much more oriented towards the future of human beings than towards a predefined economic program.

An education “from below”

The class outside is therefore not comparable to education for sustainable development as prescribed in the circulars of the National Education. Built by the mobilization of actors in the field, including environmental education professionals who warned in 2008 of the reduction in educational practices outside , it is able to integrate nature into its methods, its objectives and its purposes. It is an education built “from below”, by the “field”.

On the contrary , education for sustainable development is an education “from above” directed by international authorities towards an objective of economic growth. Its backing to the Sustainable Development Goals (SDGs) confirms this trend.

They are now mandatory for any establishment labeling, for example. However, in the SDGs, “aquatic life” and “terrestrial life” are in fourteenth and fifteenth position, well after “access to employment” (in eighth position) or “innovation” (in ninth position). , which clearly expresses the hierarchies at work.

By wanting to fit their practices into existing frameworks, the players come to terms with them and perpetually invent ways of doing things. In this case, this makes it possible to include the class outside in the context of education for sustainable development, but without an awareness of its essence. Especially since the educational institution itself feeds a certain vagueness.

In the recent “Vademecum on education for sustainable development” , one can read some calls for education by nature for the small classes alongside behaviorist and managerial approaches, which are largely predominant. We could therefore conclude that it takes note of the field and incorporates its evolutions and that regardless of the practices, they can all be classified as “education for sustainable development”.

Yes, but basically, for what purposes and in what ethical framework of human-nature relations do teachers see their professional practices oriented? Isn’t this vagueness one of the main obstacles to serious environmental education?

Author Bio: Aurelie Zwang is a Lecturer in education and training sciences. Environmental education. Science didactics at the University of Montpellier