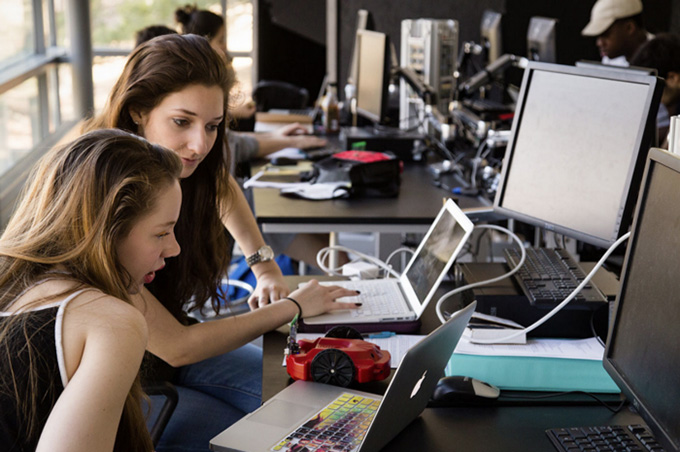 Why in 2022 almost 75% of graduates in science, technology, engineering or mathematics in Spain are men? According to several studies carried out among high school students based on the Abbreviated Math Anxiety Scale (Index of Abbreviated Mathematical Anxiety, in Spanish), women show higher levels of anxiety than boys when faced with the forms of evaluation in math tests.

From these investigations, however, no gender differences emerged in terms of levels of mathematical performance. That is, there is absolutely no gender correlation between the degree of abstract thinking, learning style or personal attitude towards mathematical tasks.

Despite this, it is common for girls to confess as the first reason for not choosing a science, technology, engineering or mathematics degree the belief that they are not bright enough in these fields. Even despite the passion that many female students have for calculus, algebra, and programming, it is not uncommon for them to often perceive themselves as inadequate.

The result is that they move away from these degrees that they imagine are long and too difficult; they believe it will impede their personal fulfillment on other levels, such as hobbies, friends, children, or family.

If we look at the University of Barcelona (UB), with the presence of mathematics and computer engineering studies, the percentage of women enrolled in the Mathematics degree has stagnated below 40% in the last ten years.

The area of ​​Computer Engineering is especially worrying, in which the presence of women is almost anecdotal, with only 15% of women enrolled in this degree last year. This is one of the most masculinized areas of technology, in which there are clear and persistent gender imbalances.

Where does this bias lead?

On the one hand, many scientific vocations and, with them, the wealth of talent, are lost along the way. Empathy, cooperation, ability to work in a group or collaboration are just some of the skills that are traditionally applied to careers such as Medicine or Psychology, but which are now essential in any discipline.

On the other hand, this gender gap excludes half of the population from fields vital to our future. Big data , artificial intelligence, cybersecurity and video games are already part of our daily lives, and they are sectors where positions of power and influence should not be held only by men.

Who are they and what do they say?

As they themselves tell us, the students of the double degree in Mathematics and Computer Science and the degree in Computer Engineering at the UB choose these careers because they have very diverse concerns and hobbies, from modern dance and singing to skating, surfing, volleyball, athletics or boxing.

There are those who study Japanese and who draw, paint, sew; who practice cosplay , who enjoy mountaineering, who go out with friends or with their partners, or who relax reading a good book, watching Barça or playing Animal Crossing on the console.

In short, they are normal and earthly girls, with their passions, their friends, their challenges and their doubts. In general, they identify themselves more as science than letters, with curiosity to learn and creativity. At a certain point in their lives, they opted for mathematics or computer science.

Carla Morral , a Mathematics-Computer Science double degree student at the UB, tells us that her favorite subject has always been Mathematics and at the age of 11 she was already trying to figure out how to reconfigure her iPod.

Although not all were so clear. Estíbaliz Martínez, also a double degree student, tells us that he decided at the last moment after the Selectividad, and somewhat by default, looking for degrees that had multidisciplinary professional opportunities.

Once in the degree, they have found very diverse subjects, challenges to overcome and great co-workers. In general, in the double degree they feel welcome and recognized for their work.

Not everything is good. Especially in an environment as masculinized as computing, they often feel alone, going the extra mile to be recognized for their skills. Surely, as Aina Ferrà, a doctoral student in Mathematics and Computer Science, affirms, the fact of increasing the female presence in the degrees would make the girls feel more comfortable when choosing these studies.

The vast majority, as statistics show, finish their degrees. Not only do they finish, but they also do so with a double degree. When asked if they would repeat the experience knowing, as they do now, what awaits them, the majority answered in the affirmative, without any hesitation.

Each one of them has been a girl who has followed the call that she heard one day when she was facing a mathematical problem or learning to code.

Some will join the business world and help develop projects to advance new technologies. Others will opt for teaching. A few will access management positions.

But all of them agree on the same point: if we want to evolve as an open society, much more inclusive and plural, we need to have the talent and the gaze of all those women passionate about mathematics, engineering and computer science who still doubt.
“Don’t be influenced by any other opinion.”

Clara Zabala, student of the Mathematics-Computer Science double degree at the UB.
“If you are convinced that it is what you want, do it. Because if you like it now, when you discover how broad and multidisciplinary these areas are, you will like them even more”.

“We can do what we like and all the women in the program will accompany us, each classmate, teacher, director… girls help girls !”

“You are not less than anyone, you are not dumber than anyone, they are not studies for boys, it is not a field for boys. What you want to do you can do. But never let anyone convince you that you carry all the responsibility of your gender on you. You deserve to be wrong, take your time, leave it and resume it and that’s not why women are worse in this field.

Aina Ferrà, PhD student in Mathematics and Computer Science.
Right to decide, to choose, to make mistakes. And in the words of T.S. Eliot:
“Only those who risk going too far can find out how far they can go.”

Author Bios: Anna PuigPuig is a Full Professor, Computer Languages ​​and Systems, 3D Visualization and Joana Cirici is a Professor of Mathematics both at the University of Barcelona