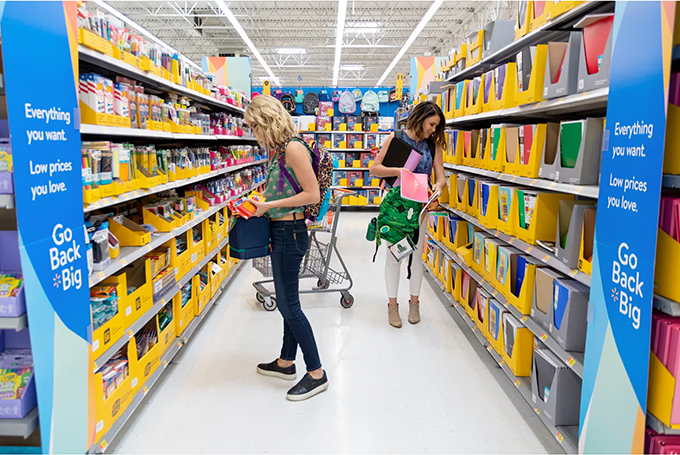 As summer draws to a close, it is time for many to think about back-to-school shopping, such as notebooks, backpacks and new clothes.

As an economist who has studied consumer prices for years, I wondered how soaring inflation was affecting the costs of typical back-to-school gear.

Consumer prices rose by about 8.5% in July from a year earlier, according to the latest data released on Aug. 10, 2022. But this figure is only an average. The price of some items, like airline fares and gasoline, has jumped a lot more than that, while the cost of other items, like the price of televisions and phones, have actually fallen.

To determine how the cost of paying for what school children need has changed, I tracked two sets of prices: First, the cost of back-to-school necessities. Second, the price of school lunches – since learning on an empty belly is hard.

Children often seem to sprout during summer vacation. This growth typically means they need new clothes for fall’s cooler weather. The U.S. government’s consumer price index has been following the price of both girls’ and boys’ clothes since 1977.

Going back to school also means new shoes, since kids’ feet grow too. The average price for boys’ and girls’ footwear has risen steadily since 1977. In the past year, the price of shoes and sneakers climbed by almost 8%.

As for school supplies, inflation has been a mixed bag. The price of notebooks and paper has soared in the past year, by 11%. And while the consumer price index doesn’t track pencils, markers and crayons, its close cousin, the producer price index, shows retailers are paying 11% more than they did last year for pencils and markers, while art supplies have climbed almost 18%.

The prices of backpacks, on the other hand, increased at a much slower pace, up about 4% in July 2022 from 12 months earlier. And if your child needs a new laptop or tablet, you’re in luck. The price of computers has actually fallen by almost 4% from July 2021.

Putting these categories together into an equally weighted index suggests the cost of going back to school won’t hurt your wallet as much as parents might fear. My back-to-school index rose about 5.1% in July from a year earlier.

The index also shows prices are virtually unchanged from about a decade ago. This is small consolation for parents who didn’t have students in school 10 years ago. However, it does show that the prices of back to school items are not always increasing. 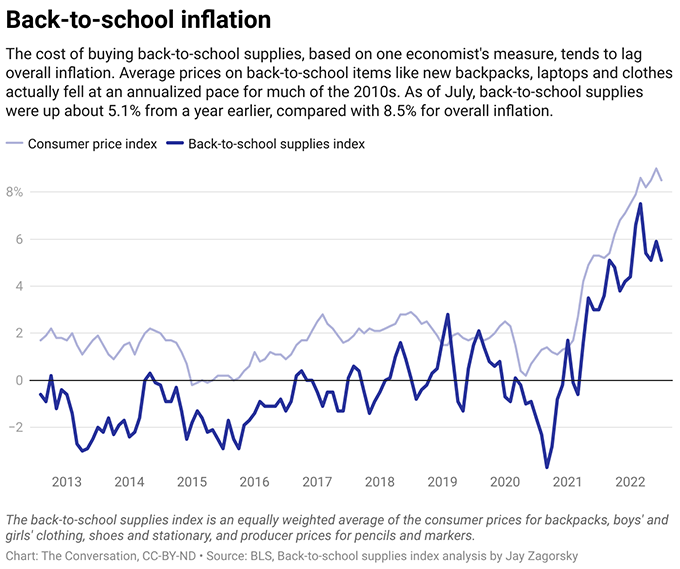 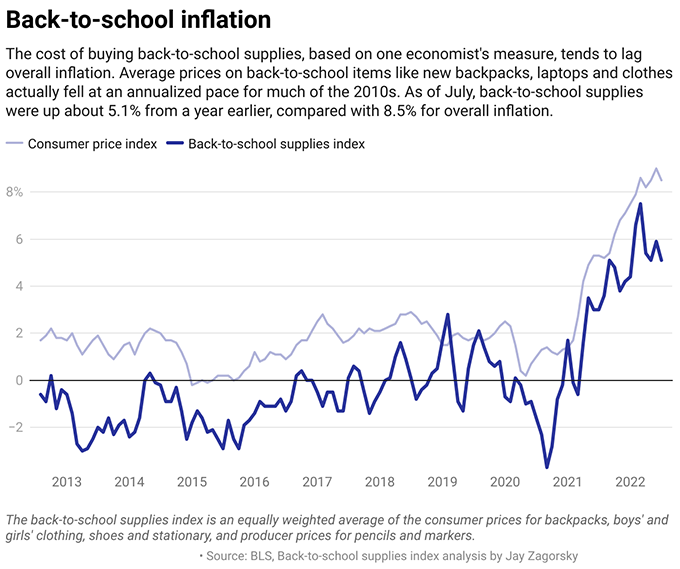 Another major cost when going back to school is buying lunch in school cafeterias.

Pre-pandemic data suggests close to two-thirds of students were buying lunch at school. Consumer price data shows the cost of food in urban elementary and secondary school cafeterias was down 43% in May 2022 from a year earlier – the latest figures available.

In fact, the index level is about the lowest since the index began tracking the data in 2005, primarily because there was universal free lunch during parts of the pandemic. That program has now ended, though some states are stepping in, so lunch costs are likely to climb in most school districts in the coming year.

For families who prefer to pack school lunches for their children, the data looks much worse. The average price of food purchased for home preparation surged 13.1% in July from a year earlier, the fastest pace of inflation since 1979.

But since that may not reflect the actual cost of the food in a child’s lunchbox, I did my own calculation based on what my mother packed for me when I was a kid: peanut butter and jelly sandwiches, which remains a staple today – though not for my children.

My lunchbox typically consisted of a PB&J sandwich on white bread, apple slices, a few baby carrots, a bag of potato chips, 8 ounces of milk and a chocolate chip cookie – to keep me happy. Using the U.S. Department of Agriculture’s school lunch buying guide, I found the portions that would provide about 666 calories, a touch more than recommended by the government. My personal lunchbox index jumped by over 13%.

That was mainly driven by the jump in the price of bread, peanut butter, milk and potato chips, which all climbed by more than 14%.

While most prices for going back to school are rising more than usual, there are still bargains to be found, such as in children’s clothing and computers.

Or in the lunchbox example, you could add more apples, whose price has climbed only about 5%. Including more apple slices could not only ease your wallet but also improve your child’s nutrition.

Prices on most goods may be a lot higher than a year ago, but it’s important to remember that not everything is undergoing sky-high inflation. With careful shopping, even families on a tight budget can find what they need at a price they can afford.