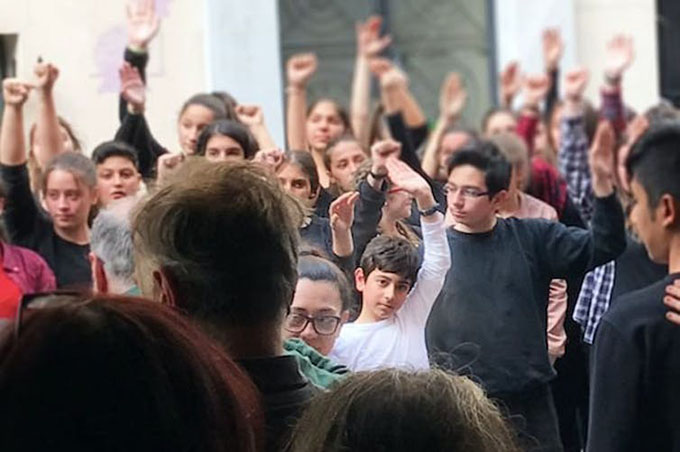 Today’s young people deserve to be heard. But, because of all of our technological distractions and polarized political systems, listening to others is becoming increasingly difficult.

Philosopher and political scientist Roman Krznaric recently wrote an eloquent column on the harrowing prospects of “short-termism” for young people. My research has delivered a similar warning. Our survey across five global cities found a strong co-relation between age and diminished hope. As young people move from puberty through the teen years to early adulthood, they lose hope.

Recently, a documentary play Towards Youth, written by the award-winning Andrew Kushnir, had its world premiere at Crow’s Theatre in Toronto. The play brought to vivid life the urgent call made by Bella, a Toronto high school student: “How are you going to hear me?”

The play was built from a decade of ethnographic research on hope, care and young people in drama classrooms in Toronto, Coventry, Athens, Tainan and Lucknow.

The drama classroom became a forum for the creative exploration of civic engagement. Students asked: Who am I, relative to others, and what compels me to act upon my world? We have been especially interested in what might be learned about our relationships to ourselves and our relationship to others.

We also conducted surveys which asked youth about their experiences of hope, care and the role drama played in their lives.

The research team transcribed hours of video footage and interview data and shared it with Kushnir who as an embedded playwright traveled to all the sites with the research team.

In an interview with a local Toronto website, Kushnir said:

What are moments when global crises and systemic pressures can be read in something a young person or teacher says or does? These are things I’m paying attention to. I think the main theme and argument I’m trying to dramatize is that in many drama classrooms, the substance of a young person’s life is part of their learning. Who you are matters. (https://torontoguardian.com/2019/02/towards-youth-play-radical-hope/)

While hope can be a shared vision, it can also be a deep source of divide. Perceived minority/majority status based on ethnic, religious, gender, caste, socioeconomic class, Indigeneity, race and family-based stigmatization fundamentally shapes young people’s experiences of, and orientations towards, hope.

Students who believe they are in the majority (50 per cent of those surveyed) tend to find hope by positioning themselves toward the future and exploring collective artistic engagement. Those who identified in the minority find hope differently, and benefit from safe and authentic dramatic self-reflection on their present experiences.

In Toronto classrooms, we witnessed tensions between racialized young people and their relationship to policing. Many students expressed anxiety about their future possibilities and expressed cynicism about mainstream political systems and exhaustion with a “post-truth” world. Youth also expressed their concerns about mental health support.

In Coventry, many of the young people we worked with felt at odds with older generations in the UK who voted to leave the EU. They expressed frustration about not being able to vote in a referendum that would profoundly impact their futures, their work and life prospects, and were worried about the adverse effects of Brexit on their families.

In Athens, the young people we spoke with had lost faith in political and social systems. They have never lived outside a culture of crisis: economic and humanitarian. They were worried and deeply troubled, not only about their futures, but also their present financial hardships and the refugee crisis for which they had feelings of helplessness.

A poster for ‘Towards Youth’ which premiered in Toronto last month. Andrew Kushnir/Project Humanity/Crow’s Theatre

Not all the news was bad, however.

Our research collaborator in Lucknow, India, Urvashi Sahni, articulates that the young women and the teachers at Prerna, their influential school for underprivileged, lowest-caste girls were hopeful about their capacity to resist gender oppression because of the feminist, activist and theatre education they had received.

Theatre allows encounters to unfold that would be otherwise impossible. In the intimacy of a shared space, in a darkened room, an audience can aspire to be in relationships with neighbours, near and far.

Research-based theatre brings new audiences to scholarly work while restoring theatre to its origins as a forum for public debate and deliberation. Theatre has the potential to activate social commentary on human life that is increasingly virtual, fractured and uncertain, through an appeal to our human impulse to feel a problem and imagine its solutions.

The character Urvashi tells us in the play that the word “adjust” is popular in India and is used when one is urgently communicating a need. “Adjust” is the clarion call of Towards Youth.

In the final moment of the two-hour play, the beautiful ensemble of nine actors who together play 35 young people and 21 adults over three continents turns to the audience and invites them to hear what young people are telling us.

Drama is about dreaming

In the play, the character Kathleen says, “Drama is about dreaming.” Dreaming can be playful, but it is also serious work especially given that as young people grow into young adults, they lose hope.

Through the building of an “ensemble” and engaging in the collective process of theatre-making, young people can learn some of the critical skills necessary for an increasingly fractured world through struggle and disagreement, difference and solidarity.

Drama gives young people a rehearsal space to develop care for self and others. In response to the increased anxiety students develop with age, our research suggests that the collaborative engagement offered by the drama classroom provides important reassurances for youth. It shores up hope.

Author Bio:Kathleen Gallagher is a Distinguished Professor, Ontario Institute for Studies in Education at the University of Toronto