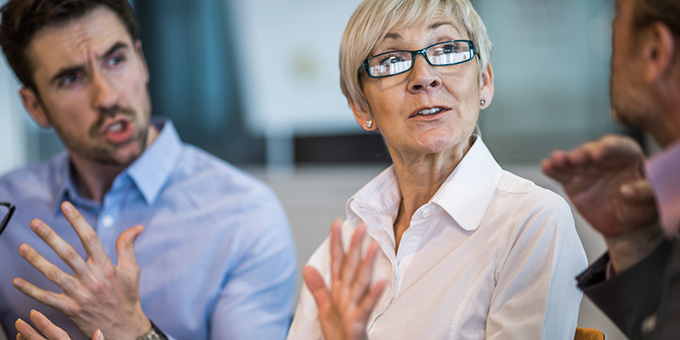 Senior businesswoman telling her colleagues to stop arguing on a meeting.

Words have consequences. They can make us feel love, anger, fear, hope. Those emotions, depending on how strongly they’re felt, can incite actions.

Communication scholars, ancient rhetoricians, legal scholars and psychologists have all studied some of the most basic pathways along which words do their work — how love is sustained in lasting relationships, how political leaders rally troops to war, how treaties are made or conflict de-escalated.

The effect of words is both a concern in our interpersonal and social interactions, in which small acts of incivility can leave us feeling anxious and angry, and in our political discourse, where some Canadians worry about whether Trumpist rhetoric is making Canada feel like a more polarized and dangerous place.

At the grocery store, political protests

Whether we are talking about civic rudeness at the grocery store where strangers seem more inclined to insult or offend one another — including in racist ways, as evidenced by a spike in anti-Asian racism during the pandemic — or how we conduct ourselves in political protest, the rhetorical techniques likely to amplify conflict and tension are relatively easy to spot.

When deciding what to amplify online or in civic discourse, we can improve how we contribute constructively to our society’s fragile social predicament if we’re aware of the most prominent seven rhetorical tactics that are likely to amplify polarization, leading to anger and potentially violence. Research shows that divisive, violent, dehumanizing rhetoric can sanction negative or hateful views that people may otherwise have hidden, and embolden people to act on these.

What’s worse, these seven rhetorical tactics tend to beget one another and inspire a communication cycle in which emotions are amplified and conflict is escalated.

1. Division/Identification: We often try to understand the world by looking for similarities and differences. This tendency manifests itself in communication when we try to draw a clear line between an “us” and a “them.” We then look to strengthen these divisions by celebrating what “we” stand for and denigrating what “they” believe in — liberal versus conservative, left versus right, and so on. These divisions can leave people feeling a stronger sense of identification with their in-group and a stronger hatred for the out-group. Any time we hear someone use “us/them” language, we ought to pause to recognize that this division is a rhetorical invention — and we ought to ask what kinds of work this invention is designed to do.

2. Hyperbole: This word comes from the Greek for “overthrown” (as in a ball launched too far to be caught). Hyperbole is a creative inaccuracy meant to exaggerate or highlight some property of an event or person in order to intensify some feelings. This is the favoured technique of the internet troll. Exaggeration can drive attention because of the ways in which emotions are amplified. When hyperbole is combined with “us/them” rhetoric then you are certainly on a pathway to violence. Hyperbole does not lead to rational deliberation; it’s not intended to have that effect. If your child tells you it’s the worst day of their life because of homework, or if a political commentator suggests that the Liberals use of the Emergencies Act is an unprecedented over-reach of government power, both are committing hyperbole to get your attention and amplify your emotions.

3. False equivalence/false analogy: American entrepreneur Elon Musk recently compared Justin Trudeau to Adolf Hitler. This is a false analogy. Vaccine protestors comparing their treatment to Jewish people during the Holocaust is a false equivalence. Like hyperbole, these are exaggerated attempts to amplify feelings of division and stoke emotions. To argue against the comparison between Trudeau and Hitler will only further amplify emotions because the comparison starts from a position of unreason. A false equivalence is a sure sign that the speaker wants conflict and wants to heighten emotions.

“Holocaust distortion can act as a ‘gateway drug’ to conspiracy theory and more dangerous forms of antisemitism. And it’s used to recruit, to radicalize, and to sow broad cultural and social discord,” says @WmsRobt in this article from @ShareAmerica: https://t.co/Li3dv3pJ25

4. Appealing to force: Arguments that appeal to force or threat — in the western rhetorical tradition called “ad baculum” arguments, from the Latin that means “appeal to the stick” — are the most obvious form of communication that can lead to violence. When we threaten someone, whether we tell our child we’ll spank them if they don’t go to bed or our political opponent that we’ll ruin their career if they don’t vote a certain way, we have abandoned any attempt to persuade and instead are trying to force compliance. Words, in these cases, are weapons, directly intended to exert power.

5. Name calling: Calling someone names instead of engaging their arguments — or taking an “ad hominem” (Latin meaning “for the man”) approach — is another way of amplifying conflict and creating a pathway to violence. My last article in The Conversation produced a string of emails calling me a range of nasty names: libtard, cuck, fascist, soyboy, Marxist, etc. None of the name calling engages substantive reasons or arguments, but instead simply aims to amplify feelings and conflict.

6. Objectification: When we treat other people as objects, beasts or vermin instead of people, we make it easier to commit violent acts against them. Former President Trump did this repeatedly by comparing immigrants to animals; men do it to women when they describe women only in terms of sexualized body parts. This is the process of reification, and it steals from other people their humanity and complexity in order to amplify emotional disdain.

7. Overgeneralization: This is a distorted way of thinking that draws conclusions that are too broad to be justified. Any time someone says a version of “All X is Y,” we have an overgeneralization that cannot possibly be right. The purpose of this kind of distorted thinking and communication is to advance a particular position that often strengthens an us/them division and amplifies emotions directed toward whoever the speaker is generalizing about.

In all of these cases, these forms of communication seek to get our attention, make us feel some emotion more strongly, lead us away from reason and deliberation and lay the groundwork for fear and aggression.

If we learn how to disengage from communication circuits that lay the groundwork for fear and aggression — whether by carefully choosing how to respond to social media content or what to share online, or the language we choose in our personal and civic interactions — we have a better chance of amplifying dialogue that is constructive and does not fuel polarization and potentially violence.