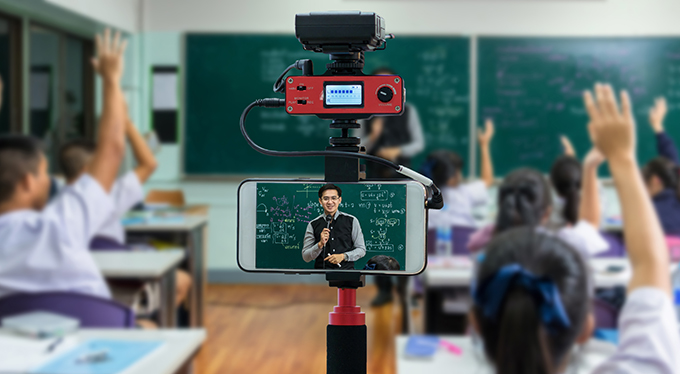 Would you know how to change the double push – button discharge mechanism of your house’s cistern? How to prepare an apple pie? And how to make a French braid? Surely you have answered no to any of these questions, but I am sure you would know where to consult to learn how to perform these tasks. “How to do …” searches on YouTube continue to grow 70% each year .

70% of millennials (people born in the last two decades of the twentieth century) usually use YouTube to learn or deepen their training interests. In fact, they prefer triple learning through a YouTube video than reading a book . So much so, that 67% say they can find on this platform a video of anything they want to learn .

Phenomena such as David Calle, founder of the educational website Unicoos and finalist of the Global Teacher Prize 2017 (international award rewarded with one million dollars, with more than 20,000 nominations), offer some surprising figures.

His YouTube channel has more than 700 videos of Mathematics, Physics and Chemistry and has 1.5 million subscribers. In 2015, Unicoos was chosen by Google as the channel with the greatest social impact in Spain. Are we facing a real revolution in the educational model or is it a passing trend?

As we have changed

In 2012, the so – called ” post – PC era ” began. Since then, there are more mobile devices (phones and tablets) connected to the internet than desktops and laptops. Our eyes are exposed to almost 10 hours of screens per day, with a growth rate maintained in the last 5 years , and the mobile phone has become the reference tool par excellence. On average, we unlock the phone more than 220 times a day , and this very high use has its repercussion also in the teaching field.

The main characteristic that students value regarding the use of technology is mobility. Being able to study anywhere and at any time. In addition, the preferred feature of the use of technology in the educational field is the improvement in the quality of the content, compared to other skills such as communication with teachers or classmates or the possible saving of study time.

According to the same source, 94% of students say that the use of technology has facilitated the learning of new concepts. The leading platform for consumption of digital content is YouTube, with 87% of students who use it frequently.

The educational one is the second category of most consumed video in Internet (only below videos of humor and comedy). Does this consumption correspond to an efficacy of the medium? Is there any scientific evidence in this regard?

We know that our senses evolved to work together, with each other. For example, in the McGurk effect, vision influences the ear; we do not perceive in an isolated way, but the brain integrates multisensory information. This has a direct implication that we learn better if we stimulate several senses at once.

These results are not new. The initial experiments of Mayer showed that multisensory learning problem solving (narrated text and animations) improves outcomes double that of unisensory equivalent written text and images.

Analogously, in his theory of dual coding , Paivio argued that the use of mental images helps learning. The visual information (which we consume by sight) and verbal (auditory) information is processed differently, in different channels.

When both channels are used in parallel, the stimulus is encoded in two ways and is more likely to be remembered later. The problem comes when we verbalize information from the visual channel (for example, when we read a text). The tracing of letters forms words. The brain has to decode this visual information to verbalize the information.

Both channels are occupied in an artificial and learned way (remember the effort that costs us in the first years of life to learn to read and write). For this reason, we can not read and listen at the same time (have you tried to have a telephone conversation while reading an email?), Or it requires much more effort (and we enjoy less) to watch movies with subtitles than those whose speech we understand directly without need to read

In his complete theory of multimedia learning , Richard Mayer establishes a decalogue of 12 principles that confirm that people learn in a much deeper way by combining words and images and animations that only with words or graphics independently. Thus, the video format is positioned as a natural element of highly effective information transmission.

The era of change

In this new millennium we have significantly changed our quality standards and consumption habits. For example, in the case of cinema, plane changes happen much faster. In the middle of the last century, the average duration of each plane oscillated between eight and eleven seconds. Nowadays, much shorter ones are edited, with an average duration of between two and three seconds .

Demand for a fast and direct narrative rhythm

In the field of teaching, the standard for teaching content is being set by the best teachers in the world, publishing their classes on the web. The student can choose to explain the content to their favorite teacher.

One of the most famous cases is the Khan Academy , founded in 2006 by Salman Khan. With more than 4,000 videos that have been viewed more than 1,500 million times, it is the benchmark of global education in primary and secondary education based on instructional videos. The founder of the Khan Academy, Salman Khan, aims to “provide a free world – class education for anyone, anywhere”, and received the Princess of Asturias Award for International Cooperation in 2019.

What is the inverted class?

This model of “wise on demand” is creating new teaching paradigms, such as the inverted class , where the content of the lesson is consumed at home and the activity in class is dedicated to what the student can not do autonomously at home.

It is the opposite that is usually done in master classes, where the student is basically a note – taking machine. Thus, the most autonomous part of learning is done at home (see teaching videos or reading content in written text), and in the most active part (resolution of exercises, problems or debates between students).

The role of the teacher in this model changes completely, departing from the traditional master class. The teacher now accompanies the students in a more individual way, taking into account their motivations and particular needs. The teacher becomes a coach .

Although we do not have definitive scientific evidence, some surveys conducted in the Flipped Learning Network to more than 450 professors who use this new methodology result in 2 out of 3 cases increased scores in the evaluation tests and 4 out of 5 said an increase in student motivation.

New focus. New Times. There is so much to do. We are not facing the era of change, but before a change of era. And this future, from the classroom, looks wonderful.