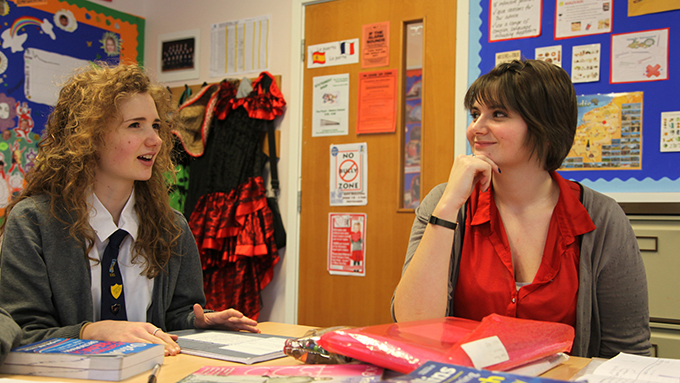 To describe the French school in its current organization, the usual expression of “unique school” seems quite relevant: it is an institution open to all, offering each student the same programs, the same possibilities courses, and masters trained identically.

From all these points of view, the single school is presented as that of equal opportunities. His device was in place between 1959, when the decree Berthoin carries the compulsory school at sixteen, and inviting all students to continue their journey beyond elementary education, and 1975, when the Haby reform establishes the single college.

But more than half a century after its birth, the single school has in no way become that of equal opportunities. Worse, it fails to bring into the written culture a significant share of students, especially those from the lower classes.

The persistence of popular failures over the decades, despite all the measures supposed to put an end to them, could invite to see there some natural and inevitable phenomenon. We will then talk about the unsustainability of socio – cultural handicaps that affect failed audiences.

In addition to the daily and ever – repeated experience of the learning difficulties of the pupils concerned, this conviction can be nourished by teachers’ scholarly description of cultural and linguistic inequalities.

By the early 1960s, the sociolinguist Basil Bernstein insisted on the link between language skills and school inequalities, drawing in particular on the lexical inferiority of the popular classes observed since the 1920s. Pierre Bourdieu and Jean-Claude Passeron spoke of in its wake “the unequal distribution between the different social classes of the linguistically profitable capital”.

This, however, does not provide proof of an insurmountable cognitive disability of students of popular origin. Socio – cultural inequalities could lead to an understanding of inequalities in educational attainment – for example, all young people get their baccalaureate , with only “heirs” getting a mention. But what we are dealing with today is something else, a real opposition between failure and success, the first being quite radical in a very large number of cases.

The question posed is not that of the inequalities between the publics welcomed by the school. The question is whether those who arrive with the least resources have enough, or not, to normally enter the written culture.

On this point, the convergence of the conclusions of the linguistic, sociological or cognitive approaches is striking: oral language, whatever the variations of its use, provides by itself the essential tools of the human thought which are the capacity of abstraction , reflective analysis, and logical reasoning.

All children enter the CP equipped with this mental tool, which includes all that the school needs to find, among its beneficiaries, in the potential of rational thought, to lead satisfactorily their appropriation of the written culture.

If it does not succeed, it is not the fact of the incapacity of the interested parties, but pedagogical models which fail to mobilize the intellectual resources of the public in difficulty.

To elucidate the mystery of the origin of the school inequalities thus implies to look frankly at the school institution, and to open the black box of the process of transmission and appropriation of knowledge . A truly critical sociology must therefore tackle the question of pedagogical devices that are set up under the single French school system and the teaching practices that result from it.

The course of the primary

School destinies are played for many from the primary . They are even more dependent on the initial entry into the written culture during CP’s year. The precise observation of the teaching practices of reading and their effects on the differentiated learning of students allows us to isolate those that are most effective towards students from lower classes.

However, these effective practices are today statistically minor in the French education system. This is a very important margin of progress for improving the entry into the written culture of today’s most disadvantaged students.

What about secondary education? While cognitive learning at the beginning of the sixth year is decisive for the rest of the school, the school inequalities nevertheless continue to widen over the middle and high school. How to explain this? Certainly, again, by a precise examination of the running of the French school.

Adapting to the learning difficulties of vulnerable students often requires a moderation of intellectual requirements . This leads inevitably, on the register of educational content, to give less to those who have less, and thus to dig deeper into secondary education school inequalities already very visible at the end of primary.

How to get out of this situation ? Sociology has no pedagogical or didactic models to propose. But it has an effective weapon: its ability to investigate the real, identification of contradictions and points of blockage. In fact, much remains to be discovered about what is going on in the secrecy of the classroom, in both primary and secondary education.

The real range of teaching practices is a field largely open to sociological investigation, particularly with regard to the diversity of the “do – it – yourself” modes adopted by those teachers who are attached to the effective success of the weakest students. Such an investigation would benefit from questioning the effects of these teaching practices, which seek to maintain a high level of cognitive ambition with popular audiences.

This type of survey is rather rare in sociology, particularly in France. This is a crucial issue for the future of the education system, and a privileged object for research that would seek to identify places where practices are experimenting, striving to break with the common pedagogical paradigm, to evaluate and interpret their effective.

This perspective would be able to highlight, by mirror effect, the intensity of the reproductive character of the currently dominant educational devices and practices in the school system. And so to describe and submit to the empirical test the democratic potentialities of this famous “rational pedagogy” that P. Bourdieu and J.-C. Passeron called for more than half a century ago.