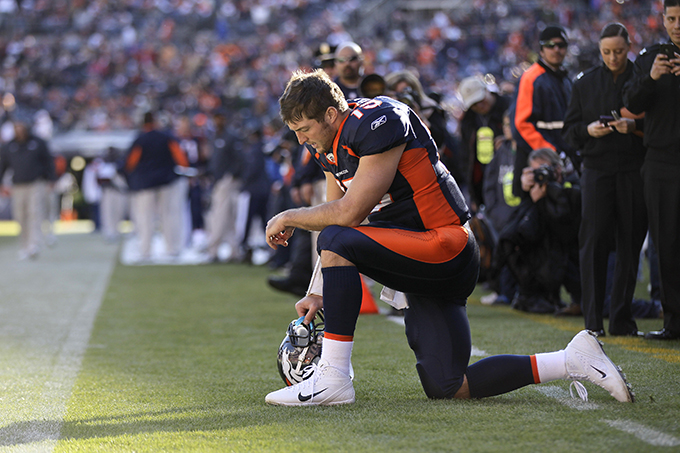 The whole country is a’twitter (see what I did there!) about players kneeling in protest of the national anthem. It’s amazing how quickly people forget…do we not remember Tim Tebow?

Actually, it’s quite understandable that we’ve forgotten Tebow, since the mainstream media, for some reason, won’t remind us. Anyway, wayyyyyy back in history past, around 2011, there was this football player, a quarterback even, Tim Tebow.

He knelt at football games. And the media shredded him, poured endless hatred upon him.

–I watch Bill Maher’s Left Wing Hate show every week on HBO, and of course they’re losing their mind over this fracas. It’s amazing the bubble they’re in, nobody on the show pointed out possible inaccuracy here, and the audience cheered at the “correct” analogy. My memory isn’t the best, but it really seems like he won something…

But now the media is praising football players who kneel…I really don’t like the different response here. Tebow knelt in prayer and homage to God, and was destroyed for it, while our football players are kneeling for…what, exactly?  Protesting the flag? I think it’s a protest for Black Lives Matter, or against America, or something. My best guess is they’re protesting police mistreatment of certain citizens. Hey, I think our police are grotesquely overreaching their powers, and concede protests should be made. But those football players are paid $50,000 an hour to play football, not protest. They should do it on their own time.

Tebow and the other players’ kneelings are protected as free speech even if some disagree with it, and while I make no assertion of approval for one or the other, it’s very striking that media hates Tebow and loves the other kneelers. Free speech is a great ideal, and I’m all for it but…reality is an issue, too.

Bottom line, your average football fan, you know, the guys who ultimately pay the multimillion dollar contracts of the players, are getting ticked off at making politics a part of what should merely be an ultraviolent game. The fans cheered Tebow, but the media screeched him off the field. The fans are booing the kneelers, but media doesn’t cover that.

The media ignores the people, and is puzzled that the people are tuning them out.

Trump is something of a successful businessman, and so he gave the owners a bit of business advice: get rid of employees who insult the customers. The media has twisted his message a bit, but ultimately Trump has a point because infuriating your customer base is bad for business. The media naturally poured hatred on Trump for the unsolicited advice but, I dunno, that seems like a pretty basic idea. Even if Trump was a failed businessman, I’d have to consider this as a decent suggestion.

The owners of the NFL, the guys who are trying to run their sports business to make a profit, are really puzzling over what to do. For the most part, it looks like they’re going to stick to the media-suggested plan and continue to annoy their fans, but I’d like to think they’re still open to input.

Their main options here are either a) more appeasement of players or b) realize they’re a business, and no business can survive by insulting and thereby eliminating the customer base. What to do, what to do?

Even though I honestly don’t care what happens to the NFL, I do care about rational decision making. Ignoring Trump strikes me as a poor idea (ignoring him failed spectacularly during the last presidential election, after all), but I concede that maybe Trump’s words are wrong here.

Words are one thing, but how about empirical evidence? Well, as luck would have it, I rather follow higher education, so I have some data here the owners of the NFL should consider.

Mizzou university was one of the first schools where racial incidents were becoming a regular thing, wayyyy back in 2010 . Admin got in on the act in 2011 by forming fiefdoms filled with Vice Presidents of Diversity whose express purpose was to make things worse. Years of work by these highly paid professionals succeeded in keeping racial issues a huge problem on campus.

The football team rose to prominence in one of the more recent waves of protests, around 2015, when they used extortion to get rid of the Poo Bah there, among other concessions. Now, here’s the thing: as soon as the football team started their shenanigans, the administration there should have recalled the core purposes of the institution: education and research.

Based on this understanding, rather than appeasement, the administration should have simply gotten rid of the football team. Football teams are as irrelevant to higher education as political protests are to a football game.

(Digression: those protests should be irrelevant to the game, but what if the protesting players allow their quarterback to become injured because he didn’t join the protest? The mainstream media blackout on this story is predictable.)

In addition to not following the mission of higher education, there’s also the issue of keeping your customers happy. Mizzou, like the NFL owners, doesn’t seem to get this point. By making their school famous for race riots, the school has basically destroyed its customer base. They’ve closed 7 dorms now because students don’t want to go to a school with race riots and a system of appeasement which can only debase education further is likewise unattractive to potential students. 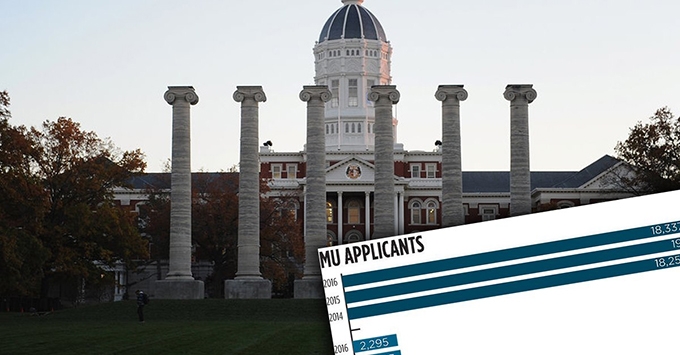 Mizzou killed their customer base…are you paying attention, NFL owners? Now, maybe the owners aren’t really businessmen, and are instead football purists. This would explain their reluctance to get rid of the employees angering their customers: the owners want great football players, and are willing to sacrifice the NFL for it. I again point out that letting the players have their way might lead to them throwing games as they escalate their protests…the “sport” will definitely die then.

A ridiculous thought? Perhaps, but Mizzou also has a football team they were unwilling to eliminate, at the expense of their customer base. How’s football at Mizzou working out?

Again, I don’t particularly care for college football, but “dumpster fire” should be a pretty strong indication that whatever Mizzou is doing, the NFL owners should do the opposite.

As for the football team, which saw millions in donations disappear overnight, well, it’s now a full-fledged dumpster fire.

Part of the customer base in Mizzou is the donors…making them angry is just bad business. You don’t need Trump to tell you that. The Mizzou “leadership” doesn’t know the basics of how to run a business despite all those (bogus) Ph.D.s in Leadership and Leadership Awards it grants itself. Nevertheless, admin is trying to make some lemonade from the lemons it gave itself, and it bears comment:

Meanwhile, the seven dorms the university can no longer fill with students are now being converted into makeshift hotel rooms for the fans still willing to show up to the games. “We had a total loss of about $5 million, so you’re talking zero (dollars) if we do nothing versus $60,000 (three games in) …

Now, absolutely, Mizzou should try to get some money off all those abandoned (and in some cases, never been used) dorms, but I want to point out how infuriating this is. The administrators responsible for building those useless dorms? They received all sorts of money for their “leadership” and “vision” even as they’ve stuck the taxpayers with millions in unpayable bills leading the university down a path any chucklehead could have seen would fail. Yes, getting $60,000 from hotel fees helps a little, but realize the fiefdom of administrators who came up with that brilliant idea will receive several hundred thousand in pay raises and bonuses for their cleverness.

We really, really, need to re-think how we run our institutions.

In addition to losing students and losing donations, the football team is losing games. Appeasement really is a lose/lose/lose decision. We now have empirical evidence for the wrong thing to do in the face of these inappropriate protests.

Will the NFL owners heed empirical evidence? Seeing as one NFL player was actually forced to apologize for respecting the national anthem, even though his actions made the customers happy…I suspect not.

Now, I won’t be broken up if the NFL owners’ irrational behavior leads to great harm, possibly even the annihilation, of the NFL. But it is curious that there is no widespread pointing and laughing by the media at their strange decisions…even as the media has no trouble laughing at the idea that “don’t enrage your customers” is good business advice.