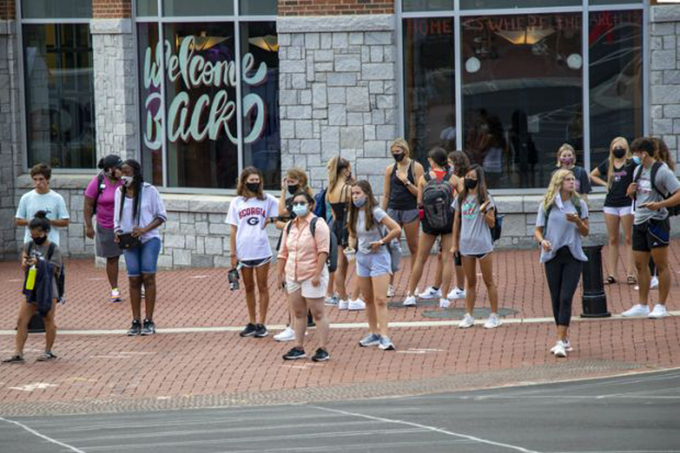 Whatever the country, the academic year generally begins with a time dedicated to informing newly enrolled students. A welcome period to which French establishments are increasingly attentive to help each student get off to a good start and fight against dropping out, while only 29.6% of baccalaureate holders entering the first year validate a license in three years – and 43.6% in three or four years.

If this first contact between students and their university or school is a springboard in the construction of personal projects and dialogue between promotions, it can also play a strategic role for establishments in a context of international competition. This is shown by the example of the United States, where this time of welcoming takes on a very particular scale, mobilizing more energy and resources than in the rest of the world.

At a time when the consequences of the health crisis are still weighing on student life, whether in terms of mobility or mental health, how are universities rethinking their back to school, between tradition and innovation?

Across the Atlantic, the one that is generally called “orientation week”, but whose duration can be counted in days or weeks depending on the university, has become a real institution, almost as much as the graduation ceremony. Contrary to what its name suggests, the orientation of first-time students is indeed not the only function of this program.

The oldest universities, especially those that are part of the “Ivy League”, have introduced integration systems for several decades. In a highly selective and elitist context, the aim is to ensure that new students adhere to the values ​​and the educational project that distinguishes each of its universities.

A system of mentoring by peers or by teachers allows “freshmen”, ie first-year students, to integrate their new community as quickly and easily as possible. The integration program can thus take the form of sports, artistic, spiritual, recreational team activities, or even integration trips outside the campus, generally in the middle of nature.

Since 1974, Princeton University has welcomed its new students by sending them on real outdoor expeditions in small groups of 10, supervised by two or three more advanced students. Each group is assigned a common objective, the achievement of which will require mutual knowledge and cooperation between its members. In a few days, the students thus acquire a collective spirit that they are supposed to keep and practice throughout their schooling .

This category of universities uses more than others the argument of values, generally anchored in the history of the establishment, its founders and its alumni, to differentiate themselves and define a singular identity in which candidates can recognize or to which they wish to adhere. This is the case at Harvard where, during the traditional “Community Conversations”, students can discuss elements of identity and sense of belonging with their peers and mentors.

Presented as a neutral time, intended to facilitate the installation, the meeting with peers and advisers, as well as the first reflections on the intellectual and personal project, the orientation program represents a real place of initiation to a state of spirit that has been transmitted from one class to another for more than a century.

Supported and advised by the students of the promotions above, the professors and the members of the staff, the newcomers are part of these integration and socialization processes which had already been identified and described by Michel Anteby in his socio -ethnography of Harvard Business School faculty . Through guidance, they begin to integrate tradition and above all the norms of good behavior – those that sociology calls “routines” – which will allow them to complete their studies in relative safety and thereby contribute to “building and sustaining the Harvard community ,” that is, to its prestige and reputation.

The issues of belonging to a community of values ​​have become stronger over time on American campuses due to the increased diversification of student recruitment. Each new first-year class is made up of students from a wide variety of geographical, linguistic and social origins. Universities’ recruitment policies combine many criteria, so as to ensure a certain degree of profile diversity, in accordance with their mission and statutes.

At the national level, thanks to various forms of positive discrimination, reaffirmed so far by the jurisprudence of the Supreme Court, but some of which are likely to be called into question in the years to come , ethnic, gender or ethnic minorities he other traditionally under-represented groups, such as veterans, top athletes, first-generation students and people with disabilities, occupy an increased place among the student population. These profiles, like students from “Community College”, face more challenges at university than others and require, especially at the beginning of their course, more attention.

At the international level, although the United States has a very long tradition of welcoming foreign students, until the 1990s incoming mobility was mainly achieved at the doctoral level or in continuing education. It was essentially a mobility financed by government grants or philanthropic foundations, falling within the context of the struggle for geopolitical influence in the post-war period and then the Cold War.

More recently, under the double effect of globalization and the Internet, it is younger candidates who, from any country, can apply to American universities from the undergraduate level. The United States is thus firmly placed at the top of the host country for foreign students seeking a degree course, all cycles combined.

Faced with this diversity of profiles, the time of integration becomes strategic for universities. We seek to encourage students to understand the rules, enable them to clearly identify interlocutors and services, converge expectations, and reduce to a minimum the need for specific support, which is far more costly.

Similarly, it is important to reduce as much as possible the risk of dissatisfaction, dropping out or even abandoning studies, potentially harmful for the image of the university but also and above all, for its economic consequences in the event of a request for repayment. Students pay tuition fees in the order of tens of thousands of dollars per year so they must be satisfied from their first days.

These elements partly explain the extremely friendly and inclusive nature of most orientation programs, which promise parties, treasure hunts, speed-dating to make friends, cooking classes and other fun activities. Some universities, such as Brown or Chicago, schedule times for and with families, who are considered part of the university community.

The organization of these activities is usually entrusted to the student life service, sometimes to a student association. At the University of Wisconsin-Madison, a specific service has been created, the “Center for the Freshman Experience”, responsible for facilitating the transition to higher education and ensuring success through the orientation and development program. other actions throughout the year.

The question of well-being

It is true that the Covid-19 pandemic has put a strain on the American model of higher education based on the “student experience”. The abrupt closure of campuses and the isolation of many students during periods of confinement has had a considerable impact on their mental health. Among the most vulnerable populations in terms of mental health during the pandemic are gender and sexual minorities but also Asian, black and mixed-race students who are victims of more frequent racist acts .

A study published in 2021 on the deteriorating state of the mental health of American students revealed the greatest fragility of those in first year, already under the stress of the transition to university, and deprived during the confinement of the possibility to forge solid friendships, human contacts and personalized support.

Concerns related to the mental health of students finally join, because of the pandemic, what Simon Marginson called in 2010 the right to security of international students, who are also potentially fragile and alone during the first months of outgoing mobility in a unfamiliar and unmarked environment.

Thus, in 2022 several universities have modified their student orientation and reception activities to better meet the social and psychological needs of new promotions. They have thus integrated discussion times on stress management, with small groups, less intimidating for young people coming out of confinement. At Columbia University, the words “reconnect, strengthen and rebuild as a community” are used for these post-Covid welcomes .

In a more structural way, if the universities deploy so many efforts in the direction of first-time entrants it is also because they seek to maintain their attractiveness, with international candidates in particular. This is for them, given their economic model, the major issue. The pandemic has severely limited student mobility globally with repercussions on the number of international applicants, which has decreased in the United States as in other countries.

While the drop in enrollment in 2020 was the largest since 1948 (-14.2% at the undergraduate level), the number of international students in the United States has been steadily declining since 2016 . This situation is worrying for several reasons, in particular the heavy dependence of American universities on Chinese and Indian candidates, who are particularly sensitive to recent developments in immigration policy ]. One in three international students in the United States comes from China and about one in five comes from India.

The decline is more marked in computer science and engineering sciences, which are strategic in terms of innovation and economic issues. According to a study carried out by the American think tank National Foundation for American Policy, a large proportion of Indian and Chinese students in these fields have been turning to Canada for several years, which does not impose the same visa restrictions on them.

Beyond orientation week and welcoming new entrants, what is at stake, of course, is the ability of American universities to attract international talent and retain the best American students, while perpetuating the economic model on which they are based.

In the context of national public finances, this model is therefore key to maintaining the competitiveness of the American economy as well as its ability to continue to produce innovation. And if data recently released by Japan’s Ministry of Science and Technology is to be believed , China has surpassed the United States for the first time this year in scientific research output and high-impact publications.

Author Bio: Alessia Lefebure is a Sociologist, member of the UMR Arènes (CNRS, EHESP) at the School of Advanced Studies in Public Health (EHESP)