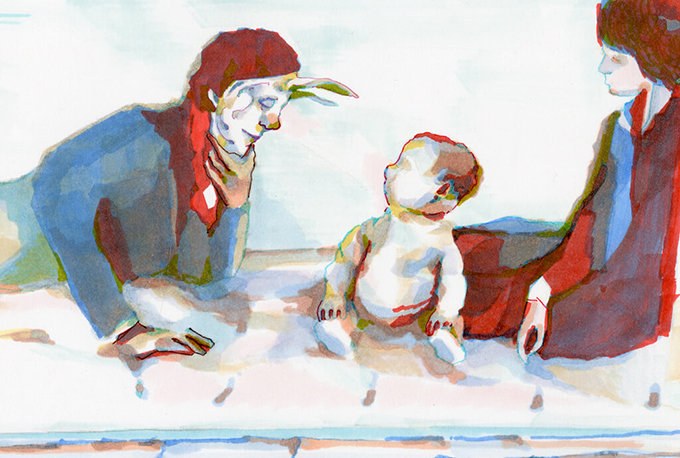 In 1920, psychologist John Watson described his infamous experiments on an infant in a bid to show that the human mind is a blank slate. A hundred years on, Antonio Melechi examines the rise and fall of behaviourism, and the utopian – or dystopian – reflexes that it conditione

“Give me a dozen infants…and my own specified world to bring them up in,” wrote John B. Watson in his 1925 book ​Behaviorism​, “and I’ll guarantee to take any one at random and train him to become any type of specialist I select – doctor, lawyer, artist, ​merchant-chief and, yes, even beggar-man and thief, ​regardless of his talents, penchants, tendencies, abilities, vocations, and race of his ancestors.”

When Watson summoned up this brave new world of vocational education, American psychology was beginning to cosy up to the new research foundations and glad-hand state bureaucrats. Having emerged as an adjunct to philosophy, the discipline had, in the eyes of Watson and other US practitioners, not done enough to retool itself as an experimental and applied science: a science that could not only revitalise the classroom, factory and hospital, but take on the church and the family when it came to questions of “how to live”.

Watson is regarded as the founder of the psychological school of behaviourism and was also a tireless promoter of the credo, quite prepared, by his own admission, to push “beyond my facts”. His message, transmitted via radio, public lectures and a vast outpouring of journalistic bombast, was as simple as it was combative. Don’t bother with William James, Henri Bergson and the armchair psychologists, he snarled. Ignore the Freudian soothsayers. Be done with talk of consciousness, sensation, attention, the inner self and inherited traits.

Behaviourism, as Watson had defined it a decade earlier, while chair of the psychology department at Johns Hopkins University, was the science of human activity and conduct, and its mission was to discover the “laws and principles whereby man’s actions can be ​controlled by organized society​”. But where, exactly, was the evidence for behaviourism’s view of the self as a tabula rasa? And what had two decades of research at the universities of Chicago and Johns Hopkins really demonstrated about the possibilities of environmental modification?

Born into a Carolina farming family and raised in the Baptist church, Watson (1878-1958) narrowly dodged a career as a clergyman before finding his way to the University of Chicago. Guided by the neurologist Henry Donaldson, his doctoral research sought to understand the complex behaviour of white rats. To this end, Watson designed a series of problem-box experiments with rats that became increasingly adept at searching out food. He concluded that learning occurs by “a gradual selection of certain acts and movements in ​the given situation​ by reason of the satisfaction they bring”.

By the time Watson published his landmark paper “Psychology as the behaviorist views it” in 1913, he had transferred to Johns Hopkins, extending his research on problem-solving with rats, while overseeing laboratory and naturalistic investigations of learning in monkeys, terns and pigeons. These wide-ranging studies were filled with interesting ethological particularities, but a kind of elective blindness, a grasping for the grand principle, was about to overtake him. For all his insistence on “empirical data obtained through careful and controlled observation”, Watson had already stepped well beyond his remit. To proclaim that there was “no dividing line between man and brute”, even as a methodological premise, was a daring provocation. To assert the role of environmental conditioning without acknowledging the importance of imitation and social learning, to reduce thinking to the ghost of “subliminal speech”, was a confession of faith.

Watson’s first textbook, ​Psychology from the Standpoint of a Behaviorist (1919), redoubled this commitment to reducing complex behaviour to the most simple and observable of rules. Yet the experimental and evidential hole at the heart of behaviourism was plain to see. Apart from some short-lived experiments on the conditioning of the motor reflex, behavioural psychology had no human data to draw upon. The notion that it could furnish laws of control and training that were general and comprehensive, able to adapt to shifting social standards, was impossibly far-fetched.

“In spite of its shortcomings the book had a tremendous effect,” recalled the Harvard psychologist and neo-behaviourist B. F. Skinner (1904-90), whose work on operant conditioning went on to abandon Watson’s “false scent” for a focus on learning through reward. “The new movement immediately attracted attention and adherents…In the controversy which followed, Watson’s taste for, and skill in, polemics led him to extreme positions which he would never escape.” And throughout these broadsides, Watson, probably the country’s most famous psychologist, was keen to tell isolationist America that behaviourism was a “native production”, a utilitarian endeavour free from elaborate, European-style abstractions.

As his thinking developed, the conditioned reflex – a concept taken from work separately undertaken by Ivan Pavlov and Vladimir Beckterev – became the dynamo of habit and learning in Watson’s work. In 1918, upon returning from military service, he coordinated a research project at Johns Hopkins’ Phipps Clinic that set out to record the occurrence of reflexes and instinctive tendencies in infants from birth onwards. On the basis of these findings, Watson speculated that there were only three emotional reaction patterns – fear, rage and love – each of which was recognisable (to Watson) by telltale behavioural indicators such as stiffening of the body, recoiling, catching of breath, crying, cooing or smiling. Every child was a blank slate, a laboratory for establishing “conditioned emotional responses”. The only innate or unconditioned fear stimuli were, in Watson’s view, loss of physical support (being dropped) and loud noises.

To provide experimental evidence of a conditioned fear, he and his graduate student Rosalie Rayner undertook a series of experiments that were destined to become among the most infamous in the history of modern psychology. The subject was “Little Albert”, the nine-month-old child of a hospital nurse. Weighing 21 pounds and “on the whole stolid and unemotional”, Albert was, apparently, selected because his temperament would ensure that little harm would arise from the tests Watson had in mind. These initially involved a series of stimuli being placed in his crib, including a white rat, a dog, various masks and a burning newspaper. “At no time did this infant ever show fear in any situation,” Watson and Rayner reported. “The infant practically never cried.”

At 11 months of age, Albert was again presented with the rat, but just as he went to touch the animal a steel bar was struck with a hammer behind his head, causing him to withdraw and whimper. This was repeated on five separate occasions, after which Albert began to cry when presented with the rat, minus ear-splitting clang. The same conditioned response was elicited in slightly weaker form when he was presented with other furry stimuli, and these reactions persisted after a month’s lapse in experimentation. Calling the experiment as “convincing a case of a completely conditioned fear response as could have been theoretically pictured”, Watson and Rayner’s 1920 paper “Conditioned emotional reactions” signed off with some characteristically wayward bluster, namely that “emotional disturbances in adults” could be “traced back to…conditioned and transferred responses set up in infancy and early youth”.

In the weeks after the paper’s publication, Watson’s personal and professional life began to unravel. As his affair with Rayner became public knowledge, he was made to resign from his post at Johns Hopkins. Divorcing his wife, he married Rayner and took up a lucrative position as vice president of the J. Walter Thompson advertising agency, directing the accounts of Johnson’s Baby Powder and Pond’s Extract. Claiming to find it “just as thrilling to watch the sales curve of a new product as to watch the learning curve of animals or men”, he succeeded in combining his business and academic interests and, with funding from the Rockefeller Foundation, commenced research at Columbia University on procedures that parents and teachers might use to control the behaviour of children and alter their personalities.

The upshot of this work was Psychological Care of the Infant and Child​, co-authored with Rayner. Offering a series of scattershot injunctions against excessive coddling (as likely to lead to invalidism), shouting and scolding, this parenting guide advocated a regime of accelerated learning, recommending the “beautifully effective” punishment of pencil-rapping of the child’s finger whenever any undesirable act took place. The book was widely reviewed and sold well, but its Gradgrindian lessons in loveless parenting did not make it to a second edition.

Most histories of behaviourism suggest that the nursery science remained influential through the 1930s and 1940s, paving the way for the work of Skinner and other neo-behaviourists before being swept aside by the cognitive revolution. Although this is broadly true, significant allies of the behaviourist cause had begun to fall away much earlier. Adolf Meyer, who had encouraged and facilitated Watson’s work on child psychology at Columbia, feared that his myopic outlook and lack of judgement had already become a danger to the development of psychology. The philosopher Bertrand Russell, a friend and early champion of Watson, sensed an even greater danger ahead: that the technocratic elite’s use of behaviourism would create a social division between “thinkers” and “feelers”. By the early 1930s, the lay press had also become more critical of behaviourism, asking what practical benefits the science had gifted American society over the last two decades. Writing in The ​Atlantic Monthly in 1934, one commentator accused Watson’s psychology of having duped the public: “It has renamed our emotions ‘complexes’ and our habits ‘conditioned reflexes’, but it has not changed our habits nor rid us of our emotions.”

Behavioural science was an unfulfilled prophecy. Although Watson’s legacy can be traced through the work of B. F. Skinner, Clark Hull and Edward Tolman, today’s psychology textbooks invariably cite the Little Albert experiment as a cautionary tale about the twin dangers of scientism and experimentation without proper ethical controls. Partly because of the dark shadow that lingers over the experiment, it’s easy to forget that behaviourism had once sought to promote a forward-thinking vision of social harmony, and that Watson’s extreme environmentalism was (along with Franz Boas’ cultural anthropology) an ideological bulwark against the eugenics movement.

Whatever its ethical or methodological shortcomings, the Little Albert experiment ultimately belongs to a feverish and embattled moment in the history of science: a time when technocrats dreamed up wild and improbable utopias, when psychologists volunteered to become mechanics in human engineering, and when so-called experts in childcare dared to wonder whether it was really a good idea for Little Albert and his peers to live with, or even know, their own parents. Watson’s misadventure reminds us not only of the dangers of scientific overreach, but raises questions about whether modern psychology still owes as much to the armchair as to the laboratory.

Author Bio: Antonio Melechi is a research fellow in the department of sociology at the University of York.