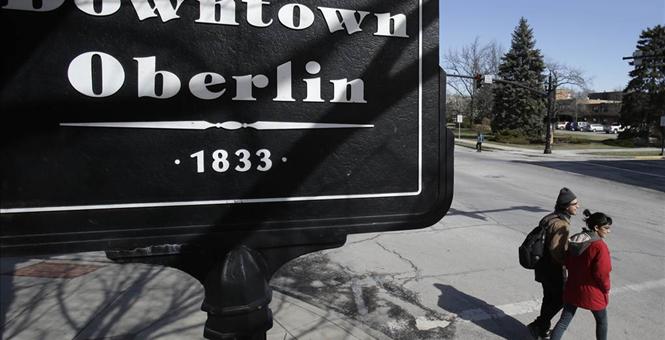 A few posts back, I praised Oberlin College for standing up to black student demands to be automatically passed in all their courses. Other institutions were given similar demands, and caved, but Oberlin had a spine.

So many times I’ve seen lone faculty with integrity, the very few with spines, stand up for integrity, only to be destroyed, and now I could very well see the parallel in higher education.

I honestly thought administration at Oberlin, by being adults and telling students “we’re here to help you get an education, not to rubber stamp whatever you want to call effort” would honestly put an end to the silliness, that students upon (finally) having higher education administration act with integrity, would get back to work.

I struggled with a title for this essay, as nothing really captures the student response to admin not treating them like pampered customers and telling the students to take responsibility for their own actions. Instead of heading towards adulthood, the students doubled down on their foolish behavior.

The students submitted a massive list of demands. While the list of demands (at this time) has nigh 90,000 views, I don’t encourage the gentle reader to click and read. Allow, instead, for me to highlight and discuss the implications of this list.

As you will see these are not polite requests, but concrete and unmalleable demands.

As much as I grieve for what’s happening in higher education, I take some small pleasure in the students’ lack of respect for administrators. Time and again I’ve seen administration treat faculty in deeply non-collegial, disrespectful ways, and faculty could do nothing about it but lower eyes and back away meekly. The students are starting to pick up on this, and, honest, children do learn by example, and see no reason to treat with respect an administration that doesn’t treat others with respect.

We DEMAND a 4% annual increase in Black student enrollment from EACH of the Americas, the Caribbean and continent of Africa starting in 2016 to accumulate to a 40% increase by 2022.

And again we’re seeing what goes around comes around. Admin has totally supported race/gender politics at campuses throughout the country, and the students have noticed: actual accomplishment is irrelevant, advancement is now about race and gender. Curiously, it looks like the students are a little off on their compound interest calculation (assuming that’s what they’re doing here), as 4% increase compounded over 7 years is only a 36% increase.

Whatever, the point is still: the students are asking to adjust the population based not on content of academic character, but strictly by skin color. The student had to specify “Black” because otherwise Oberlin could admit many Afrikaners, and those are quite white, albeit from Africa.

We DEMAND the creation of a department that focuses on languages of the Africana peoples to include a minimum of one language each from the African continent, Caribbean, and the Americas:

—one of the more ridiculous demands, and that’s a high bar. I’m not denigrating these languages, mind you, but the feasibility of finding a specialist in Jamaican Patois, for example, much less filling classes on that “language” on a regular basis, is simply nonexistent.

The document also demands that many key administrative positions be held by Black administrators. I wonder if they’ll accept people that simply self-identify as black? I hear that’s sufficient to advance far in the NAACP…at least until they find out you’re genetically white, regardless of self-identification (note: the document doesn’t make it clear if “Black” and “black” are necessarily the same thing). Why is self-identifying a gender regardless of genetics acceptable to the point of being “heroic,” but not race? I guess that’s a question for a different blog.

There are similar demands that students should influence who becomes music faculty…I know, it’s a cliché, but I’m not sure young people should get to immediately determine validity of music, at an academic level. Let the young people study and learn and demonstrate that they understand…oh wait, that’s the successful way higher education was run before the administrative takeover where most everything academic is now decided more by whimsy and identity politics than by tradition and common sense.

Again, it really seems like the students have a surprisingly subtle understanding of what’s happened to education.

Hmm, I should mention that part of me wonders if this is a hoax. If it is, it’s a darn good one, and I sure don’t see students at Oberlin disavowing this document. Some have picked apart a few grammatical errors, but this is a 15 page document, obviously hastily prepared…a few errors mean nothing.

We DEMAND an online database that outlines the deadline, dates, and forms critical for the successful academic journey of Black students.

While many demands are outright ridiculous, why doesn’t such a database already exist? So many of my students have been forced to stay on campus a year or more longer than they needed to, not because of any lack of talent, but because the exact forms and such that needed to be completed were never explained to them.

For the readers new to my blog, allow me to quickly explain why administration has no problem opening up $100,000 administrative positions and granting themselves huge pay raises, but haven’t spent the few thousand dollars necessary to provide a nice online walkthrough on how to graduate, at Oberlin and at many other campuses: administration is focused entirely on growth, and many administrators receive bonuses the more students they trap on campus.

If this isn’t a hoax, I bet these students are getting some good advice from someone on the inside, because very few students understand how the “retention is everything” game is played.

Who could the insider be?

We DEMAND the allocation of resources geared towards shifting the institutional climate so that Black faculty, administration and staff can thrive and not have to engage in the invisible labor that we know is an important part of their work.

This reference to “invisible labor” really points to the insider being a faculty member. Most people think that faculty primarily stand in front of a class for 2 hours a week, and then go home, but there really is much more (often unpaid) labor in a faculty job than that…I’ve avoided such discussion because, hey, bigger fish to fry. But I doubt 1 student in 100 thinks faculty do much more than teach, when the reality is teaching duties constitute a minority of responsibility for many faculty.

The students specifically list faculty that should be granted tenure immediately, or put on the tenure track…if I was being extremely suspicious, I’d look carefully at the names on that list to identify the insider. I also note that no particular student name is attached to this list of demands…again, faculty know full well what happens when administration knows your name and, well, it’s not good.

The demands go on interminably. There’s even a list of specific administrators to fire, including the Vice President of Strategic Initiatives, Director of Student Health and Counseling Services, Accounts Payable Supervisor, among others. Considering Oberlin has under 3,000 students and yet still merits people with such titles, the gentle should use these titles to understand how incredibly bloated our administrative caste is at this and other institutions.

Ok, it’s time for administration to prove their previous actions were not simply a fluke, and that they understand how integrity works. Even though some of these demands are quite reasonable, so many are ridiculous to the point of laughable extortion, that this is the only proper response the President should give:

“Obviously, we at Oberlin have failed, and failed completely in our mission of education. Continuing to function as a school would not be acting with integrity, and so we are closing down immediately, as our final act to help our students.”

Of course, that’s not the response administration gave. Instead, they’re going to have a meeting in early January.

Maybe then they’ll announce they’re closing down the school? I don’t recommend the gentle reader hold his breath. To judge by the administrative response so far, no breath-holding at all, please:

“All the items on the list to me show a really admirable degree of sincere thinking in the part of students as to what to change to make a difference, to really improve campus climate,” Linzer said.

So it’s nigh Christmas, and I find myself playing the role of Grinch. I’m taking back the praise I gave to Oberlin earlier…and will hold it until I know exactly how Oberlin will respond to these often hysterical demands.

I strongly suspect the student demands will be mostly met. Suppose they are. Knowing that a degree from Oberlin will merely assert one’s skin color is black, does the gentle reader suppose such a degree will be worth anything at all?