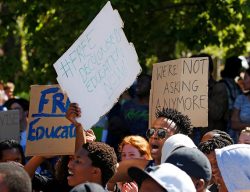 South Africa’s just-ousted Minister of Finance committed another R57 billion to higher education and training over the next three years. In his first (and last – he was removed from the portfolio less than a week later) budget speech, Malusi Gigaba followed through on former president Jacob Zuma’s controversial promise in December last year of fee-free higher education.

The minister’s announcement is likely to be well-received by those who have supported the demand by relatively small student groups that “Fees Must Fall”. Yet there is a major fault that is ignored by those who favour free higher education. It fails to provide a justification for increased allocation of resources to higher education on the grounds of equity or social justice.

There are persuasive arguments that free higher education will be unambiguously regressive. This is because it involves a transfer of resources from lower to higher income individuals within a national population.

This has been evident in certain other African and South American countries, as well as in Western Europe. Some countries do offer free tertiary education. Germany and Norway are current examples. But, first, they are rich in per capita income terms. And, second, “free” is ambiguous because it covers only selected components and not the full cost of this level of education.

From a social justice perspective

To understand the social justice dimensions of the question requires that attention be paid to the end of the process of higher education, the outcome, not the beginning when the focus is on costs and who bears them.

The bulk of graduates in every higher education system enter the labour force’s upper echelons. This places graduates well up in the top 10% to 15% brackets of the national distribution of earned income.

Most significant from a social justice perspective, university graduates receive considerably more income than the median taxpayer, or those within the median tax bracket, who inhabit the middle of the array of taxable income levels in every country.

This observation applies to direct taxation: personal income tax, company or corporate tax, wealth taxes and estate duty levied on individuals or corporate entities. But the regressive nature of the income transfer to university graduates is even more striking when attention is directed to indirect taxation. Examples include VAT, fuel levies, import and excise duties and a large set of user charges.

Indirect taxes are not levied directly on liable persons or their income generating entities like companies and corporations. Yet ultimately such taxes are paid by all consumers, irrespective of their levels of income, because they are paid by entities who are not individual consumers. This makes them regressive: everyone in South Africa will pay 15% VAT and a higher fuel levy from now on, in line with the 2018 budget speech.

One example widely cited is Australia where free higher education was decisively rejected in recent times. When a student loan scheme was under debate there about 20 years ago, the opponents of free higher education coined the slogan: Why should bus drivers pay for the education of lawyers? Why indeed? Today Australia possesses one of the world’s most successful national student loan schemes.

In the real world of course, there are individual students who fall through the net and do not graduate. They miss out on becoming high-earning members of a national labour force. Consequently, a number of once enrolled students end up burdened by debt obtained while studying, either from private sector sources like banks or from the state under a tertiary education loan system.

But these individuals, together with entering higher education students from poor households who are eligible for subsidy from state sources in many countries, must be treated as personal cases. They are judged legitimate or not legitimate candidates for free higher education provided by government.

Each individual case has to be decided on its own merits. But when viewed as a group, usually small in number compared to total enrolment, they certainly do not constitute a justification for free higher education throughout a given national system.

Another issue that should be a serious concern is that fiscal authorities in a country short of revenue simply cut the allocation to post-school education – universities and technical and vocational colleges. This has been the case for many years in South Africa, and happens because universities and post-school colleges are not an important constituency in the competition for resources.

This has led to chronic underfunding, a fact which has not been recognised by “Fees Must Fall” and free education activists. This is highly likely to continue as a major problem in the future if higher education is held to be nominally “free” in publicly stated policy.

If there are circumstances specific to South African higher education which might justify a claim for more resources to be devoted to post-school education, then these circumstances must be explained upfront and in detail. Thus far no “Free Education Planning Groups” at universities appear to have done so.

Every university has a responsibility to clarify the values by which it functions. This is a responsibility to all its members, as well as to the concerned public outside. The neglect of social justice in South Africa’s ongoing free higher education debate is highly surprising. It is also undermining of the values that must be explicit in the public sector allocation of resources.

Author Bios: Sean Archer is a Research Associate, School of Economics at the University of Cape Town