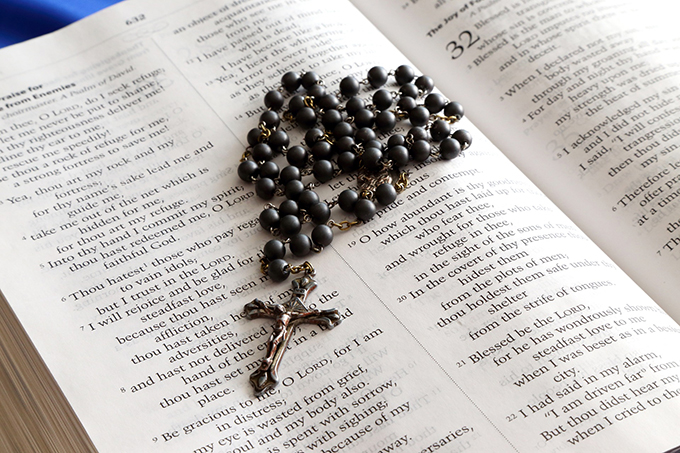 As schools become converged, taken over by this bizarre hate ideology, they remove everyone who doesn’t agree to it. They’ve already locked down the faculty on campus, but that was easy to do: faculty are only too happy to write and talk about their beliefs…those who didn’t virtue signal with sufficient sycophancy were easily identified and removed, or not allowed on campus in the first place. Thus we now quite commonly have departments which are pure in their ideology.

How to purify the students? Well, you start with mandatory indoctrination courses, sacrificing academics in exchange for credit hours in Women’s Studies, Race Studies, and Sexual Orientation courses. This captures the souls of many students…but how to know who still aren’t drinking the Kool-Aid?

Targeting student groups is the answer. So, anti-communist groups get targeted, while Satanists get a free pass…but one group is standing up this lunacy:

Iowa Christian club refuses to back down: ‘We have not caved to the university’s wishes’

It’s hard to believe even flyover states are finding their institutions converged but it’s hard to argue with the facts. What problem, pray tell, did the Iowan University find with the Christian club?

…fail to comply with its new “human rights” policy.

The “human rights” policy is more about sexuality, specifically homosexuality, which is something of a no-no for Christians (not that there’s anything wrong with that). To clarify, the Christian club wants its officers to adhere to Christian beliefs. Seriously, this is a problem for the university:

“deregistering any and all student clubs that has not signed its policy that requires the groups to open their membership — and leadership positions — to anyone, regardless of race, religion, national origin, sexual orientation or gender identity.”

The rule here is pretty ridiculous, as it basically means that even a Satanist can join the Christian youth group, even serve as leader (I’m dangerously close to making a comment about The Pope here…). As written, pretty much any group with any restrictions on its members could be targeted.

Is the university targeting other groups?

…campus leaders let other groups, such as Muslim ones, limit membership and leadership opportunities, while it cracked down on the faith-based group Business Leaders in Christ, or BLinC, which sought to bar openly gay students from leading the club.

If it weren’t for hatred and violence, hypocrisy would be one of the two biggest issues for this converging ideology. The Muslim groups require believers (of course), and certainly are against active homosexuals…but that’s ok. It’s only an issue for Christian groups. Toss in how this ideology commonly targets white males, and locks them out of jobs…and it’s tough to understand how anyone can follow it at all.

Now, other (less religious) groups were hit with this policy, and caved in. But, those Christians have always been unwilling to yield to those claiming godlike power on Earth, and just won’t change their ways to suit the “leaders” ruling the school.

Noting that the enforcement of the rules was selective (as it always is for people at the top), and knowing that there’s no hope for fair treatment on campus, the Christians took their case to off campus court, who managed to rule against the school:

Now a federal judge has ordered the taxpayer-funded institution to treat Business Leaders in Christ the same as it treats a registered Muslim student club.

U.S. District Judge Stephanie Rose told the university Tuesday to immediately reinstate BLC so it could participate in a “spring recruitment fair” Wednesday that it deemed essential for its continued viability on campus.

I’ll never understand why the SJW ideology hates Christianity for its views on gender and sexuality, but gives Islam a free pass, even though the latter holds views which are similar (and in many cases far more restrictive towards females). It’s weird how neither mainstream media nor alternatives can provide some explanation, although at least (and solely) the alternatives point out the very clear hypocrisy here.

Despite the humiliating defeat and exposure of their hypocrisy, the University of Iowa, more accurately the SJWs running the place, can’t just leave well enough alone. I do feel the need the need to point out that a university’s mission is education and research. Since the “leaders” have forgotten this, I provide a copy of the University of Iowa’s mission statement here:

In pursuing its missions of teaching, research, and service, the University seeks to advance scholarly and creative endeavor through leading-edge research and artistic production; to use this research and creativity to enhance undergraduate, graduate, and professional education, health care, and other services provided to the people of Iowa, the nation, and the world; and to educate students for success and personal fulfillment in a diverse world.

The University of Iowa carries out its academic mission primarily through its 11 colleges, which offer undergraduate and graduate education, professional education, and education and training in the health sciences.

I openly defy anyone to read the above and conclude the university needs to spend millions of dollars to make sure open homosexuals can be leaders of Christian clubs (but not Muslim clubs).

I’ll just focus on the first few words of the above. “Teaching” refers to education of humans, and it’s not an accident that this is the first part of the mission. “Research” refers to education of humanity, by expanding the knowledge humanity possesses. Again, not an accident that this is part of the mission.

The last, the very last goal of the mission is service, bringing good works to the community which has provided the funds which allowed for the creation of the university.

Will it really take three guesses as to what are the religious beliefs of the community providing the funds? The community should take in interest in the leaders of the institutions.

The leaders took the money, gave themselves huge salaries, luxurious retirements…and then used whatever money left over to violate and abuse those beliefs to the best of their abilities.

There needs to be a real investigation as to who these leaders are and how they came into power. More importantly, of course: we need to get rid of these guys, although, as always, in the interim we should de-fund this system by eliminating the student loan scam.