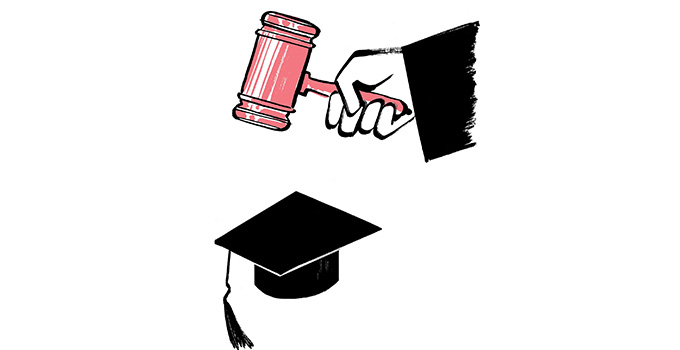 The U.S. military learned a valuable lesson about race during the Vietnam War: Diversity does not happen without affirmative action.

That helps explain why a distinguished group of 35 military officials wrote a brief to the Supreme Court supporting the use of race as a part of college admissions – as the U.S. military has done at its four service academies over the last nearly 50 years.

While the Supreme Court has agreed in the past that racial diversity on college campuses is an important goal, the problem is just how to achieve that goal without using race as a factor.

In two cases that are expected to determine the fate of affirmative action programs across the country, the court heard oral arguments on Oct. 31, 2022, that could bring an end to using race as one of many factors in college admissions decisions.

Questions from the justices reflected the ideological divisions on the court. Conservative justices argued that race-based admissions policies had no defined end point.

“I don’t see how you can say that the program will ever end,” Chief Justice John Roberts said.

Associate Justice Clarence Thomas cut right to the point in his questions.

“I may be tone-deaf when it comes to all these other things that happen on campus, about feeling good and all that,” Thomas said to one of the attorneys defending affirmative action. “I’m really interested in a simple thing: What benefits academically are there to your definition or the diversity that you’re asserting.”

In sharp contrast, liberal Justice Sonia Sotomayor reminded the court that diversity was deemed an issue of national importance in previous rulings and that without such programs, the number of historically disadvantaged applicants decreases substantially.

“What we know,” Sotomayor said about the nine states who have tried dropping affirmative action programs, “in each of them, white admissions have either remained the same or increased. And clearly, in some institutions, the numbers for underrepresented groups has fallen dramatically, correct?”

The US military experience

In my view as a scholar of the history of affirmative action, the military officers make the case that diversity is a matter of life and death.

The officers argued in their brief that barring universities from taking race into account in admissions risks sowing “internal resentment, discord, and violence” in an era when “diversity is imperative to our military’s dealings with international allies and complex global challenges.”

In addition, the military leaders argued that overturning affirmative action would damage the extremely successful talent pipeline that the officer corps has set up directly through military academies and indirectly through the university-based ROTC programs.

This is not the first time former military officials have weighed in on affirmative action. They did so in the 2003 case against the affirmative action program at the University of Michigan in Grutter vs. Bollinger.

“The importance of maintaining a diverse, highly qualified officer corps has been beyond legitimate dispute for decades,” the military officials wrote.

Indeed, in 1962, when U.S. involvement was starting to grow in Vietnam, Black commissioned officers represented only 1.6% of the officers corps. Military academies remained virtually segregated, with Black people making up less than 1% of enrollees. As a result, the number of Black officers didn’t grow much.

Over the next five years, the number of Black soldiers fighting and dying on the front lines grew to about 25%. Racial tensions between white and Black soldiers led to at least 300 fights in a two-year-period that resulted in 71 deaths.

Fueling those fights was the belief among Black soldiers that the largely white officers didn’t care about their lives.

The lack of diversity, the military leaders wrote in their brief, “led to a complete breakdown in understanding between minority enlisted service members and the white officers who led them.”

In what they described as “a painful chapter,” military officials said the Vietnam War “brought home the importance of cultivating diversity across all levels of leadership.”

It also began the military’s use of affirmative action, including race-conscious admissions policies at service academies and in ROTC programs.

In their lawsuits now in the Supreme Court against Harvard and the University of North Carolina, the anti-affirmative action organization Students for Fair Admissions argued that the schools’ race-conscious admissions process was unconstitutional and discriminated against high-achieving Asian American students in favor of traditionally underrepresented Blacks and Hispanics.

These cases mark the second time the Students for Fair Admissions and its founder, Edward Blum, a conservative activist who has raised millions of dollars from right-wing donors, have reached the Supreme Court in their efforts to dismantle affirmative action.

In 2016, they challenged the University of Texas on behalf of white and Asian students, but lost. That didn’t stop Blum from filing the latest challenges before the Supreme Court – all in the effort to eliminate the use of race in college admissions.

In an October 2022 interview, Blum said he believes that diversity on campus is a good thing, but “there is a way to go about doing this without putting a thumb on the scale.”

Given the conservative 6-3 majority on the Supreme Court and its controversial ruling that overturned the landmark 1973 abortion decision in Roe v. Wade, it does not appear likely that affirmative action as it’s known will survive, despite decades of rulings that protected the use of race as an admissions criteria.

Forms of that argument have been around since the 1970s, when a legal challenge reached the Supreme Court in Regents of the University of California v. Bakke.

In that 1978 case, Allan Bakke, a white man, had been denied admission to University of California at Davis’ medical school. Though ruling that a separate admissions process for minority medical students was unconstitutional, Associate Justice Lewis Powell wrote that race can still be one of several factors in the admissions process.

Since then, the Supreme Court has issued different rulings on whether race could be used in college admissions.

In the 2003 Grutter v. Bollinger case, Justice Sandra Day O’Connor wrote the majority opinion that endorsed the University of Michigan’s “highly individualized, holistic review” that included race as a factor and had been legally challenged.

Most recently, in Fisher v. University of Texas at Austin in 2016, the court reaffirmed its belief in schools that “train students to appreciate diverse viewpoints, to see one another as more than mere stereotypes, and to develop the capacity to live and work together as equal members of a common community.”

If not race, then what?

In the cases before the Supreme Court, the University of California also filed a brief urging the Court to allow the use of race. The school argued that the elimination of its affirmative action program in 1996 has caused its diversity numbers to decline in some cases by more than 50%.

“UC’s experience demonstrates that the race-neutral methods which it has diligently pursued for 25 years have been inadequate to meaningfully increase student-body diversity,” the school said in its brief.

The impact on the number of Black and Latino students was virtually immediate. At UCLA, for instance, African American students made up 7.13% of the freshman class in 1995, and only 3.43% in 1998.

“UC’s decades-long experience with race-neutral approaches demonstrates that highly competitive universities may not be able to achieve the benefits of student body diversity through race-neutral measures alone,” the UC brief stated.

Author Bio:Travis Knoll is an Adjunct Professor of History, at the University of North Carolina – Charlotte