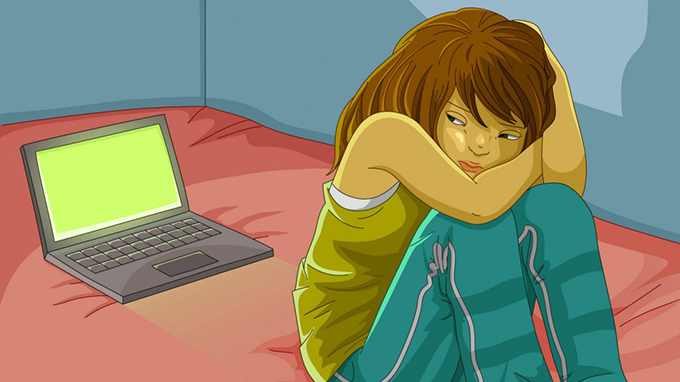 Cyberbullying is very different to traditional bullying. Relationships between victims and perpetrators do not need to be physically close, they don’t need to be in the same class or even in the same school, for example. It can easily be anonymous, which may lower inhibitions to behave in a mean or hurtful way. It doesn’t stop once someone is at home, and isn’t limited by time of day or night. And the potential exposure and embarrassment of the victim is on a much larger scale.

There may be no respite or sanctuary for a victim of cyberbullying. Messages can be sent and received via mobiles in secret or through anonymous apps, with no one to step in and stop it.

Being bullied is associated with self-harm and suicidal behaviours, as well as mental health problems such as anxiety and depression. But what about cyberbullying? The stakes are high with greater exposure to peers and it can be persistent, so it’s possible the impact could be more serious, too?

For our latest research, we systematically gathered all the studies on cyberbullying since the mid-1990s, to explore the association between it and self-harm and suicidal behaviours. We looked at information from more than 150,000 children and young people, from 30 different countries.

We also found a link between being a cybervictim and a cyberbully, with at least one in 20 young people involved in both. It seems that all young people involved in cyberbullying, whether as victims or bullies, are vulnerable to self-harm and suicidal behaviours. This duality was found to put male cyberbullies and/or victims, in particular, at higher risk of depression and suicidal behaviors.

Evidently, we need new, more effective ways to try to stop cyberbullying once and for all. There are many impressive initiatives trying to deal with thistype of bullying. But it is becoming increasingly difficult for adults to keep up with this rapidly changing environment, so we really need to look to young people for help stopping it.

Our findings also make clear that anti-bullying programmes and protocols should address the needs of both victims and perpetrators in a more balanced way. We found that students who were cyber-victimised were less likely to report the bullying and seek help than those victimised in more traditional ways. So school and college staff need to do more to encourage them to seek help, as well as be trained to recognise the signs.

This behaviour should also be seen as an opportunity to support vulnerable young cyberbullies, rather than simply discipline them. These associated risks cannot be ignored, and punishment does not help young people address them. School exclusion or time away from the classroom (a common response from teachers to deal with cyberbullying) might contribute to an individual’s sense of isolation and lead to feelings of hopelessness – also often associated with suicidal behaviours in adolescents.

There is no doubt that cyberbullying needs to be considered by policy makers who deliver bullying prevention and safe internet use programmes, too. While schools do run awareness activities, national bodies should also start providing online support and advice for victims and perpetrators. It’s important that young people are told how to intervene as a bystander as well.

Families and communities can also do more. Though it can be hard for adults to keep up with the latest platforms or online celebrities, it is important to discuss online activity with young people from an early age. Just as in real life social situations, children need to learn how to behave on the internet. It can be as simple as talking about how to behave online, how seemingly funny comments can impact on another person, and issues of consent when sharing videos and information.

Dealing with any form of bullying is not easy, but it can make all the difference to an isolated person. It can be difficult to have sympathy for a bully, but if we can all keep in mind that victims and bullies are sometimes one and the same – they are all vulnerable children and young people – we can start to give them the support they really need.

Author Bio: Ann John is a Clinical Professor of Public Health and Psychiatry at Swansea University