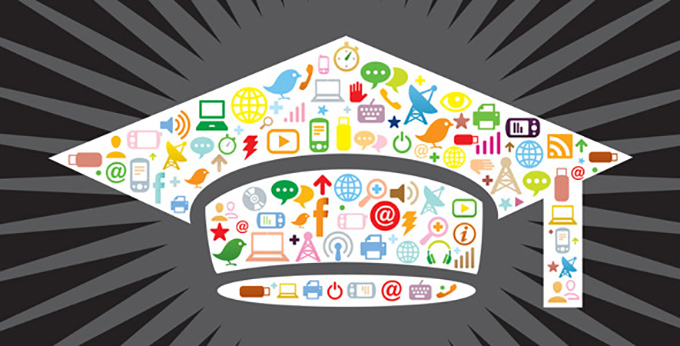 Universities fail to exploit social media’s most compelling features, tending to broadcast their brands instead of engaging students and the public online, new research suggests.

Visualise this: smiling students and successful faculty. In the background, beautiful buildings framed by blue skies.

These are the ways that Canadian universities choose to represent themselves on social media. This picture is somewhat accurate, but a tad misleading.

Twitter use by universities raises many questions for us as educators and researchers with an interest in social media. In our research, we have looked closely at exactly what universities are posting on Twitter, asking two important questions: What messages are universities conveying through their official Twitter accounts? How is university life depicted in their tweets? We examined over nine months’ worth of tweets from public universities in Canada, paying particular attention to the images and videos shared as well as the text accompanying them.

What we found was troubling. Based on the information shared from these official university accounts, one would likely conclude life in Canadian universities is universally gratifying, enjoyable and beautiful.

Students in images were nearly always smiling and happy. Faculty members — almost all middle-age white males — were shown giving speeches or conducting research. Campuses were always portrayed as attractive and sunny, boasting shiny buildings and new facilities. References to graduation ceremonies, groundbreaking research and sporting victories were all too common.

Teaching and learning received much less attention. This is not just a Canadian representation. We replicated our research using the Twitter feeds of more than 2,000 U.S. universities. The results were similar.

Institutional Twitter accounts seem to highlight and market an institutional brand — a positive ideal that they would like the public and potential students to hold. It’s understandable that universities, like individuals, want to present their ‘best self’ on social media. This makes sense from a marketing perspective.

This carefully crafted and tightly controlled representation gives an incomplete and unrealistic portrayal of the people and activities of the university. There is little suggestion in this portrayal of the struggles students face in their studies, health and well-being, finances, and so forth. There is little mention of the day-to-day effort, difficulty and struggles of teaching and learning.

We are compelled to ask: What is it that drives universities to use social media as they do? In what ways have social, economic and political forces (such as the reduction in public funding and greater emphasis on competition) led universities to use these powerful social technologies in the service of branding and marketing?

We want to encourage Canadian universities to use Twitter, and other social media, in different ways — ways that would improve Canadian society.

Social media provide an opportunity not just to broadcast a message to the public, but to foster two-way engagement and communication between stakeholders. Universities could make more meaningful contributions to our broader society by using social media to summarise research findings for public use, connect alumni with students and provide educational opportunities to those outside the institution.

Author Bios: George Veletsianos is a Professor and Canada Research Chair and Ashley Shaw is a Researcher and Ph.D candidate at Royal Roads University