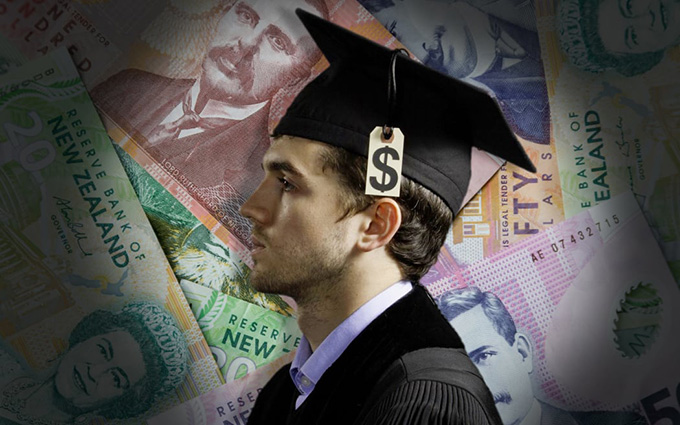 Over the past decade, there has been a growing debate about the value of student loans and the long-term impact of debt for those entering the workforce – particularly for students who struggled to complete their studies.

In the United States, where the average student loan is US$30,000 per borrower, the Biden administration recently announced plans to cancel US$32 billion worth of loans. This move has been blocked indefinitely by the courts but it has put the spotlight squarely on student debt both in the US and elsewhere.

In New Zealand, some 70% of all students borrow from the government to study. The collective student debt is NZ$16 billion, with the average debt per borrower sitting at around $24,000.

As students rack up ever-increasing levels of debt, the question has been raised about whether low-performing students should have their loan access cut off

Considering the debate around borrowing for study and calls for the debt to be wiped, my colleague and I investigated the effects of access to student loans on university re-enrolment, graduation and earnings for academically struggling students.

Despite concerns around using student loans for study, funding higher education through government-funded loans can have advantages. At their most fundamental level, student loans reduce the cost of the tertiary education system on the broader tax base, striking a balance between public investment and individual responsibility.

Student loans give students more choice as to where to study and thus can enhance competition across education institutions. Loans also offer an incentive for students to put more effort into study as they share some of the education cost.

While most students who complete their qualifications will increase their earning potential and be able to pay off their debt, there is a concern for low-performing students who may accumulate a large amount of debt but fail to graduate.

Student loans account for nearly half of government expenditure on tertiary education. Students borrow roughly $10,000 for one year of full-time study, costing the government about 45 cents on the dollar. The introduction of free tuition for the first year has reduced the total amount borrowed by students but hasn’t changed the average borrowing per year – partly because the government allows students to borrow more in living and course-related costs.

Considering the significant cost to both students and taxpayers, many experts advocate restricting loan access based on student performance and expected future earnings to reduce the risk for borrowers. But is this really the best option?

The linked administrative records from the New Zealand Integrated Data Infrastructure (IDI) allow us to follow students for up to nine years, from the start of university into the labour market.

We began our analysis looking at the data from all students starting university in 2008-2011. Our main analysis focused in on a small subset of students whose grades were around the 50% cutoff.

To continue qualifying for a student loan in New Zealand, students must pass at least 50% of their classes after two years of study. Some 10% of students fail this requirement and are considered low-performing students.

We compared outcomes for students just above the 50% pass rate threshold to those just below. These students are similar in all aspects except for loan access. Therefore any differences in outcomes can be attributed to whether or not they were able to access a student loan.

Several findings emerged from our work. First, in what may not be a surprise, three-quarters of students struggled to find other funding and were not able to re-enrol in study without loan access.

Second, low-performing students with loan access – those who just made it over the 50% threshold – were about 60 percentage points more likely to graduate than those without, even though they take roughly six years to complete a three-year bachelor’s degree.

#LISTEN Fees-free is encouraging students to study at university when they may not have considered it otherwise, but many of them aren’t doing well once they get there, a report has found.https://t.co/mhy1wWlziT

Its important to note that New Zealand’s tertiary education sector is generally well-regulated. This is different from some other countries grappling with the issue of student loans. Our findings suggest that, instead of limiting individuals’ loan access, regulating low-quality education providers and their access to student loan dollars is more effective in places such as the US.

Individual responsibility and a public good

Even after repaying the debt, the net present value of a student loan for someone who works 30 years is estimated to be around $300,000.

Considering the life-long benefits of higher education, there is an argument to be made that low-performing students should retain student loan access, even if they are struggling to pass.

In fact, our calculation shows that providing these students with loans is a good public investment because the generated income tax will exceed the cost to the government.

Ensuring students access through the loan scheme is an effective way to guarantee access to tertiary study and, consequently, economic potential in the long run, regardless of grades.