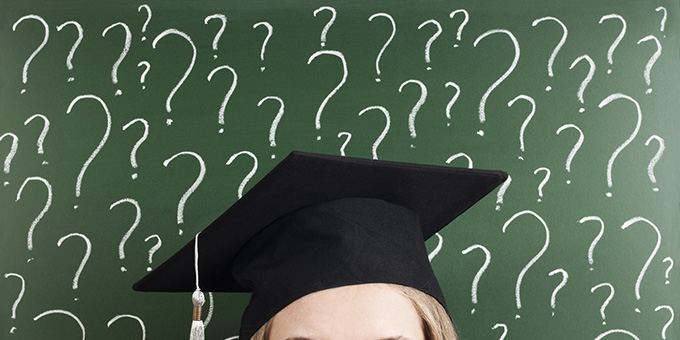 There is a huge glut of graduate school-graduates who are basically unemployable. Part of the reason for the unemployability of these people is many of these degrees are bogus, either “for profit” degrees purchased online or in fields of no actual demand.

Adding to the unemployability of the graduate degree is an undeserved “joker” quality attributed to an Education degree. Yes, you can get a “real” degree in chemistry, mathematics, or other academic subject, demonstrating knowledge and understanding, or you can get a graduate degree in Education. For an inexplicable reason (outside of money), administration feels that an Education degree somehow grants understanding of everything else, and so those academic degree holders find themselves competing not just with their own field, but with this strange Education field which believes “knowledge how to teach” is far more important than “knowledge of what you are doing.” Granted, in the many highly watered down courses that now make up the bulk of higher education, graduate level training doesn’t matter anyway—I’m pretty sure I could teach 6th grade math (a huge part of higher education today) right out of high school, after all, and it isn’t just mathematics that’s been heavily watered down.

But the fact still remains we’re sucking people deep into debt for graduate degrees that, even if in a challenging field, have no value in the current marketplace.

The end result of this huge glut is administration in higher education sees little need to treat these over-educated people with any respect, and dooms them to a life of temp work as adjuncts.

American universities spend half a trillion dollars a year. Very little of that money goes to the people who do a huge part of the teaching: the adjunct professors, academia’s hidden underclass.

–to clarify, we don’t spend that money, it’s sucked up by a grotesquely overpaid administrative class.

I know, things are tough all over, and I know there are few real jobs available in any field, anymore. But our predatory administrators in higher education are being facilitated by our broken accreditation process (run by the same administrators) and the student loan scam to hurt our citizens coming and going.

The kids coming into the system are ripped off, being charged insane amounts of tuition for an education provided by people that barely get enough to survive.

The people coming out of that system get ripped off again, as they’re pushed into a graduate school, where, if they graduate, they’ll get a job that pays no more than pouring coffee in any event.

A single course might well cost $1,000 for the student. There could easily be 50 students in the class (and there really are college courses with a 1,000 students in them now). Of the $50,000 in tuition the course brings in, the adjunct gets about 4%. The rest of the money goes to administrative overhead, at least in public, tax-supported, institutions.

I teach a Public Speaking lecture class of 150 students. I make 15k.

–yet another adjunct trying to follow the money and easily able to tell it’s not going to him.

The de-professionalization of the college professor is the biggest open secret in higher education. It’s a marginal existence for people that really expected their graduate degrees to provide a legitimate living.

Hands down, the biggest NIGHTMARE of this whole situation (aside from the obvious indignity and abysmal pay) is the lack of healthcare. Because I make such little money at the university I qualify for Medicare. However, because my income keeps oscillating due to the part-time work I pick up I have to report income change every month. This means I oscillate on and off Medicare and Covered California and have to deal with the circle-jerk paperwork of healthcare on an almost monthly basis. You can imagine what a sh*t show this is. At this point I just don’t EVER go to the doctor and I’ve gone off birth control because I have to meet with a doctor every time I change health care providers and my prescription won’t be honored every time I change insurance status.

Look, maybe we should no longer be treated like professionals. I understand how supply-and-demand works, and with graduate Education degrees available online by the bucket load, I can see how “real” degrees just don’t count for much. But then why is tuition so freakin’ high? If educators are basically worthless, and educators are the primary cost of education, why is college so expensive?

Why is this question not being asked very, very, loudly?

It isn’t just that the adjuncts are underpaid by a wide margin, they’re overworked.

The catch is that the classroom hours for my courses add up to six hours each because I teach art studio classes. There is certainly no extra compensation for hours spent grading, planning, meeting with students, completing university paperwork, or answering emails – which add up to at least another 3 hours each week.

There really is more to teaching than just standing up and talking for 3 hours a week…there is much preparation and grading to do. Doubling the class size does wonders for administrative pay, but adds quite a bit to the work load, I promise you.

The level of respect adjuncts receive is…insulting. Granted, even as full time faculty I’ve been on the business end of extreme disrespect from administration (hello community college!), but administration really gives nothing to an adjunct:

I do not have an office. I have to use my personal laptop to perform any necessary computer tasks. I do not see my contract until the semester has already begun, usually about a month into classes. I do not see my first pay check until six weeks in. My contract states that it can be cancelled for any reason the university sees fit. I am not given a faculty parking decal and have been issued parking tickets from the university on two occasions…

–I’ve yet to have a contract that didn’t allow cancellation for any reason.

The fee for my parking decal is taken out of my paycheck every month. I know, things are tough all over, and I might be a little out of touch with how bad it is in the non-academic world; do employees in the “real world” have to pay to park on their employer’s taxpayer-supported parking lots? It’s not like I park within sight of my building.

The truth is that I have watched the university flood millions into new facilities. There is no shortage of funds. There is only an administration intent on perpetuating the surge of dollars that lines their own wallets and increases the sparkle of their legacy. They don’t see adjuncts as people. We are a second-class answer to a budget problem and receive no accolades, no benefits, no professional titles, no grant money, no sabbaticals, and no other perks afforded to the full-time faculty who perform the exact same job.

Like everyone else in higher education, we see the huge amount of money pouring in…and we see the money not going anywhere near education. But this is a distraction.

We are told, over and over and over again, that education is the key to a better life. Unfortunately, our educated class is being starved out of education, and is forced deep into debt for the privilege of such starvation:

Every dollar I make from teaching goes to paying my student loan. It is a ridiculous cycle. If I didn’t have a secondary income I would qualify for government assistance. I know plenty of adjuncts who get by on food stamps and live in questionable neighborhoods. That is the kind of image that most people assume is pretty far from the ivory tower.

The more you look at higher education, the more insulting the treatment of adjuncts is. Administrators and support staff get insane pay, even when there’s very little happening on campus (like in the summer). For adjuncts, they get nothing during slow periods.

A person who works as a secretary gets paid even when there’s no one in the office, flight attendants get paid even when they’re not on a plane serving customers … most of the jobs in this nation guarantee a salary even if the employee isn’t always engaged in work.

I’ve written before of the immense irresponsibility of higher education, and adjuncts here came to the same conclusion I did:

I applied to 50+ jobs this year and got one interview. ONE. Friends in the industry say it will take more than 2 years of being done with the PhD to get a job and if I want to do this I’ll have to live in a financial minefield for that time. It takes most people 4-5 years right now because schools aren’t opening new jobs. This is hitting when I am 32 years old, right when otherwise I would have been saving to buy a house or start a family. I have no job security and very few prospects in spite of earning the top degree from one of the best universities in the world…Someone else told me that no one at Harvard in their field got interviews this year. Universities stopped producing jobs long ago but they continue to produce PhDs…