The ecological transition is on everyone’s lips, both internationally and in the European Union and the countries around us. In Spain, an ad hoc name has even been created for the ministry, before Environment, which indicates the current focus of its mission: Ecological Transition and Demographic Challenge .

Although an ecological transition does not depend only on a ministry, but also involves the government as a whole, companies and society.

Social change for a possible future

In other words, it consists of transforming the future together so that the way of living (and consuming) takes into account environmental limits and does not exceed them. This will allow future generations to live on a planet even better than the one we have inherited.

It is, as can be seen, a major challenge.

And in relation to building this social change, the Government of Spain has announced a budget for “ecological transition of educational centers”. This is good news because focusing on children and adolescents is always betting on the future. And in this case, design the best possible future with those who are going to live in it the most.

But it is necessary to review what this budget should be used for so that it is not an opportunity not taken advantage of in depth. And because we must face this challenge with serenity and success for the continuity that this cause deserves.

In the first place, it would be key to distinguish between two issues regarding schools: software and hardware .

The software is the main thing: education, what is taught in them. But the hardware also has its weight. It is in the buildings of educational centers and in school environments where the lives of students take place for many hours a day.

The environment as a protagonist

Regarding education, the challenge of the ecological transition must be incorporated as a framework and in a transversal way. As the ecologist Alain Lipietz points out, the environment (territory, space) is no longer the backdrop for the events of history, but rather its current protagonist .

And this means that it should not only be the content of a subject or a series of subjects. In the words of the researcher Katia Hueso, “we must educate in nature and teach eco -literacy . ” Just like in the eighties and nineties, some of us learned to recycle at school. And we teach it at home: the ecological transition has an ally in schools that must be reflected in each of the subjects and syllabi. 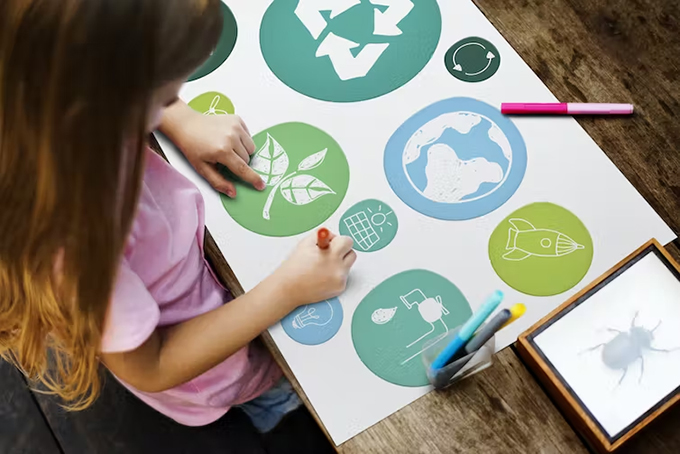 A complexity without compartments

The researcher César Rendueles speaks of the clamorous deficit in environmental education at the university. This is something that is changing, fortunately, although there is much to be done. This is also the case of educational centers, where the ecological transition has not yet been clearly incorporated.

Schools can favor the creation of environmental citizenship : future citizens who understand the world and its challenges and who do not close their eyes to them. The instruments (language, mathematics, etc.) that are taught in the centers are the tools with which we create another future.

The power of a teacher, trained, informed, is enormous. I, for example, still remember my teacher Paloma, when she told us almost three decades ago that in the future we would address the problem of energy, and that the development of renewables was going to be our work challenge. This matter, now, is the present.

Teachers must free themselves from part of their tasks so that they can be trained to train in ecological transition. It is part of the investment that must be made.

Examples of environmental comfort and laboratories for society

Another key issue is to intervene in buildings, courtyards and streets around the centers to achieve ecological criteria and adapt to climate change. So that we can have safe and natural school environments that support the process of ecological transition. Especially for practicing by example.

Does it make sense to talk about climate change while children suffer from high temperatures in classrooms? And promote non-pollution while there are no bike racks in schools? And that recreational spaces and school paths do not have trees that improve temperature and comfort?

Theory and practice in educational centers

Improving the climate resilience of schools and institutes should be a good part of the investments. An ambitious vision that turns schools into laboratories so that children and adolescents are the protagonists of change.

Installing renewables, improving the building envelope or planting trees: these are all actions that make a difference. With information, with transparency, explaining what is being done and why it is being done.

Schools should be preferred public buildings for green transition improvement pilot projects. But we must reach each child: the one from the village and the one from the city. Therefore, a systematic program of investments in school environments is necessary to improve these centers, for social and intergenerational justice.

Education is a task that never ends. And that transmits certainties that must be learned. In times of uncertainty it shows the possibility of a better future for our children. Science, including social and educational, allows us to design the future.

We can make education a carrier pigeon.