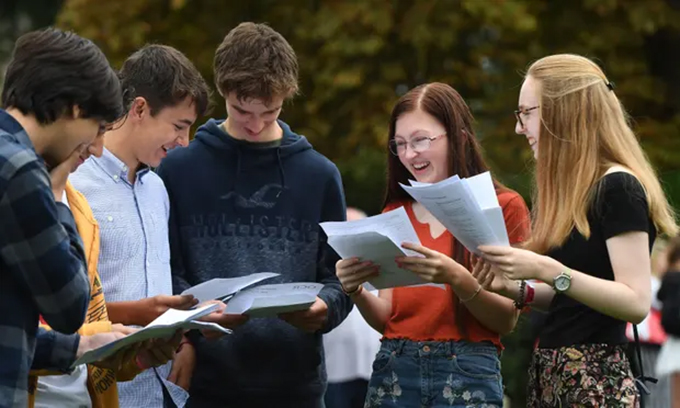 There is a gender divide in the subjects teenagers choose to study. In 2022, 63% of UK GCSE candidates taking full-course Physical Education (PE) for GCSE were male. For Art and Design subjects, though, boys made up only 35% of the students taking the subject.

The subjects students choose to study carry gender meanings. Research on boys and education has shown that Stem subjects (science, technology, engineering and mathematics) and PE are understood as masculine.

Research has shown that children associate science with males and masculine traits from an early age. One study found that boys were more likely to express gender stereotypes about scientists.

On the other hand, subjects like English may be considered less masculine because of their perceived irrelevance to traditional “men’s work”, lack of set answers, and emphasis on emotions.

Subject choice, then, becomes what is known as an “identity resource”: something individuals can use to build up their self image. Boys can draw on these identity resources to establish their masculine credibility with their peers.

These stereotypes impact on secondary school students’ career aspirations and higher education choices, when self image and the image of an academic subject as masculine or feminine do not match.

Research has shown that when young people rigidly conform to traditional gender roles, they are less likely to fulfil their academic potential because these gender roles affect the subjects they go on to study. In this research, a strong masculine image of maths and science significantly decreased the likelihood of female students choosing a Stem major at university.

Religious Education (RE) is an example of one such gendered subject. I conducted research, published in 2014, into boys’ views of RE in three secondary schools in the north west of England. I carried out group and individual interviews with 35 boys aged 14-16.

My research showed that for many of the boys, RE wasn’t on their agenda because it wasn’t an identity resource they wanted to use. I found that there was a link between what boys thought about RE and their ideas about masculinity.

While RE at Key Stage Four is a statutory requirement in England, which means that many schools will require students to take it at GCSE, it is not compulsory to undertake the GCSE examination course. In some schools, it will be offered as an option.

One of the boys I spoke to had chosen to study GCSE Religious Studies, but told me that his male friends had opted for PE and resistant materials. Boys who liked RE, and chose it when it was offered as an option, were bucking the gendered trend.

One told me that he hadn’t lost his “reputation” by choosing Religious Studies GCSE instead of PE. The boys I spoke to who had chosen to study Religious Studies for GCSE identified themselves as “the mature people” because of their interest in what they called the “big questions”. They differentiated themselves from boys who would just “mess around”.

Studying subjects like Religious Education allows for discussions of questions of belief and spirituality. The gender roles that lead to boys deciding against studying such subjects may lead to disengagement from subjects that address questions of meaning, purpose and value.

In my experience as a secondary school teacher and researcher, I found that boys will engage with subjects like RE when teachers make the connections clear between RE and real-life issues. The way to find out what these issues are is through talking to young people and learning to listen to their concerns.

Schools can take steps to create a more gender-equitable environment. This could involve lessons which debunk myths about subject choice and gender, and which allow both boys and girls to question gender norms – creating a more equal environment which offers them greater possibilities.