The COVID-19 pandemic since the beginning of 2020 has increasingly made scientists have an important role in science communication to explain scientific problems accurately. Their role is getting bigger in dealing with global health issues.

However, science communication by scientists often triggers public controversy. In fact, not a few leave information that is not correct ( misleading ) for the general public.

A recent example of this contention and misinformation can be found in the case of Eric Feigl-Ding and colleagues’ opinion article Let’s call monkeypox what it is: A pandemic in The Washington Post , July 7, 2022.

#BreakingNews WHN declares #Monkeypox a #pandemic. There are now 3,417 confirmed cases reported across 58 countries and rapidly expanding across continents. It will not stop without concerted #precautionary global action. https://t.co/frgxxIGTEr #MPVX #globalaction #disease pic.twitter.com/tAE9wE0PPl

Gabby Stren, Director of Communications of the World Health Organization (WHO), on July 8 directly denied Eric’s information via Twitter that Eric’s version of the monkeypox status was less accurate.

Hi @DrEricDing, It’s been a while since we connected –hope you’re well. I’m reaching out to suggest that the next time you wish to tweet about @WHO, you should feel free to reach out ahead of time to avoid inaccuracies.

Although in the end the WHO released a statement of international health emergency (PHEIC) or pandemic on July 23, 2022 for monkeypox, until Eric’s article and WHN’s tweet were published, monkeypox infection had not been declared a pandemic. PHEIC status was also pinned on COVID-19 disease in March 2020.

Scientists need to think about the quality of scientific communication before they tweet information so as not to create confusion among the general public. Especially about health information that is directly related to individual and community health.

Quality science content in the wilds of social media

First , disintermediation, which is when everyone can be anything without clear boundaries. This condition is influenced by the media ecosystem which has grown rapidly since the era of social media.

Old actors in science reporting which are usually dominated by scientists, science journalists, and scientific institutions in the era of social media give birth to new actors from a wider variety of backgrounds.

In the era of the pandemic, anyone can engage in science communication without having to fulfill certain selections through social media. In Eric’s case, although he is an epidemiologist, he is not really commenting on infectious disease pandemics, something outside of his research studies that focus more on non-communicable diseases such as obesity, nutrition, and cancer prevention.

Second, this condition often gives birth to an infodemic, namely a flood of inaccurate information .

The case of Eric’s tweet about monkeypox is not the first to happen. Since his first tweet in January 2020, Eric has been dubbed a ” worrying attention seeker “. The contents of his tweet about a pre-printed scientific article published on January 31, 2020 claimed that SARS-CoV-2 (the cause of COVID-19) was an artificial virus engineered using the HIV virus.

The findings sparked conspiracy theories that the new virus might be a biological weapon and became a major controversy. Although in the end this preprinted scientific article was withdrawn a few days later and Eric’s tweet was later deleted , the upload has spread widely. Until now, Eric got millions of followers at least reaching 7.2 million.

In the midst of the lack of evidence and the lack of adequate information about COVID-19 at the time, Eric’s tweet became a reference for the general public. Some scholars have criticized that Eric’s tweets and threads are often inaccurate, sensational and hyperbolic, and do not carefully review scientific articles that have not been peer-reviewed.

Third , this situation further has an impact on the growing polarization in society due to differences in attitudes and ideological views that are contrary to scientific consensus.

The birth of new actors in science communication is a challenge for scientists and academics. They need to be better equipped to deal with the disruption of the new media ecosystem and the uncertain situation in responding to the issue of the global health crisis.

The role of the researcher in science communication is not only to describe various practices that transmit scientific ideas, methods, knowledge, and research to non-expert audiences in an accessible, understandable or useful way. However, because science communication is multidisciplinary, it requires awareness for researchers to know their limitations and open gaps for other fields of science to collaborate.

In the process of transmitting scientific knowledge to laymen, scientists need to pay attention to the quality of scientific communication.

This quality discourse stands out since the public discussion is busy discussing topics that have a high social impact such as climate change, vaccination doubts or the current COVID-19 pandemic.

The rise of social media can help. However, the limitations of dynamic scientific evidence in science journalism are a big gamble in the production of quality and accurate science communication content .

Science journalist Arko Olesk and his colleagues at QUEST (Quality and Effectiveness in Science and Technology communication) formulated twelve indicators of the quality of science in three dimensions: (1) dimensions of scientific trust and acumen, (2) message delivery style, and (3) connection with Public. More details are in the table below. 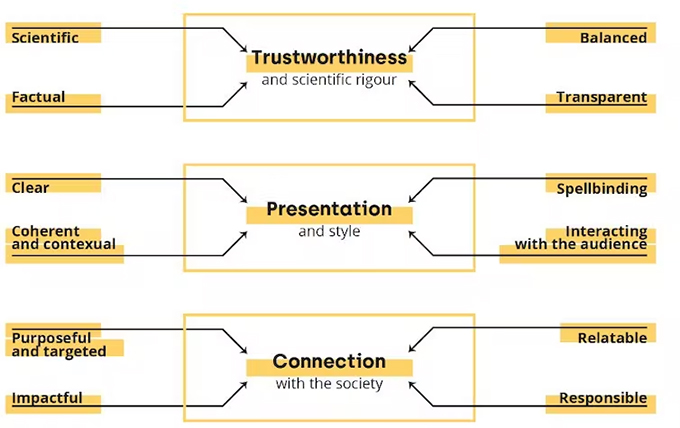 12 indicators to measure the quality of science communication. QUEST

Indicators of this dimension are reference sources of information taken from scientific references that are factual, balanced, and transparent.

Message delivery style focuses on how scientific content is presented, understandable, interesting and has meaningful interactions for the public.

The challenge in this dimension lies in how scientists can balance efforts to attract public attention without sacrificing the value of objectivity, transparency, and reliable scientific principles. These dimensions include message clarity, message coherence and contextualization, appeal and allure to bring the audience closer to more complex science topics, and interact with audiences by means of dialogue and feedback.

This dimension includes clear targets and goals, has an impact on social and individual change, and is related to everyday phenomena or current events. In addition, scientists are responsible for the scientific information submitted has a controversial side and has implications for scientific ethical standards to avoid damage and public disinformation.

Several dimensions of the quality of science communication described in these twelve indicators can help scientists to communicate science to the public. We hope it will help people to understand science as a part of everyday life.

The most important thing is that scientists can encourage a critical culture of society in responding to environmental situations to form better individual decisions based on accurate and credible science.