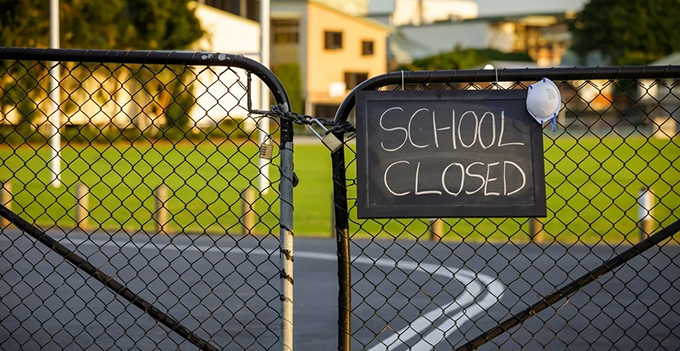 When a state of disaster was declared in South Africa in 2020 in response to the COVID pandemic, a hard lockdown was instituted and schools were shut. This was followed by varying periods of lockdowns, school closure and rotational timetables to maintain social distancing across different grades.

Administrative data show that children in South Africa missed at least three-quarters of a year of school in the past two school years. This reduced their opportunities to learn and allowed more time to forget what they had learnt.

To measure the effect of time out of school on learning, we analysed the test performance of almost a quarter of a million learners at the end of 2021, comparing them to performance in 2019.

We found that the time out of school left public school learners in South Africa about a year behind previous cohorts.

Earlier studies on learning losses in South Africa, mainly in poor schools and with relatively small samples, found similar results. Our study used data from the Western Cape province’s Systemic Test, which tests all public school pupils in grades 3, 6 and 9. None of the country’s other eight provinces tests learners on such an extensive scale – so the Western Cape’s data is the best opportunity to measure learning loss.

Because we measured learning losses in both rich and poor schools and in three grades across primary and secondary schools, we can generalise with some confidence to the whole country and to all grades.

The findings are important for all those with an interest in education, from government officials to teachers and parents. These tests were conducted in both mathematics and language, which form the foundation for learning in most other subjects, both in school and beyond.

The Western Cape Systemic Test system has been in place for two decades. Every year almost all public school learners are tested in mathematics and language in grades 3, 6 and 9. The pandemic prevented testing in 2020. We analysed the 2019 and 2021 tests. Most questions were exactly the same in both years to allow valid comparison. We analysed only the common questions.

The figure below shows average learner performance and learning losses between 2019 and 2021. The arrows reflect large learning losses in all six tests, but much larger losses in mathematics than in language, consistent with international experience. 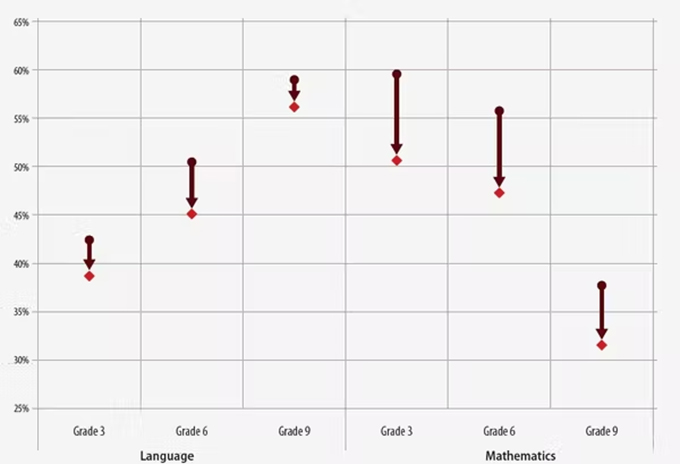 Learning losses by grade and subject from 2019 to 2021. Provided by author.

In language, the biggest learning loss was in grade 6. Most South African learners are taught all subjects in their home language in the first three years of schooling. From grade 4, they switch to being taught in English in all subjects except their home language. Even in 2019, schools where there was a language transition from isiXhosa (one of the home languages used in Western Cape schools) to English performed weakly, but in 2021 they also experienced larger learning losses. The pandemic may have made this difficult language transition even more difficult.

Moreover, the language problems may also have affected grade 6 mathematics performance, because language is key to understanding other subjects.

As expected, learning losses were on average smaller in schools serving the richest communities. But even learners in these affluent schools lost around two-thirds of a school year. The Western Cape has a higher proportion of rich public schools than other provinces. There are more learners in the Western Cape who attend well resourced schools and with higher levels of parent education compared to other provinces. Thus learning losses may be even larger in poorer provinces.

Losses were smallest in grade 9 language – in fact, rich schools experienced almost no learning losses in these tests. The reason may be that language at this level is less dependent on school-based learning. Or it may be because the common test items we could analyse contained less writing.

In all the tests, girls significantly outperformed boys, except in grade 9 mathematics in 2019. But because grade 9 boys experienced greater learning losses in mathematics, their earlier performance advantage disappeared in 2021.

What does this mean for South Africa’s performance on international tests?

The Trends in International Mathematics and Science study of 2019 found that 63% of all South African grade 5 children performed below the low international benchmark in mathematics. This may now rise to around 76%.

For reading, the proportion of grade 5 pupils who score below the low international benchmark in the Progress in International Reading Literacy Study 2016 reading tests would rise from 80% to about 88%.

Younger learners can catch up over their school career. But teachers now have an even more difficult task to cover the curriculum for each grade, and to fill some gaps in understanding from previous grades. This is especially true for a subject such as mathematics.

The schooling system needs to find more time for maths, to overcome the accumulated deficit from the COVID years. For instance, grade 9 learners who have fallen a year behind in mathematics need to catch up a full year before the matric examinations (grade 12, the final year of secondary school). This requires them to learn as much in three years as previous cohorts learned in four.

In language, the big challenge is to ensure that reading is mastered by the end of the foundation phase – the third year of schooling – and to ease the subsequent language transition. Weak reading skills and an inadequate English vocabulary can inhibit all further learning for the majority of learners who have to make this language transition.

Author Bios: Servaas van der Berg is Professor of Economics and South African Research Chair in the Economics of Social Policy and Chris van Wyk is a Researcher both at Stellenbosch University