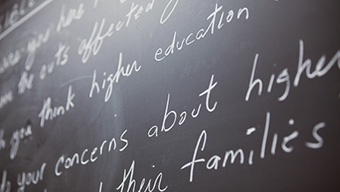 Higher education is misunderstood and struggling financially, but the majority of college and university presidents are increasingly confident that their institutions are financially stable. These seemingly contradictions were found in Inside Higher Education’s annual survey of 706 campus leaders.

Let’s set aside the obvious political concerns among presidents about the Trump Administration or the selection of the new U.S. Education Secretary that underscored many of the questions put to the presidents in the IHE survey, which was conducted in January and early February.

It’s really too soon to tell what the new policies will be toward higher education or what rollbacks of disliked Obama Administration programs and dictates are likely to occur. President Trump has paid scant attention to higher education during the election, the transition, and the first months of his tenure.

The higher education community will have a lot to say as positions and platforms become clearer. But these comments should be seasoned and informed after the fact and not anticipate the best hopes or worst fears before the first steps occur.

The findings that address the climate facing American higher education are the most fascinating.

Disconnect Between Academe and Much of American Society

Perhaps the most interesting finding is that the “2016 election exposed a disconnect between academe and much of American society.” Seventy percent of the presidents sense a growing level of anti-intellectualism in American life. Two-thirds of the presidents agreed that campus protests created optics that the American public interpreted as unfriendly to conservative views.

The presidents were especially concerned that the current political climate works against consensus views on science, including but not limited to areas like climate change.

A majority of the presidents agreed that higher education suffered badly in public perceptions, including in areas like campus diversity and inclusion. They believed that campus racial unrest “led many prospective students and families to think colleges are less welcoming of diverse populations than is really the case.”

These concerns extend to the heart of the higher education enterprise. Eighty-four percent believe, for example, that media attention to the rising levels of student debt makes a college education seem less affordable than it actually is. These presidents are also frustrated by the media obsession with a few institutions with large endowments that paints all colleges as wealthy when in fact most of them are not. The majority of presidents also agree that the construction of Taj Mahal-like facilities in rising competitive consumer wars contributes to these perceptions.

In addition, the presidents were concerned about the attitudinal gulf between their concentration on students as individuals who graduate as educated citizens and the “graduates as workforce” focus of most of American society.

Alison Kadlek, senior vice president and director of higher education and workforce engagement in higher education at Public Agenda, notes in the IHE survey release: “What we’re hearing is that the tight connection between education and socioeconomic mobility has been weakened for the public, and confidence in college as a certain path to economic security is waning….”

In other areas, there were signs of improving perceptions. Public college and university presidents were increasingly confident, for example, in the financial stability of their institutions. But among the uncertainties and anxieties faced, the one dominant feature remains a weakening public perception of American higher education.

One lesson seems obvious from the IHE survey. American higher education is not building a case that is sufficient – or, more troubling, even compelling — for the role it plays in American society.

Higher education leadership has failed to capture the narrative succinctly to explain the value proposition to American families and their children, politicians, business leaders, and the wider public.

The belief in the bedrock principle that higher education is the best path into the middle class seems increasingly at risk.

Leadership carries with it considerable risk. But if America’s colleges and universities lose control of their own narrative, they subject themselves to a broad-brush analysis that no longer resonates with key stakeholders, like the American families upon whom they depend for tuition and other means of support. Higher education also runs the risk of being painted less than comprehensively, defined instead by one issue or perception rather than the whole of its parts.

In a sense, the best solution is to violate the principle that all politics is local by thinking about how to craft perceptions beyond the college gates.

While it is heartening to articulate a series of high road value statements about the lasting importance of a college education that will always ring true, the message must also account for the realities that colleges and universities face in the 21st century.

In today’s climate, it may be as critical to stress how colleges and universities transform lives, meet workforce needs, and shape the development of American society as to rely on older arguments about educated citizens.

The goal is the same. It’s just that the language needs to be re-imagined and re-stated more clearly.