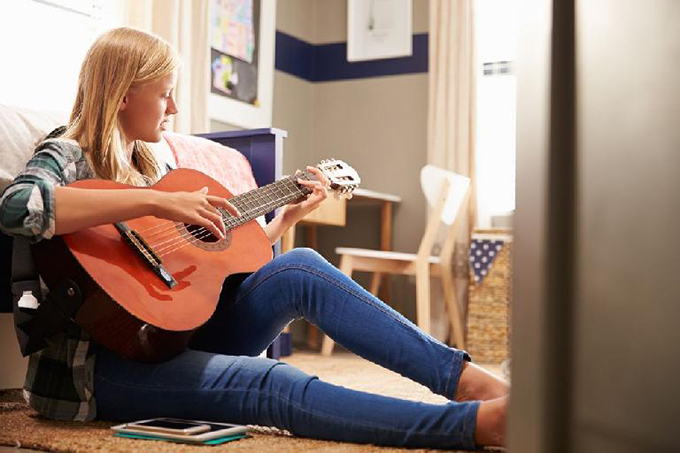 They say that Mick Jagger, the leader of the Rolling Stones, said that everything worth doing is worth overdoing (” Anything worth doing is worth overdoing “). Music, which has made the Rolling Stones so famous, is one of the activities that societies have valued and practiced the most. The songs appear in social events to express group identity, as in hymns, and emotions, which are contagious or serve as relief.

Playing an instrument involves a large amount of learning and cognitive demands (perceptive, attention, etc.). So it is not surprising that prolonged practice improves listening and rhythmic skills . It is also associated with a larger size of brain areas dedicated to auditory, somatosensory, and motor perception .

An example of brain reorganization is seen in pianists, who use both hands when playing. In right-handed people, it is common to observe a larger size in the left motor cortex (the one that controls the movements of the right hand). However, pianists show greater symmetry between both hemispheres.

Likewise, playing the same instrument for years changes the relationship with its sound. The response of a trumpeter’s auditory cortex is much greater for sounds from a trumpet than from a violin . The opposite happens for a violinist.

The case of music is not isolated. Other activities that involve perfecting a skill have their imprint on the brain. Professional taxi drivers develop a larger size of the posterior hippocampus, an area of ​​the brain that is associated with spatial navigation. And juggling training produces changes in the size of areas responsible for processing movement.

In the last 30 years, many studies have observed that the benefits of music extend beyond hearing and motor skills. Playing an instrument improves mental abilities in general . For example, music promotes functions such as reasoning or memory.

The changes to these other abilities are more modest. But the simple fact that musical practice increases performance in reasoning or memory tasks has aroused the interest of the scientific community: why does musical practice affect capacities that are not directly trained?

The most common explanation has been that musical practice increases brain capacity and its functions. Thus, as it is necessary to attend or memorize during musical practice, these functions would be enhanced. But this theory fails to explain many of the results. What other theories could be viable?

When performing a piece of music, finger movements are converted into sounds. And often visual symbols like notes or tablature guide those movements and sounds. Therefore, the auditory-visual-motor interrelation is one of the most genuine characteristics of music.

The brain of professional musicians works in a multisensory way. When they listen to works that they have already performed, the motor areas of their brain are activated . And conversely, moving the fingers as if they were playing a piece produces the activation of auditory areas .

In fact, listening accompanied by movement has been shown to produce greater changes than training listening to music alone. One possibility is that musicians, accustomed to perception rich in sensory modalities, tend to apply it in other contexts. For example, activation of the visual cortex is observed in musicians when they memorize words that have only been heard. And most critically, this additional brain activity is associated with sharper memories.

Therefore, it could be that musical practice modifies the way in which we represent reality. As with synesthesia , a multisensory perception would enhance everything from the memories of events to how we use them to make decisions and reason.

A second possibility is that musical practice encourages the development of new mental strategies. By adopting more efficient cognitive routines, musicians could overcome many of the difficulties of playing an instrument. But what if they applied these new strategies in other contexts?

This would be the case of rhythm. The complex rhythmic structures that exist in music and the importance of playing in time promote rhythmic strategies. But many other activities follow repetitive sequences.

One of them is language, with stress and emphasis structures that help the listener to learn it and extract the meaning. People who are better attuned to the rhythmic structure of a language , including musicians, learn it more easily.

Finally, we must think that the brain tends to be adapted to the present. But achieving long-term goals, like mastering an instrument, means giving up that balance in the present. That is, we stop doing what we feel like in search of a better adaptation in the future. This is experienced as a great effort that, whether physical or mental, is aversive. Hence, we try not to exert ourselves for long periods of time and opt for less expensive activities.

Although every effort well applied carries its reward. Properly managed, effort allows us to reap greater rewards in the future . Thus, as a paradox, the fruits of our effort , be it a plate of food or a piece of furniture that we have assembled from scratch, acquire greater value.

Music practice is a very reinforcing activity: the reward is intense and encourages you to keep trying. It is possible that these rewards (the music itself, the applause, etc.) reverse the negative value of the playing effort . Furthermore, they could turn effort into something positive in all contexts.

In this way, musical practice could promote effort. Musicians may not have better reasoning and memory skills. But learn to manage the effort successfully, which leads them to make better use of their abilities in different areas of their lives.

Author Bios: Rafael Roman Caballero is a Researcher at the Faculty of Psychology of the University of Granada / Mind, Brain and Behavior Research Center and Juan Lupianez Castillo is Professor of Experimental Psychology and Cognitive Neuroscience. Department of Experimental Psychology / Mind, Brain and Behavior Research Center both at the University of Granada