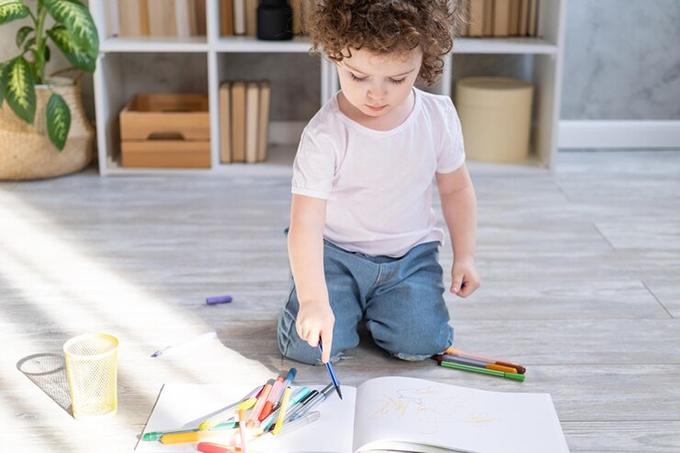 Drawing is one of children’s favorite activities. From scribbling to more accomplished productions, their drawings tell us about their environment . However, children are immersed in a consumer culture and academic works converge to emphasize that the consumer society is particularly investigated by them when they draw.

Based on this observation, researchers interested in this field are increasingly using these graphic media to capture what children learn and understand about consumption.

Given their cognitive abilities, children primarily process information via visual elements. Thus, in the context of workshops, researchers who ask children aged 7 to 12 (concrete operating stage, according to the developmental psychologist Jean Piaget ) to draw products or consumer situations, all come to the same conclusions. . The children summon many details, testifying to a good interpretation and memorization of the specific attributes which categorize the products and discriminate between the brands: logo, graphic charter, mascot, packaging…

Similarly, when they are present alongside the young participants, the researchers note a great application of the children to reproduce the colors and shapes that characterize the brands.

Moreover, even when the child is not asked by the researcher for a specific instruction, it is not uncommon to find one or more marks in a drawing. These are then mobilized to reinforce the realism of the production, undoubtedly illustrating the importance that the children grant to them in their daily life.

Some of the participants add slogans, thereby emphasizing their understanding of the link between brands and advertising. The presence of products and brands associated with promotional messages in children’s productions shows the extent to which these different elements constitute resources in the construction of their consumer culture.

Beyond their knowledge of products and brands, children know how to differentiate the contexts in which they are consumed. Thus, they represent the physical places of consumption but also the resulting social environments. They are able to distinguish products that are consumed in the home – and then draw their family members – from other products that are used in places outside the home.

From the status of a meal perceived as harmless, the snack has passed to that of a highlight of family conviviality with periods of confinement. Shutterstock

For example, in a meal taken in the canteen, there will be various tables and chairs to signify a meal taken in a collective setting. We will also find many children to report the commensality induced by these meals taken together. Another example, if we ask children to draw a snack without detailing the instructions, they will produce drawings where they will imagine themselves eating, where they will represent their own snack, but they can also draw a birthday snack where many artefacts will be staged underlining the occasional and festive character of this meal.

Each situation drawn is then linked to typical products, demonstrating their skills in identifying the “right” objects and the “right” people depending on the circumstances. The inventory of objects associated with the characters (family, peers, educators, etc.) also suggests that children perceive very early on the symbolic and social dimensions attached to consumption.

Given the issues related to a healthy and sustainable diet on their health and well-being, children are often approached on this subject by researchers and consumer specialists. The drawings made provide access to their food repertoire and their individual preferences. They also reveal the products and brands that are associated with eating well or are factors for them of well-being.

In addition, the drawings show that the children know the codes used by the food industry to inform consumers that a product is healthy  : use of green or yellow colors, reproduction of labels or the Nutri-score… Their drawings then question on the right levers to activate to encourage changes in behavior. Some children also give themselves some solutions to adopt in their productions: “give good points, avoid advertising, make sweets that do not damage the teeth”…

In the same spirit, our empirical study on the ecological awareness of children , carried out among 42 of them aged 7 to 12 years (17 girls and 25 boys) shows that the main causes of global warming that they identify are all consumption. Black and gray colors are used to stage smoke emanating from cars or factories. This tends to suggest that they have internalized the fact that human activities pollute and that this endangers the planet, which is represented in the form of a sad face sometimes covered in tears.

If the children show strong emotional reactions to global warming, their drawings trace few solutions to fight against this phenomenon. No doubt we should see their difficulty, just like adults, in evolving in a consumer society under pressure.

From representation to imagination

If the drawings reflect the way in which children take hold of the consumer society, they also make it possible to capture their imaginations, to identify their aspirations and to analyze the discrepancies with the existing. For example, as part of research on distribution signs, 95 children were asked to represent “the ideal store, the store of their dreams” using an A4 sheet and 32 markers, 18 colored pencils and pencils.

The researchers note that all the children gave free rein to their creativity, freeing themselves from rational constraints in favor of playful, poetic, even magical considerations. The stores have been designed as places that enhance an enchanting shopping experience and in which they feel welcome and considered. These productions, rooted in divergent thought, undoubtedly constitute sources of inspiration for managers who wish to innovate by taking into account the expectations of their young clients.

Consumption imaginations have also been called upon in the context of a study on children’s representations of the ingestion of insects . The children offer insect-based recipes in their drawings and point out, from this point of view, that their consumption arouses less disgust than among adults and could therefore be envisaged in the near future by activating the right levers.

Far from being a banal object arousing the pride of tender parents, children’s drawings are cultural productions and as such constitute scientific resources to access their practices and their representations as young consumers. The analysis of these children’s productions can feed reflections, design actions in phase with their point of view, likely to increase their well-being in a consumer society which makes them play central roles as prescribers and future citizens. but whose opinions are ultimately little claimed and little followed.

This “natural” activity of children is now being revisited by adults through design approaches that consider formatting (by drawing or model) as a transformation tool allowing them to capture imaginations, innovate or still build desirable futures around consumption. Undoubtedly proof that “a good sketch is better than a long speech”.