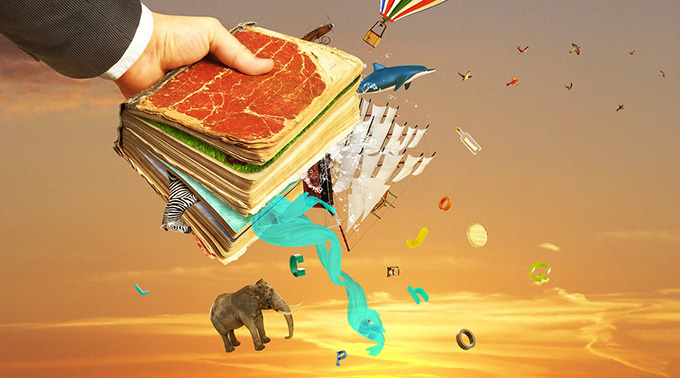 Fairy tales, which are said to be aimed at children , evoke a wonderful world a priori and most of them end on a happy or esteemed outcome. The peregrinations of heroes, however, aim to educate young readers by helping them discover the social world and the natural world. They do not avoid confrontation with danger, evil, fault. The universe of tales thus includes treason, jealousy , selfishness or cruelty  ; it gives to see poverty , violence , death.

However, it is difficult to imagine that it can be questioned in the tales of what we now call “handicap”. Yet even if the term is not attested in the XVII th  century, at the time of the tales or stories of time spent by Charles Perrault (1697), and it does not appear as such in the texts disability, whether physical or mental, is regularly represented in these stories that speak volumes about the reception of disability, or even how the image of the disabled person in the family is constructed and, more widely, society.

For example, Tom Thumb, in the tale of the same name Charles Perrault, stands out from his six brothers because he “was very delicate and did not say a word.” However, this physical weakness coupled with dumbness is interpreted as a deficiency: “taking for stupidity what was a mark of the goodness of his mind”, his family – brothers and parents – reject him and he becomes “the scapegoat of the House “.

The reaction of the family reflects very clearly the phenomenon of depreciation and rejection that is found at the level of societies quick to condemn the one who is suspected of non-functionality.

In the rewriting of verse that she proposes in 2007, Sylvie Nève ( Poème du petit Poucet , Trouvères editions and company) makes this phenomenon even more explicit:

The child so small / was silent so much:
had a hair on his tongue
a breath in his heart?
A club foot maybe?

She immediately denounces the hasty judgment of relatives who stigmatize the one that her parents have chosen to call “Tom Thumb”, which is a way to highlight what is perceived as a mark of inferiority.

It may be objected that in this tale the character, certainly smaller than reason, only suffers from a handicap. Because, as Sylvie Nève explains: “The child so small spoke little / it was that he listened a lot”. But the falsity of the judgment on the child and the lack of confidence which he suffers participate of a process of devaluation and exclusion very revealing of the representation that is made a non-inclusive society of the handicap.

At the end of the XIX th  century, when George Sand decided to write stories for her granddaughters and Gabrielle Aurore, she agrees to teach them through the filter of these wonderful stories “true things that everyone knows not “. “Things” of nature, of course, but also “things” of life, which include the gaze of the other and the obstacles imposed on the most deprived. The story The Wings of Courage , which deserves to be better known, is the story of the so-called Clopinet. We immediately understand that this other child has a name also stigmatizing: in all the brothers of this family of rich peasants of the country of Auge, the one “called Clopinet” is distinguished by “his lameness”.

Although it is hardly disabling, it makes him an object of reproach, as reveals the word of the father: “you do not know how to walk and you are afraid of everything”. And this word induces an exclusion: the father forbids Clopinet to realize his dream and to become a sailor by making him pass for “malingre” and “coward”.

Instead he forces him to be hired by a monstrous tailor, the so-called “Tire-à-gauche”, a beautiful character of a tale, close to the fantastic as it is deformed, but whose description “appalling” has for objective to amplify the representation that the child has of his own body.

Indeed, this man “hunchback of both shoulders, ladle of the two eyes, lame of the two legs”, drives Clopinet away from his home and his dreams by “planting him on his back hump and shaking his legs […] on his front hump. How to better represent the monstrosity to which the child is assimilated? This frightening image, still redoubled by the tailor’s animal, a donkey “as small, as ugly and as lame” as his master, gives shape to Clopinet’s vision, which results from the fact that the devaluing speeches projected on him have created .

If Tire-à-gauche threatens the boy to cut his tongue with his scissors, it is to signify the impossibility of freeing himself from the depreciative representations of which the subject is a victim.

The theme of monstrosity and that of animality, frequent in tales and source of lively emotions, can thus serve as a reflection on disability. This is what the Grimm brothers already did in some of their tales, such as Hans-mon-hedgehog , little known in France, who tells the story of a birth deemed unacceptable: that of an infant half boy half hedgehog – hybrid and so monstrous – and his parents, here again, choose (perhaps unconsciously) to exclude by affixing him a name that marginalizes him.

This tale has been the subject of interesting studies in the framework of “Disability Studies”  ; Ann Schmiesing in particular gave a nice reading , which shows the different mechanisms by which the family and society as a whole consider the disadvantaged child unfit to integrate into a productive or creative environment. In the tale, Hans is relegated behind the stove, until the day he chooses to go into exile in the woods, that is to say in nature where his deformity will go unnoticed.

These three examples are very revealing of the process of constructing a certain image of the handicapped person and the limits it imposes. But tales provide a space conducive to the evolution of stigmatized characters. In the case of Tom Thumb, who is the one thanks to whom his brothers are finally saved, it is morality that sets out to teach the lesson of history once and for all:

One does not grieve to have many children,
When they are all beautiful, well made and very tall,
And of an exterior that shines;
But if one of them is weak or does not say a word,
He is despised, mocked, and robbed;
Sometimes, however, it is this little brat
Who will make the whole family happy.

That said, the stories, if they make the choice to highlight the skills of these subjects, can preserve a certain ambiguity, which bypasses the dimension too idealistic (and therefore hardly credible) of certain denouements.

Hans can indulge his love for music in the forest, where he plays the bagpipes while keeping a flock. This faculty, which distinguishes it, can flourish freely in nature. If skills, even donations, are thus well recognized and valued as such in this case, we see that social inclusion remains problematic. It is only at the end that the character is given to marry a princess and change the night of the wedding into a “handsome young man” who has left and thrown his hedgehog skin in the fire.

But, as Ann Schmiesing explains, this choice, which is certainly adapted to the tale, where metamorphosis is almost constitutive of the genre, raises more questions than it solves because it suggests that only the aspect of normality will allow the couple to live in society. In this sense, the tale opens a whole questioning of the concept of integration.

The case of Clopinet is equally interesting, although for other reasons. The boy manages to escape, to survive on his own while discovering his environment and realizes his dream by becoming a naturalist and going around the world, which allows him to forget his disability that disappears as if by magic, but manifests again at the end of this long history, at the time of old age.

Achieving self-realization would thus erase the subject’s handicaps – which means that it is important to disengage from the debilitating representations projected by society in order to develop its own competences and that this possibility increases the subject’s capacities by a factor of 10, without, for in the pure utopia of a disappearance of the reality and the conscience of the handicap. Many stories lend themselves to such reading as long as one is sensitive to the details.

Andersen also tackles this sensitive subject in a subtle way. One would have to wonder why “The Intrepid Lead Soldier , “ missing a leg, is placed on the window sill and why, once found after his fall, “suddenly a little boy took it, and he was thrown into the fire without any reason, “as if in response to a terrible reflex of social exclusion.

And it would be the same, for example, to question the behavior of the Prince who refuses to recognize in the little mermaid , beautiful but deprived of her feet – the text insists on this point – the one that saved her, even after she s is metamorphosed to please him.