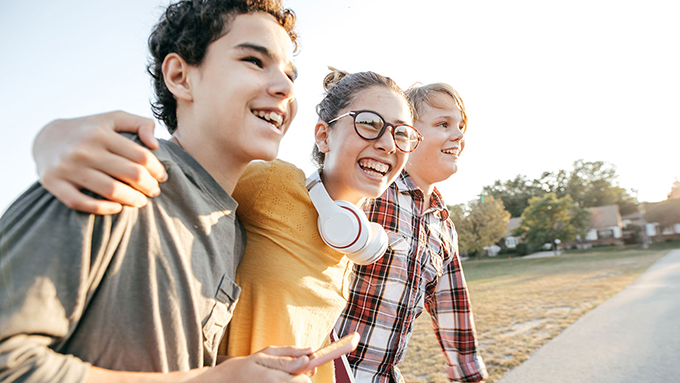 Adolescence is a period of individual transformation that poses many adaptation challenges for the adolescent, but also for those around him. It spans about a decade beginning with college entry. During this period when time spent with family members gradually decreases in favor of peer relationships, friendship plays a major role .

It results from a reciprocal feeling of affection or sympathy which is not based on blood ties or sexual attraction and is manifested by a voluntary closeness between two people sharing mutual ties.

During development, its understanding becomes more and more sophisticated. Teenagers define their best friend based on reciprocity and mutual compromise, emphasizing sharing similar interests, striving to understand one another, and engaging in intimate self-disclosures. The behaviors of adolescents with their friends are manifested by altruistic acts, generosity, cooperation, mutual aid and the resolution of conflicts to maintain the relationship.

While friendships serve important adaptive functions and protect adolescents from the deleterious effects of stress, research suggests that they can also be dysfunctional and produce negative effects, requiring the caring attention of parents and teachers.

At this pivotal period marked by the conquest of autonomy, friendships contribute to the emotional security and support of individuals, they provide affection and the opportunity for confidences, as well as they help them in their quest for self exploration and identity formation. The initial dyadic (pair) experiences also allow adolescents to acquire the social skills necessary to be accepted by their peers.

Once adolescents are accepted by their peers, a variety of different groups form, in which members have the opportunity to explore how a team works. They thus learn the qualities required for effective functioning in a collective context: social skills in a game of more complex interrelations , the sharing of common goals and cooperation.

However, things are not simple. It turns out that 25% of adolescents do not have peers who declare them as friends. The consequences of a prolonged absence of friendly relationships in adolescents are also frequently associated with withdrawal and aggressiveness.

With regard to the functions and issues related to friendships in adolescence, it is important to ask ourselves about the contexts and determinants favoring the emergence of friendly ties.

The influence of relationships to parents

Friendship relationships appear in a socio-cultural context that provides the opportunity for contact and closeness. Thus teenagers become friends with those they meet regularly in their class, their neighborhood, their extracurricular activities. From there, they sympathize with peers who are similar to them in terms of interests and abilities.

Although adolescents practice social skills to build and maintain a mutually satisfying friendship, mastering certain skills beforehand makes things much easier. Indeed, the abilities to initiate a relationship, to produce appropriate self-disclosures, to provide emotional support, and to engage in problem solving are strongly associated with the quality of friendship during adolescence.

Interestingly, Flynn and his collaborators showed that the nature of friendship between adolescents significantly reflected the image of their relationships with their parents for three types of behaviors  : hostile, warm and problem-solving oriented.

To measure these behaviors, the researchers asked adolescents about the frequencies of their parents criticizing or even insulting them, of understanding behaviors, and of listening to the teenager’s ideas on how to solve problems and solve problems. a willingness to help solve problems. The results indicate that a hostile, warm and/or problem-solving oriented relationship with the parents at the start of the fifth grade predicts the observed interactions with a close friend the following year.

In other words, adolescents recreate in their friendship interactions the original styles of hostility, support, and problem-solving experienced with their own parents. Specifically, teens with supportive mothers seem to mimic this behavior with their friends and ultimately have more satisfying friendships.

Friendships are a powerful force in adolescence, influencing many dimensions of young people’s lives, such as their academic performance , mental health, and prosocial and antisocial behaviors .

The characteristics of the friend are particularly important. The attitudes and interaction styles of the friend(s) do indeed influence the course of adolescent development. Thus, friends with more positive characteristics influence adolescents in a virtuous way. In a recent study, Miklikowska et al. (2022), showed that adolescents with empathetic friends become more empathetic themselves over time. Other researchers have shown that adolescents’ grades improve if they start the year with friends who have good results , provided that the reciprocity of friendship is present.

Interestingly, some friendships can be double-edged in the sense that their effects can be both positive and negative. Thus, by addressing the need for acceptance and companionship, friendship can prevent feelings of loneliness and isolation even in situations where friends influence the adolescent’s level of deviance.

Similarly, in co-ruminating situations, the feeling of intimacy and mutual support may benefit adolescents in the short term, but with a negative counterpart in the longer term. During co-ruminations , friends share their problems and rehash them over and over again in more and more detail. Over time, the fixation on problems is followed by a harmful increase in anxiety and depression.

In these two cases, the benefits of satisfying a short-term social need are associated with the risk of adopting habits that are ill-suited to contact with one’s friends.

In conclusion, teenagers give a lot of value and time to their friends who play a determining role in their development. However, the careful involvement of parents is still relevant in this context. The warm support and involvement of parents in problem solving contributes in particular to the emergence of fulfilling friendships for their adolescents.