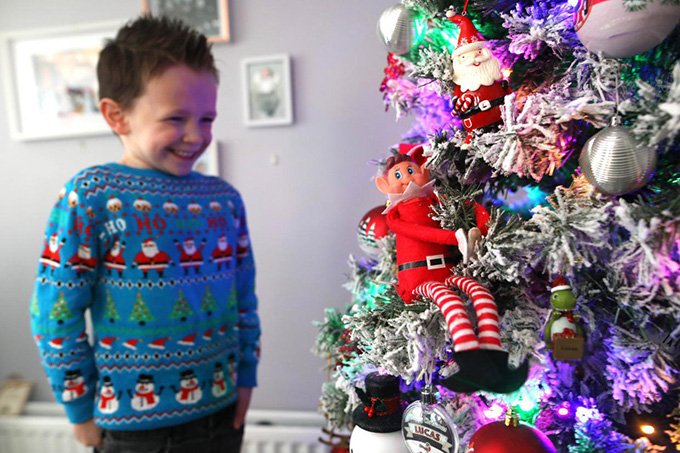 We all lie to our kids. Some lies – telling them their artwork is wonderful, or that Wiggles band-aids are infused with anaesthetic – benefit the child. Others are just a bit of fun.

Take the Tiktok trend of telling your kids this weird little gnome is a picture of them as a baby:

Lily said this was the “best day of her whole life!” 😭❤️🎄

Or cutting off bits of their hair and pretending it was a naughty elf-on-a-shelf.

Playing tricks on our kids can be a bit of fun for them as well as us, but there are a few golden rules to make sure everyone enjoys the prank.

First, do kids ‘get’ pranks?

From a cognitive point of view, a prank firstly involves an attempt to implant a false belief in the mind of another. For example, I’m about to safely sit on a chair. Then it involves a surprising upending of that belief to reveal a different and typically silly scenario: as I sit, I realise a whoopee cushion has been put on my chair.

Implanting a false belief, or lying, requires a well-developed “theory of mind”. Theory of mind is the ability to understand other people have a different mental state and perspective to your own. You understand the other person is not expecting to sit on a whoopee cushion, and you believe the fart sound it makes will cause a funny surprise to them and those around them.

Children’s brains are undergoing an extraordinary metamorphosis as they grow, with some predictable stages along the way.

Most kids develop a recognisable theory of mind around ages three to four. Parents may notice their child suddenly realises they need to actually communicate their needs (as opposed to chucking tantrums because they’re angry you’re not responding to what they want). This frustration helps to push along the development of theory of mind, language and other social communication skills.

Around four to five years, kids may start to tell lies themselves (albeit badly) and experiment with tricks or pranks of their own as they take their newly formed theory of mind for a spin. So kids over the age of four or five should be able to understand a prank, if you’ve witnessed this change in their theory of mind capacity.

Prior to about the age of 12 when their frontal lobe kicks in, children lack the capacity for critical reasoning.

They are yet to be able to analyse multiple options, assess credibility or reliability and make a reasoned decision. This leaves them quite gullible, relying almost completely on what their parents or trusted carers tell them. So between four and 12, kids are ripe to be pranked and may even pull a few of their own.

Can pranks damage trust? Or might they teach something?

A good prank requires a well-developed theory of mind and a thorough understanding of the mind in which you intend to implant the false belief. You have to know precisely what is required to ensure this specific person will fall for your trick, and how to mask your true intentions every step of the way. You also need to be confident they will respond positively.

In this context, pranking done well can be a sophisticated social interaction and you can both equally get a laugh out of it. It can assist with development of theory of mind and humour and even improve the bond between like-minded people.

Most children don’t bear grudges once Santa and the tooth-fairy are outed. As their brains and understanding grow, so does their empathy and ability to see multiple intentions.

By the time children are around 12, the age of reason will be upon them and they will slowly lose interest in supernatural stories and pretend play, as their understanding of reality improves.

Their mature theory of mind makes it easier to realise their parents were trying to make their life a little bit more fun and magical as a child, and most will go on to do the same for their own kids.

So if pranks are done with humour in mind, most children will be able to see this intention and won’t have feelings of mistrust towards their parents. In other words, they’re probably not going to think “they lied about the whoopee cushion, what else are they lying about?”

Things to bear in mind when pranking kids

Pranking can spectacularly backfire, especially if the intention is to humiliate the prankee. Many downright nasty and malicious tricks that have no other purpose are sometimes excused as a prank. If this happens, ask the pranker a simple question: “what about this was funny to me? Break it down and explain it to me”.

Should you accidentally cause someone hurt by a poorly targeted prank, it may be wise to hone another social skill: a genuine apology.

Author Bio:Rachael Sharman is a Senior Lecturer in Psychology at the University of the Sunshine Coast