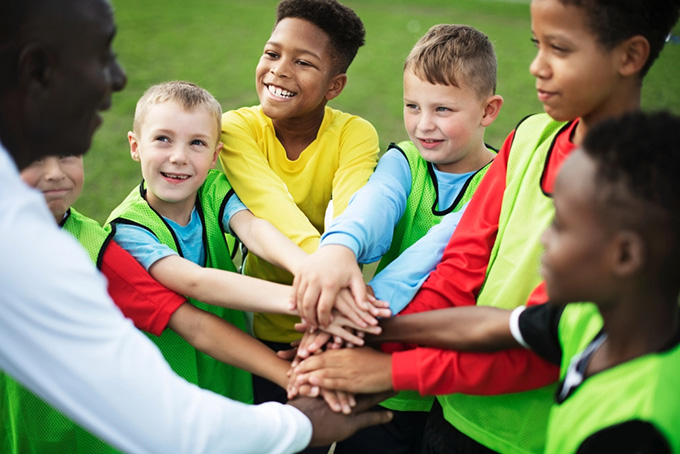 Behind the expression of young people said to be “in difficulty”, there are multiple profiles of people aged 14 to 18, associated with different categorisations: in revolt, in the process of integration, in danger of exclusion, in social distress… These young people live in so-called “disadvantaged” neighborhoods where the rates of precariousness, school failure, juvenile delinquency and unemployment are higher than in other neighborhoods.

In these places, many actions based on sports practices have been implemented, in particular within the framework of city policies, and they are presented as factors of social cohesion, which would make it possible to attract young people and to “re-socialize” them, to reintegrate them.

This invites us to dwell on the apologetic discourse that surrounds sport, this playful, regulated and consensual object. Whatever the era, these discourses are numerous and are based on the supposed values ​​of sports practice: respect for others, respect for the rules, solidarity, surpassing and self-control mainly. But does getting involved in a sport really lead to an appropriation of these values? Or, on the contrary, can’t this also promote the learning of a certain number of transgressive behaviors?

When it is mobilized in the social sphere, sport is presented by the actors of the sports movement and many politicians as capable of developing various skills, and bearer of its own virtues. Team sports, football for example, would improve interpersonal relationships. Body control would make it possible to balance the personality: to know and manage the effort, to channel the aggressiveness and to control its impulses, to become aware of the possibilities of its body as well on the instrumental level as functional.

In this context, the body would be used wisely, the practice being governed by a logic of goal transfer. Sports play can only take place in a standardized environment; if the young person does not respect the rules, the activity cannot exist. Learning the rules of the game would allow the “re-socialization” of young people and sport is presented as the school of life. References to Baron Pierre de Coubertin , advocating this gratuitous effort, dominate even if various research works question these beliefs .

However, many studies in moral psychology applied to sport have shown that the reality is more complex on the playground and that the end often justifies the means as soon as there is competition in an institutionalized framework. Thus functional attitudes develop with regard to the rules which would then be apprehended as constraints to be mastered, or even diverted, in order to derive advantages from them, more than as standards to be respected.

If the logic of competitive gaming is geared towards efficiency in terms of performance and victory, cheating would be part of the game. Transgressive behavior is thus judged as legitimate. When there is a referee or a person who plays this role, in football for example, practitioners also invoke them to justify certain faults which would be a means of doing themselves justice and would make it possible to restore a situation perceived as unfair.

In addition, the perception of the group climate plays an essential role in the appropriation or not of the values ​​promoted. The moral atmosphere corresponds to the collective norms concerning the moral behavior of the members of the group, these norms being considered as being as important as those specific to the individuals. During interactions between group members, an understanding of appropriate behaviors is built. These operating standards, shared by all members, allow them to evaluate behaviors as being appropriate or not in given situations.

The first studies in this field concerned the school and prison environment and showed that, in these contexts, the moral functioning usually adopted by individuals was abandoned in favor of the morality of the group . Many works were subsequently carried out in the sports context , whether at the federal or socio-educational level.

The moral atmosphere of the team , in particular the practitioners’ perception of the permissiveness of their educators and teammates when adopting transgressive behavior or adopting this behavior on the part of teammates towards the opposing group, is a strong predictor of moral functioning (tendency to use this type of behavior or acceptability of the latter)

Research on the perceptions of educators and coaches has also shown the paradoxical nature of the relationship between the learning of moral values ​​and the practice of sport , that is to say between the educational logic and the competitive logic. Depending on the speakers and the situations, the focus will be more on cooperation than on a result.

From egalitarian illusions to meritocracy

However, these various works do not call into question “sporting values”. The logic of the use of sports activities tends to reconcile images relating to youth and those determining the practices in a perspective of education of the person.

The representation results from two converging processes. The practice of sport would allow a restorative effect on the young person and would bring about a change in status by promoting a principle of equality, all practitioners being supposed to be placed in the same conditions on the ground. The second process is based on the belief in the intrinsic virtues of sport, a metaphor for social justice. Initially, young people are presented as having socialization problems; sport by its socializing virtues , would transform the person. This change would allow a new start in life.

Whatever the situations of young people, actions on people are valued. Social problems are thus reduced to individual problems. This psychologization of social problems is revealing of the current context. Social situations are hardly taken into consideration to explain individual behavior. The individual is more implicated than the institutions and he can be considered as the main person responsible for his situation, not being able to adapt to social expectations. Young people in difficulty are thus perceived as responsible for a maladjustment when they are often perfectly adapted to their living conditions, but far removed from the context of overall performance.

The assignment to sport of moral values ​​constitutes an ideal of life, where the top-level athlete would be the figure of the hero. The representations of the meritocratic logic of sport make it possible to reinforce the illusions of egalitarianism in society. However, we are not all equal on a stadium, the most deserving or not will not necessarily be the winners. The use of sport is indicative of our society where competition is the norm. This context of quest for performance leads to individualism and advocates ideals that cannot be achieved by everyone.

Recourse to sporting activities can also be understood within the framework of a process of social control. Sport as a means of socialization for young people in difficulty must be analyzed according to the project constructed by the socialization authority and the associated educational practices. It should be included in a larger youth project. Social diversity is undervalued in the schemes, integration taking place above all in the group to which they belong.

Author Bio: Nathalie Pantaleon is aLecturer, researcher at the Laboratory of Clinical, Cognitive and Social Anthropology and Psychology at Université Côte d’Azur