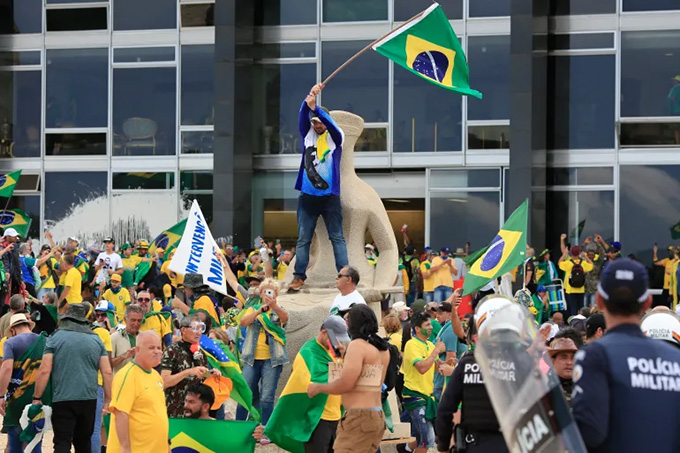 The recent coup attempt in Brazil is a clear reflection of the discredit of democracy. Result of social polarization and populism.

Various organizations warn of the crisis of confidence that democracy is suffering in the world. A recurring threat that requires a forceful response from democratic societies. Since this constitutes the fundamental pillar of coexistence and good governance.

In October 2022, after a very close election, the left-wing candidate Luíz Ignacio Lula da Silva won the majority of votes for the presidency. The difference was less than 2% against his rival, the right-wing candidate and acting president Jair Bolsonaro. The narrow margin and the authorities’ narrative about alleged irregularities in the process led thousands of Bolsonaro’s supporters to ignore the result of the election.

The social mobilizations were encouraged by the then president Bolsonaro. He never openly acknowledged his defeat and argued an alleged electoral fraud orchestrated through the electronic voting system. Making a call to the citizens to mobilize against the election. (https://www.france24.com/es/américa-latina/20221123-bolsonaro-requests-to challenge-in-brazil-the-elections-he-lost-to-lula). The accusations of fraud did not have an international echo, since the process was widely validated by international organizations .

Nor did the attempt to annul the elections in the electoral courts prosper. Neither did the appeal to the military forces not to recognize Lula’s victory . This left as the only alternative that of social mobilization and public protest.

However, at the beginning of the year, hordes of supporters of former President Jair Bolsonaro violently assaulted the headquarters of the constitutional powers. The mob showed contempt for democratic institutions and for the legitimate election process. The assault sought to be the germ of a coup d’état. Had it been achieved, it would have been a huge democratic setback in one of the most populous countries in the world and the main economy in Latin America.

The assault followed almost to the letter the protest and violent takeover of the Capitol in the United States. As Bolsonaro’s supporters attacked Brazil’s democratic institutions, they called for the intervention of the army to overthrow what they considered an illegitimate government. A sad copy of the hostile takeover of the headquarters of the North American Congress two years ago.

The similarities that they share in ideology, the polarizing discourse and the populist profiles of the candidates, show the threat to democracy and its institutions that exists in the Americas. A constant that shakes the region affected by populism and regimes that lean more and more towards authoritarianism. The democratic setback is unquestionable.

Democracy is at risk with the galloping expansion of authoritarianism worldwide. Research from the V-Dem Institute at the University of Gothengurg highlights the steep decline of democratic governments around the world in recent years . The study indicates that in a decade the nations under the rule of autocratic individuals or groups increased from 49% (2011) to 70% (2021). The disturbing trend spans multiple regions of the globe and confirms the advance of new forms of authoritarianism.

The Democracy Index of The Economist magazine , one of the most influential globally due to its methodology and indicators, warns of the same emergency. In this ranking, the countries classified as “full democracies” are increasingly decreasing, which move in the table towards the end of “authoritarian government.” The trend is clearly worrisome, even affecting European democracies such as Spain, which was downgraded to “weak democracy” in the last edition .

Democracy today is in decline and faces the threat of the expansion of authoritarianism. That is why the international repudiation of what happened is essential to work collectively to restore the progress of liberal democracy. Fortunately, the anti-democratic assault in Brazil has unleashed an international wave condemning the event.

From the rejection by the three North American leaders at the Mexico summit, to multiple heads of state in Europe and Asia. Due to its geopolitical importance, the presidents of China or Russia, strategic allies of the South American giant, have also expressed their repudiation. However, it is necessary to move from rejection to coordinated action.

The coup attempt in Brazil is a reflection of the political polarization, the populist discourse and the authoritarianism that threatens democratic systems in the world. It is necessary to value once again the importance of democracy as the only acceptable system for the full development of nations. The fight for democracy must be permanent.