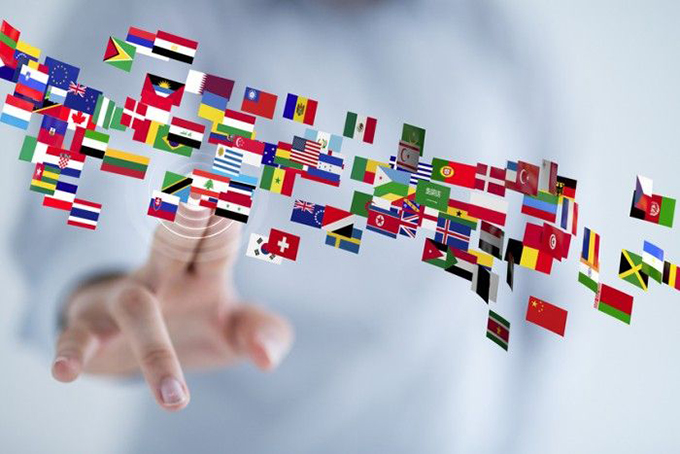 From Duolingo to Babbel , via Busuu or Qioz , there are countless applications for learning languages ​​on the Internet, at home, on your computer, or on your laptop, between two metro stations. Along with teaching programming, this is undoubtedly one of the most promising areas in the field of online education.

The players that dominate the market each have their own brand. Duolingo, which leads the race in terms of audience with several hundreds of millions of accounts created, specializes in simple exercises, such as hole texts or multiple choice questions, aimed at assimilating basic vocabulary.

Other applications have a more assertive social dimension. This is the case of Busuu, which links the users of the site and encourages them to start a conversation on specific topics. In a way, they have to improvise guardians for each other. As for Qioz, a French actor, he plays the learning card more with the series.

Even grandes écoles and universities are now part of it, through MOOCs, these free online courses offered on platforms like Fun or Coursera. In their offer, the language MOOCs are the ones with the largest audiences.

They sometimes reached half a million subscribers, and exceeded 100,000 users for certain French as a foreign language courses, a record. By way of comparison, the average number of registrants for French MOOCs generally fluctuated between 5,000 and 10,000 during their golden years.

From this popularity and this diversity of approaches, can we conclude that language learning has become more democratic? The situation is naturally not as simple, as the work of researchers who have studied the functioning of these sites shows. The potential offered by digital is certainly explored, but remains under-exploited.

The limits of classic applications

The assessments of specialized applications in multiple response questionnaires, the type of Duolingo regularly link the superficiality of learning undertaken through this. In other words, the application allows a first initiation, but as soon as one is interested in the effective mastery of grammar rules, conjugation, or in-depth knowledge of idiomatic expressions, one cannot be content with it.

In the case of communication-centric applications , such as Busuu, efficiency remains limited there too. Written conversations between users are difficult to make fruitful for millions of people in a fully automated way.

There remains a major challenge, which constitutes one of the old promises of artificial intelligence and also undoubtedly an El Dorado for learning languages: being able to recommend to users exercises adapted to their level, in order to create paths for them. measured.

For the time being, personalization often stops again with the establishment of a spaced repetition . To optimize vocabulary review and encourage long-term memorization, the same word will come up at regular intervals in the questions proposed, depending on the learner’s right and wrong answers. Many applications, from Babbel to the Voltaire project, use this process, using the term memory anchoring to describe it.

But spaced repetition does not mean adaptation to the level of the learner, and applications generally do one or the other. Even if some researchers have considered combining the two, the industrialization of these approaches is long overdue, mainstream applications confining themselves at best to small recommendation algorithms.

Lingvist or Duolingo, for example, have started to personalize the exercise sequences based on a diagnosis of the learner’s level, offering exercises corresponding to this level. However, progress remains in many respects embryonic. This is probably due to the fact that these companies are specialized in online learning on the Internet, more than in AI.

What about companies specializing in AI? Given the colossal market it represents, they have looked into language learning. Their plans, however, have not yet had the expected success, as illustrated by Knewton’s failure . Boosted by tens of millions of dollars in venture capitalists, this New York start-up had positioned itself on the niche by producing content in languages, instead of contracting with school or extracurricular publishers.

However, the company went on with disappointments and ended up being bought for the unfortunate sum of $ 17 million by publisher Wiley – a sum to compare with the hundreds of millions invested. Where the West has failed, Asia may be successful.

The Middle Kingdom has also launched itself into the race for educational AI, and companies like SquirrelAI are hiring the leading American experts in the field to develop applications for the Chinese market at the moment. If they continue to grow, open up to the world, and one day push to the end the approach followed briefly by Knewton, they could change the landscape of online language learning. An actor to watch therefore …

Inexpensive solutions that hold promise in terms of personalization, while satisfying the expectations of a demanding public, are therefore always pending. We are at the point where some academics passionate about languages ​​and educational technology, and I am one of them, say that one is never better served than by oneself.

Ten years ago, with a few friends, we tried to fill the gaps in the ecosystem by producing “Duolingo-style” applications, but with richer content and an efficient recommendation algorithm. We encountered the challenge of leading technological developments and producing linguistic content.

The failure then made us wonder if it was appropriate to start from scratch, given the fact that many sites produce free license content that can be adapted inexpensively for such applications.

On the technological level, open source tools are multiplying in the field of educational AI, raising the hope that one day, we will be able to mobilize this type of approach without having to inject millions into the code. From blog posts in webinars we carry the following question: Is it now possible to tinker inexpensively better applications and more ambitious than the current applications by combining the latest technologies with copyright free content  ?

The AIs at hand have made huge strides in recent times. It would be a shame not to explore the horizon of possibilities any further. It is not a question of competing with the giants of language learning – the public service does not have the means, and it is not the job of the laboratories. However, if we could reach a critical size sufficient to generate debate, inspire start-ups, and perhaps break the status quo, it will already be a small victory in itself. Case to follow.

Author Bio: Matthieu Cisel is a Lecturer at CRI, contract research professor at CY University at the Center for Interdisciplinary Research (CRI)