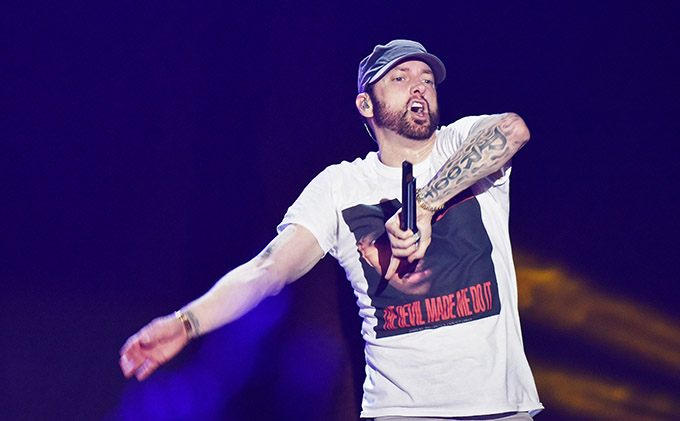 When seeking potential sources of inspiration for crafting the limitations section in your discussion chapter, the rapper Eminem is unlikely to come to mind. But after a guest speaker at RMIT University’s Professional Writing and Editing course recommended watching Eminem’s film 8 Mile for its insights into waxing lyrical about your work, I’m inclined to think that this controversial 2000s pop icon has some wise words to offer scholarly writers.

In the final scene of the film, Eminem stands on stage, ready to demonstrate his linguistically-savvy swordsmanship in a battle-rap. He is fronted by a crowd of adversaries, all of whom are ready to take him down, because he represents a member of an out-group, not yet worthy of respect. He hasn’t paid his dues. As a PhD student seeking to join the ranks of faculty… does this sound familiar?

Eminen’s epiphany: he won’t rise up to take the crown (or in the case of PhD graduation: a velvet chapeau ala Harry Potter’s sorting hat) through intimidating his opponent, or from degrading his competition. He’ll win-over his audience from acknowledging his failings. All of them.

As revealed in his lyrics from Lose Yourself, the theme song from the movie (bolded and italicised below)…

“If you had one shot, or one opportunity to seize everything you ever wanted, in one moment, would you capture it, or just let it slip?”

Your discussion chapter is your ‘one shot’, your ‘one opportunity’ to convince your reader that you’ve made a significant contribution to academic scholarship – the cornerstone of a PhD.

“On the surface [you] look calm and ready…”

Hardly! By the time I got to the discussion chapter I was less assured of my academic abilities than when I first enrolled. The PhD journey can be a shortcut to insecurity, in part, because you realise the limitations of your knowledge. This can result in feeling paralysed to write even a single sentence for fear of a scholar waiting in the wings demanding that you justify your position, or questioning the credibility of your cited literature. I’ve met plumbers with more conviction than professors!

What I didn’t understand about my discussion chapter was that there is a formula. Of sorts. Not the ‘paint by numbers’ rigidity that’s commonly seen in a methods chapter, but a structure nonetheless. One option is to restate each research question, then answer that question in reference to what you found in your data, and then link your findings back to the literature you cited at the beginning of your thesis. Did what you find support or refute what was said in the literature? Why? A response is required for each research question.

Following this, do an ‘8 Mile’. Offer up all the reasons why your findings are not as strong as you might have hoped. In his battle-rap, Eminem tells his adversary all the reasons why he’s not perfect. Didn’t like my sampling technique? No problem. I’ve told you everything that was wrong with it. Disarmed. Didn’t like that I interviewed 22 people once rather than 10 people twice? No problem. I’ve told you why I took that approach (backed up with examples from published studies where the approach I took was also used). Disarmed.

Pre-emptively disarm your audience and they will react like Eminem’s competitor: they’ll walk off stage without a comeback.

The discussion chapter is wrapped in the weight of needing to justify why you’ve spent the last few years of your life sitting in that PhD office, potentially drawing a stipend and sacrificing alternative income streams in the pursuit of two letters before your name and three letters after.

The discussion chapter is most often the last chapter you write. Your candidature clock is ticking and you’re most likely ‘slightly over’ being a PhD student.

I remember begging my (very patient) supervisor… “just tell me what changes you want and I will make them”. She calmly reassured me I would get there. After several re-writes (and her very helpful guidance) I did. But during the process I was stretched beyond any elasticity coefficient I thought possible.

“Back to the lab again… And these times are so hard, and it’s gettin’ even harder…”

Expect that your supervisor will send your discussion chapter back to you for revisions. Multiple times. Don’t lose heart. You’ll get there. It’s part of the process of learning how to be an academic.

What tips or fears do you have in relation to the discussion chapter? Leave your comments below.

Author Bio: Dr Bronwyn Eager spent nearly a decade running her own creative business before completing a PhD in entrepreneurship and joining the ranks of academia.