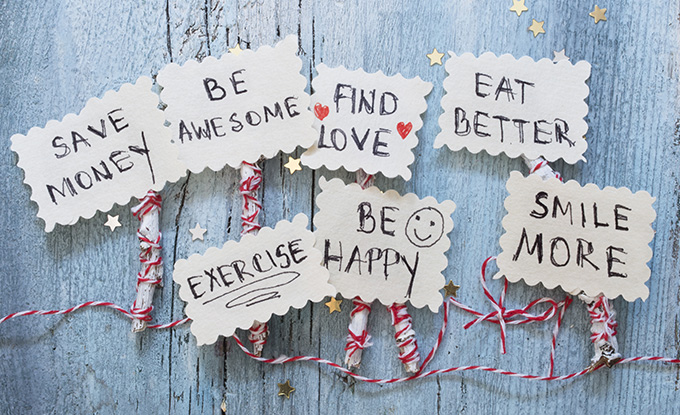 New year, new resolutions. It is that time once again. A recent survey shows that almost 58% of the UK population intended to make a new year’s resolution in 2023, which is approximately 30 million adults. More than a quarter of these resolutions will be about making more money, personal improvement and losing weight.

But will we succeed? Sadly, a survey of over 800 million activities by the app Strava, which tracks people’s physical exercise, predicts most of these resolutions will be abandoned by January 19.

One of the main reasons why promises fail before the end of January is because they are vague. They focus on immeasurable qualities such as being healthier, happier (without defining what that means) or earning more money (without coming up with an amount or plan).

Vague goals do not provide us with sufficient direction. If we do not know exactly where we are going, it is difficult to know which path to take. It is impossible to know how far we have to go to reach our destination, what barriers we will have to overcome and how to prepare for them.

We also often set ourselves unattainable goals because we want to challenge ourselves. There is an inherent paradox – dubbed the “effort paradox” – in how much our brains love the idea of effort while in reality finding it uncomfortable. We want to think that we will feel more fulfilled if we challenge ourselves to achieve a difficult goal.

Another reason for this is that we experience a disconnect from our future selves – we are biased towards the present. That means we find it difficult to imagine the kind of difficulties our future selves will face in trying to achieve these resolutions.

We think of the end point that we want now, in the present, but not the process or journey to get there. With such a narrow focus, it is easy to visualise this end point as closer than what it is when we start working towards it.

To navigate the world, we form mental shortcuts – creating habits. When these cognitive shortcuts have been hardwired in place, our brains find it easier to act without much conscious effort or control. The longer we have had these habits, the more deeply entrenched the cognitive shortcuts behind them are.

For example, we may unthinkingly reach for the jar of biscuits when we park ourselves in front of the telly at night – it becomes a routine. Or we hit the snooze button when the alarm goes off in the morning.

Our brains are lazy and want to minimise cognitive load – meaning we repeat what we find pleasurable rather than consider many different and new options, which may be more or less pleasurable. It is simply easier to take these shortcuts that don’t offer much resistance or discomfort. That said, some people rely more on habits than others and they may find it harder to break them.

To achieve our resolutions, however, we often need to change these deep-seated habits and alter the neural pathways responsible. But as our brains resist this discomfort, we are tempted to go back to a more comfortable place. That’s a reason why we give up our resolutions. An aspect of this is known as the status quo bias. We are more likely to stay with status quo – our existing mindsets – rather than persist with changing these habits which takes time and effort.

When we engage in habitual behaviour, areas at the back of the brain, to do with automatic behaviour, are typically engaged. But to actively alter our neural pathways away from such activation, we need to engage several areas of the brain – including the prefrontal cortex, which is involved in highly complex cognitive tasks.

A study using neuro-imaging revealed that altering our behaviour involves coordinated cross-talk between several brain regions, including speedy communication between two specific zones within the prefrontal cortex and another nearby structure called the frontal eye field, an area involved in controlling eye movements and visual awareness.

This is hugely more cognitively taxing for our brain, and so we try to avoid it.

Changing habits requires being aware of the patterns of behaviour that we have learnt over the years and knowing how difficult it is to change them. And that’s impossible if you are blinded by visions of the new, perfect you. But to succeed at changing yourself, you need to know the real you.

It is also helpful to set clear, achievable goals – such as devoting an extra hour a week to your favourite hobby or banning biscuits in the evenings only, perhaps replacing them with a nice, herbal tea.

What’s more, we need to appreciate and celebrate the process of achieving our goals. Many of us are more inclined to focus on the negative aspects of the experience, leading to stress and anxiety. But bad emotions demand more attention – this is called negativity bias. And the more we focus on negative things in our lives, and the negative aspects about ourselves, the more we are likely we are to feel down while missing the positive things.

The more we focus on the positive aspects of ourselves, the more likely we are to be able to change our mindsets.

So if you want to change, accept yourself the way you are – and understand why. Though if you do that, you may even find you’d rather stick to the motto “new year, same old me”. There’s nothing wrong with that.

Author Bio: Pragya Agarwal is a Visiting Professor of Social Inequities and Injustice at Loughborough University