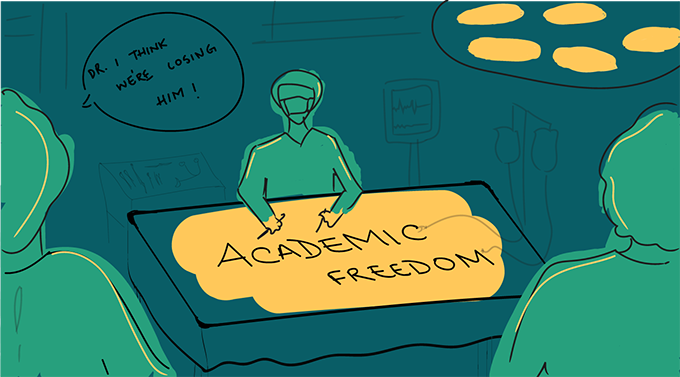 Some time ago, a professor made a blog post, chastising a teacher for shutting down a student who advocated for, well, traditional marriage. Arguing for heterosexual marriage is a faux pas on campus today, and the school formed a committee to investigate this “inappropriate” behavior.

A few posts on a blog. Seven members on the committee. How much did it take to come to a conclusion?

Four days of hearings! Months of deliberations! A hundred and twenty three page report…over some blog posts. You better believe the committee was being browbeaten, and kudos to them for holding on to their integrity.

–Well, holding onto their integrity for a few months, anyway.

Now, I do feel the professor made a big mistake here, in that he named the teacher of the course. Our current world is flat out nuts, and while shutting down discussion of the value of traditional marriage is politically correct these days…it’s possible that will change. Because we now live in a world where a “mistake” made years before can destroy you, naming that teacher can negatively impact her career years from now. Put yourself in the teacher’s shoes here: if she allowed open discussion of possible benefits to traditional marriage, she could have been hauled into the Diversity Palace for re-education. It’s a no win situation on campus for this stuff.

He should apologize for that, at least. That’s my opinion, and it didn’t take over a hundred pages of explanation, multiple hearings, and months of consideration.

Anyway, based on the committee’s “fair and balanced” ruling (and I assure the reader, taking that level of effort is a huge flag that the committee was, eventually, corrupted), they suspended the professor, and tried to force a full apology from him for advocating for traditional marriage.

He won’t do it. He maintains that he shouldn’t be punished for following the mission of his Jesuit school. Thing is, like most schools, it’s been taken over by a wandering band of plunderers who care nothing for the school’s mission:

“As for so-called Catholic universities, first you have to understand that Jesuits are thin on the ground these days,” McAdams continued. “The president of Marquette’s not a Jesuit, the provost isn’t, the dean of arts and sciences isn’t… there are so few Jesuits that so-called Jesuit institutions pretty much aren’t run by Jesuits.”

As always, the school believes they were perfectly correct in punishment. The professor could appeal the school’s ruling…but this would lead to the school forming another loaded committee and browbeating that committee as well.

Instead of wasting time in a thoroughly corrupt system, the professor took his case to the Wisconsin supreme court, claiming, quite reasonably, that his contract does allow him freedom from expression without such punishments as “permanent unpaid suspension”—he’s tenured, so he can’t, technically be fired, but such distinctions are meager next to being not being paid or allowed to do any work.

They ruled the university will need to give the professor over 3 years of back pay. I feel the need to mention these sorts of abuses go on by schools on a fairly regular basis…most professors just suck it up, because they can’t afford to go that many years without a paycheck. I also point out that this is all tenure means: they can’t fire him, but they don’t need to pay him, either.

“The undisputed facts show that the University breached its contract with Dr. McAdams when it suspended him for engaging in activity protected by the contract’s guarantee of academic freedom,” said the majority opinion written by Justice Daniel Kelly.

The article I’ve linked actually spends most of its time covering how the professor is wrong in his beliefs (it’s fascinating how much slant is here), but I include the “money shot” above.

The school, amazingly enough, is unrepentant despite the court ruling against them:

“At Marquette University, we are proud that we have taken a stand for our students, our values and our Catholic, Jesuit mission,” it said.
“Marquette will comply with the terms of this decision, and it does not change the university’s commitment to the safety and well-being of our students.”
The statement concluded:
“This case has always been about Associate Professor John McAdams’ conduct toward a student teacher. The professor used his personal blog to mock a student teacher, intentionally exposing her name and contact information to a hostile audience that sent her vile and threatening messages.”

I’d warn the professor that his days are clearly numbered, but he’s 72, so I suppose he’ll be satisfied with winning on principles here. Still, this will be something of a pyrrhic victory for free speech:

The university says it ultimately wants to ensure “those whom it invests with the responsibility and privilege of teaching its students abide by its governing principles.”

The gentle reader should understand the above to mean that future contracts will give the university broad leeway to punish faculty who deviate from the narrative, in this case, dare to advance the notion that heterosexual marriage might not be a bad thing.

So, let’s summarize here everything that happened, and the fallout:

First, a professor makes some blog posts advocating for a belief system consistent with his institution, and makes the mistake of naming one person who shut down classroom discussion of an aspect of those beliefs.

Second, the university uses their corrupt system to punish the professor, beyond all interpretation of reasonable justice.

Third, the professor takes his case to a less corrupt system, and overturns the ruling based on written contract law. This is touted as a win for freedom of speech, and academic freedom.

Fourth, the university changes future contracts so they can disallow future free speech and shut down future academic freedom. There’s nothing anyone can do to stop this.

Finally, the university will spend a fortune on a new fiefdom, filled with Vice Presidents of Shutting Down Freedom, which in turn will come up with ways to fix the old contracts so they can retroactively shut down academic freedom as well. There’s nothing anyone can do to stop this, either.

So, yes, enjoy your minor victory professor, you’ve earned it. I maintain the system is too corrupted at this point to allow for anything better, and that things will only become worse on this campus, just as they are on many others.