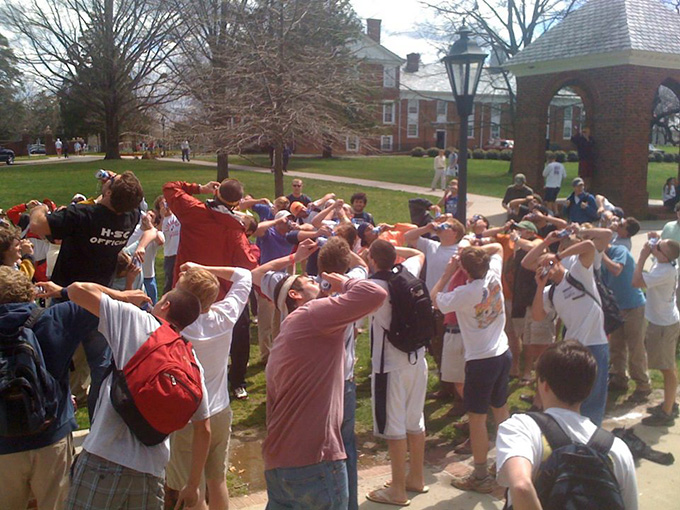 The culture of fear in academia that I wrote about last year is unchanged. You must watch what you say, even watch what you blog, and forever look over your shoulder. The most unforgiveable crime is to say anything remotely critical of our prevailing government ideology of liberal progressivism.

Our state schools are consumed with protecting this ideology, but as state schools, they’re pretty much obligated the follow the party line of whoever is signing the most checks. Unfortunately, it’s not just our state schools that squelch any dissent, other colleges likewise come down hard on anything that could be interpreted as wrong think.

Hampden-Sydney college is a males-only college in Virginia, founded in 1775. One would think it would have a system in place to give its around 2,000 students a fair chance at an education, which must include exposure to ideas other than “whatever the Poo Bah says, goes.”

Alas, the annihilation of tenure has turned many of our campuses into sycophantocracies, where spinelessness is rewarded, and even the slightest hint of independent thinking must be annihilated at all costs.

Lt. Gen (ret) William Boykin was one of their esteemed professors, with an impressive resume that included being former commander of the elite Delta Force…this is obviously a “get things done” person who doesn’t waste time on politically correct stupidity.

And, unfortunately, this was not a man easily cowed by higher education’s culture of fear. He dared to speak out even a little against the transgenders-in-the-bathroom issue which has been distracting our country from vastly more relevant realities:

“…the first man who goes in the restroom with my daughter will not have to worry about surgery.”

I’m not one to advocate violence, but I think it’s fair to respect a father being protective of his daughter. It’s just one line, the kind of bravado one would expect (demand?) from a military man, and if our campuses were run by reasonably intelligent people, his words would have been met with all the anguish as the news that librarians keep their books at home organized, or that the accounting professors are meticulous with their personal checkbooks.

Because some of you already know and are contacting me about it, let me make it official and let you all know that I have been terminated from teaching at Hampden-Sydney College after nine years there.

Wow, nine years down the drain…for showing protectiveness of his daughter. This really is why spinelessness is the most important personality trait for faculty, and I know my own long term prospects in higher education are grim.

As a men’s college, Hampden-Sydney is a bit of an anachronism, and I suspect their days are numbered; it’s a just a matter of time until a Poo Bah comes by and plunders it. Small colleges are in a bind right now; the student base is falling, and they’re very hard pressed to compete with the massive tax breaks that public community colleges get.

This was such an opportunity for Hampden-Sydney to stand out from the pack. They could have used this outspoken, manly, military commander as an icon for the school, as being a school that stands for “old school” values that, bottom line, worked out very well for Western (and, frankly, most other) cultures for a few thousand years.

I’ve nothing against transgenders, they’ve a hard enough road to follow without me adding an obstacle to it…but simply wanting to be protective of our children is a problem now?

The fired faculty tried to clarify his statement, but to no avail:

“I was referring to perverts who will use these policies to get into locker rooms with girls and women, and I object to that,” he stressed. “Nonetheless, I gave the LGBT community just what they needed to pressure the college leadership to terminate me and they did.”

Back when tenure was a common thing, it took around 7 years of scholarship to get it. Now, 9 years still grants no protections from the whims of the administrative caste, which only cares about padding their own bank accounts.

I’m not convinced the professor did anything wrong, and it takes some mental gymnastics to perceive his words as a legitimate threat. Seeing as there was no harm done, it really seems like a termination is overkill.

Wasn’t there a time when an apology was good enough? Nowadays the Social Justice Warriors can only be satiated with blood, and plenty of it. I understand the “leadership” of the college is frightened of Social Justice Warriors, I even find it to some extent understandable but…the SJWs are wildly out of control now. With so little to lose, the “leadership” of the college should have taken a stand, instead of caving in like, well, every other college.

Hampden-Sydney College did not immediately respond to Breitbart News’ request for comment.

Such cowardice, they can’t even own up to their shameless pandering to the SJWs. There are still some faculty that will at least try to stand up to the madness gripping our campuses, but, as the gentle reader can see, such resistance is futile.

Tags: culture of fear i