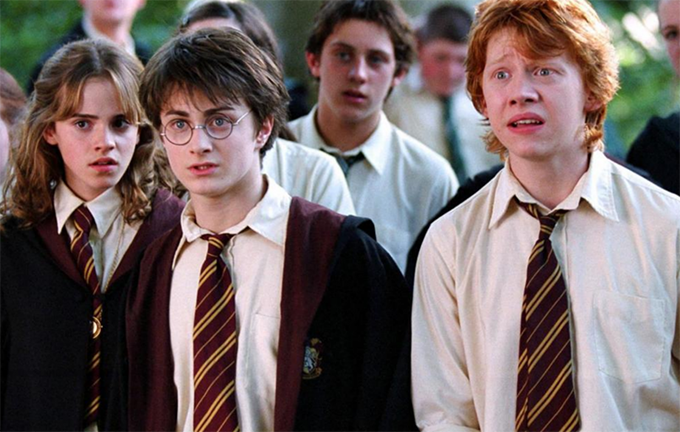 “All the children of our world will know his name,” prophesies Professor McGonagall at the beginning of Harry Potter . More than 20 years after the appearance in bookstore of the hero imagined by JK Rowling, it is clear that fiction has become reality. The series in seven volumes that traces the path of initiation of the young orphan was published more than 500 million copies, and popularized by his adaptations to the cinema.

But by turning the pages of this must-read in the youth literature, budding readers are not content to distract themselves. The series is full of references to classical authors, ancient myths and great epics. While exploring with Harry Potter the mysteries of Hogwarts, the children also make a small trip to the world library, which can also open new avenues for them to read. Here are some examples.

Harry Potter is full of references to Greek antiquity, especially in the choice of names of characters. Just by flipping through Homer ‘s Odyssey , which is a sixth – grade book, young readers can spot names already encountered in Harry’ s adventures. For example, Artemis, the name of the goddess of the hunt, is also the middle name of Norbert Dragonneau.

Athena, goddess of wisdom, is present with her Roman name, Minerva, name of Professor McGonagall. The figure of the prophetess Cassandra is evoked as the great-great-grandmother of Sibylle Trelawney, divination teacher. Hermes (messenger god) is the name of the owl of Percy Weasley and the base of the name “Hermione”.

As for Olympus, the mountain where the gods live, it reappears through the director of the Beauxbatons school, Olympe Maxime; it is an allusion to its size since it is a half-giant!

The Epic of Gilgamesh , the oldest fictional text found on the planet, is an anonymous work dating back to around 3000 BC . The text focuses on Gilgamesh, king of Uruk, who goes in search of immortality after the death of his friend Enkidu.

This refusal of his own human condition has influenced many texts of our civilization and is one of the leitmotivs of the dangerous Voldemort in the Harry Potter series . Following the revelations about his mother’s disappearance, Tom Riddle (Voldemort’s birth name in Jean-François Ménard’s translation), sets out to pursue immortality.

Enkidu and Merope Gaunt (Voldemort’s mother) play the same catalytic role that propels Gilgamesh and Voldemort into their quest. In both cases, this quest fails because immortality remains inaccessible.

The Epic of Gilgamesh is published in youth and adult version .

JK Rowling was inspired by Ovid’s Metamorphoses , as much to name her characters as her magical creatures. Draco Malfoy’s mother, Narcissa, a more prominent figure from the fourth volume, refers directly to the myth of Narcissus in The Metamorphoses. She is haughty and vain, just like Narcissus, who falls in love with his own image reflected in the water of a spring.

Filch, the janitor at Hogwarts, has the same name as Argus, giant “head encircled a hundred eyes” (Book I, translation of Joseph Chamonard ), constantly awake.

As far as magical creatures are concerned, Fluffy, Hagrid’s three-headed dog in Harry Potter at the Sorcerer’s School , is a representation of Cerberus, mentioned in Ovid’s books IV, VII, IX, and XIV, the creature who keeps access to hell. He keeps the entrance to the trapdoor under which many traps protect the philosopher’s stone. Rowling also revives the centaurs of Ovid (II, IX and XII of the Metamorphoses ) with similar roles and attributes.

The second installment in the Harry Potter series features his narrative rewriting Shakespeare’s The Winter’s Tale . This intricate piece narrates the life of the Sicilian royal family composed of Leontes, the king, Hermione, his wife, and their children.

From the beginning of the play, Leontes is seized with a fit of madness; he thinks Hermione is cheating on him with his best friend and that the child she is carrying is not hers. He puts her in prison with her son and as soon as she gives birth to a girl, he exiles her on an island. The son and mother die in prison but Hermione comes back to life at the end of the room when a statue of her comes alive.

Harry Potter and the Chamber of Secrets plays on Hermione’s name since it also passes part of the book away from the story, in the form of a statue, to return to life at the end of the book.

The seventh Harry Potter volume builds another parallel between the two works, that of Ron’s unhealthy jealousy toward Harry and Hermione. Thinking that Hermione prefers Harry, he decides to leave the trio and go home. Just like in The Winter’s Tale , he is seized with violent remorse and manages to surpass his jealousy to join the adventure on the end of the work.

Other more well-known Shakespeare plays also come back at various times in Harry Potter . The prophecy that is at the heart of books five, six and seven of the series is inspired directly from Macbeth . The Bizarr ‘Sisters, the magic music band, has the same name in English (Weird Sisters) as the group of witches in Macbeth and looks like them physically. Their incantation is also repeated in the third film Harry Potter and the prisoner of Azkaban as a song of the school.

Bellatrix Lestrange also has strong resemblances to Lady Macbeth, especially when she explains at the beginning of the seventh volume that she would be willing to sacrifice her own children for Voldemort’s cause.

A good knowledge of Harry Potter can therefore make it easier to get into the complex and diverse works of Shakespeare by creating a pre-marked path from already known names and themes will create stepping stones in the path of reading.

Harry Potter and the Goblet of Fire opens on a very special chapter where the story of the Riddle family (Voldemort’s family) is narrated. This story is one of mystery: one morning, the maid of the Riddle enters the big living room to find the dead parents and son Riddle. No rational explanation is given to their death except their expression of dread, and the police are caught off guard.

This unusual introduction to a Harry Potter is actually a story of Conan Doyle, The Adventure of the Devil’s Foot , where a family is also found in his living room by a servant (one person died and the other two went crazy) ). The conditions are the same: the family members also look frightened and the police are unable to understand this murder.

Sherlock Holmes’ staging helps to unravel the story, just as Harry Potter’s knowledge of the magical world allows the reader to understand that the Riddle is dead because of a spell cast by Voldemort.

This strong intertextual link is repeated throughout the Harry Potter saga, where Harry, Ron, and Hermione constantly take the detective’s place to elucidate the many mysteries that come their way: what does the Fluffy Dog keep? Who opened the chamber of secrets? Who is the prisoner of Azkaban? Who put Harry’s name in the Goblet of Fire?

All aspects of the detective novel are present in the Harry Potter  : suspects, clues, false clues, the detective’s research work and even interrogations in the latest volumes. Conan Doyle’s lyrics have been included in many youth editions that may allow children to continue the police adventure off the pages of Harry Potter .