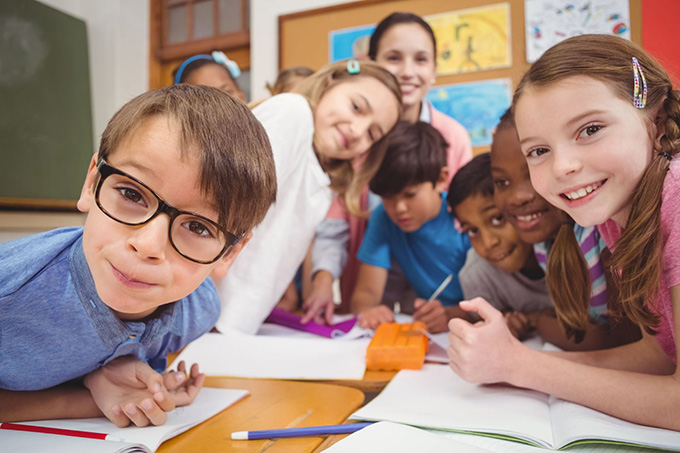 The Declaration of the Rights of the Child will celebrate its centenary in 2024. Faced with the complexity of the crises that face us, the legacy of Eglantyne Jebb, author of the Declaration, and her insistence on the need to place the rights of the he child as a priority on the agenda of the world community must be taken into account more than ever.

How can the voice of children and young people be heard, when they are not considered full citizens until they reach the age of majority? How to include unborn and new generations in decision-making processes, when even the Declaration of the Rights of the Child was drafted and ratified without them?

Children and young people live in a world where crises are multiple and intertwined, on the democratic, economic, health, climatic and environmental levels, with the collapse of biodiversity.

It is disconcerting to think that today’s adults are the only generation that will live longer than their elders and their descendants. And yet this is the perspective outlined by the UNICEF / WHO report , published in the journal The Lancet even before we perceive all the effects of the Covid-19 pandemic…

The health crisis has shown us this forcefully: inequalities in access to education and health have increased during the pandemic; physical, psychological and sexual violence have increased, not to mention the mental health of children and young people which has been put to the test. This is evidenced by the study conducted in ten countries (from the “North” and “South”) approved by the journal The Lancet Planetary Health , which estimates that 75% of young people questioned consider the future “frightening”.

And yet, these young people are committed, in their own way, to moving the lines: evidenced by their involvement on social networks, or in movements such as Fridays for Future . Since many of them do not yet have the right to vote, they express themselves differently, by choosing to question the system in which they operate on societal and environmental issues, by making political leaders face up to their responsibilities .

In school, we were all taught to be good citizens. But when will we give these young people the means to be full citizens, those who are the first concerned by the consequences of the exploitation of our planet?

However, it suffices to reflect on the historical bases of “citizenship” and to question its geographical limits to realize that the concept has in fact never been very inclusive. Admittedly, Athenian citizenship constituted progress in the face of the domination of tyrants. It has allowed access to the arts, to education, to science, to open debate and above all, to democracy.

However, this city had walls which separated the natives from the foreigners, and, among those who lived within these walls, only the individuals capable of defending the city from external threats were eligible for the status of citizen, automatically excluding the slaves, women and children. Beyond these walls, there was Nature, from which one extracted the subsistence intended to nourish the citizen population and to make it prosper.

During the Age of Enlightenment, the notion of citizenship was rethought on a national scale, but it nevertheless remained exclusive of the rights of women, migrants, slaves and young people.

While women are the last to become citizens, the youngest are still not. In the digital age, we can reinvent the legacy of the Enlightenment, in order to make it more inclusive, more ecological and to do so on a planetary scale.

A citizen is therefore one who enjoys the privilege of residing within the walls of the city. Faced with the interdependencies of our contemporary world, is this notion not today unsuitable for resolving the crises of the 21st century  ?

The United Nations High Commissioner for Refugees estimates that there are millions of stateless people around the world, almost a third of whom are children. This phenomenon “is often the result of policies aimed at excluding people considered foreign, notwithstanding their deep ties to a given country”, i.e. people born into the wrong ethnic group in the wrong country. This is a consequence of the notion of citizenship: by nature, it only applies to some and not to all.

It is high time to go beyond the limited field of citizenship to bring out a more universal concept. This notion is “planetizenship” (a term that we will prefer here to that of planetoyenneté which, if it rhymes with citizenship, is not very happy).

With planetizenship, the idea of ​​an out-of-place ethnic group no longer makes sense. By adopting the concept of planetizen, we abandon the idea that the individual deserves rights only in exchange for his commitment to defend his homeland. In fact, we go so far as to forget the very idea of ​​defense and war to move towards a peaceful enterprise based on collective efforts with the aim of feeding the population, improving education and the quality of life. , clean up our ecosystems, promote justice and support biodiversity.

Writing the Planetizens Bill of Rights

The planetizenship would make it possible to imagine a feeling of fraternity and belonging which would apply this time to the entire terrestrial population, plants and animals included. To become planetized or “planetize the movement”, to use the words of Martin Luther King Jr., would be to pool our conception of things, our actions, our rights, our institutions, our objectives and our ability to come to an agreement. about how we should live together on this Earth.

The prospect of founding such a global community can be dizzying, which is why the use of concrete tools is essential to stay anchored.

So why not take inspiration from an educational method? Kiran Bir Sethi, designer, educator, educational reformer, and entrepreneur in the social field imagined the “Feel-Imagine-Do-Share” approach (Feel-Imagine-Do-Share, included in the Bâtisseurs de Possibles approach , French version de design for change) to help schoolchildren develop projects that help their communities.

So let’s adopt this path to set up the planetizenship. First, we sense the existence of a problem. We are uncomfortable with the definition of citizenship as it appears in the history of democracy, something is wrong, we feel it in our hearts, and it is difficult for us to put words. Art, poetry can help us put these emotions on paper.

Then, we imagine a solution: we want to broaden the notion of citizenship to make it more inclusive, open it up like a marquee to shelter everyone, starting with the excluded, migrants, women and children.

Then we have to do something to solve the problem: write the Planetizen Bill of Rights together, using the digital technologies at our disposal.

Finally, we share this declaration and we seek support to encourage world leaders to ratify the Declaration of the Rights of Planetizens.

If the role of adults is crucial in the integration of new generations in the democratic process, and in the transmission of the values ​​of commitment , children and young people must be at the heart of the drafting of the Declaration of the Rights of Planetizens, as they must be able to give their opinion and make their voice heard.

Each planetizen, if he learns in a holistic way to take care of himself, of others and of the planet, must also think about his past, his present and his future and those of our humanity.

Among the Iroquois, a people who traditionally live in North America, taking future generations into account in all decisions is rooted in ancestral foundations. The principle of the “Seven Generations” enjoins the Iroquois chiefs to act on behalf of the living members of the nation, but also of the seven generations to come! The idea behind this principle is that the Iroquois peoples are therefore only borrowing the land from their offspring, who will live seven generations later.

Welsh people today are adopting a similar tendency to think and act on behalf of future generations. Sophie Howe is the current Commissioner for Future Generations for Wales, a position created to ensure that future generations are protected. When citizens around the world like young people in environmental movements lobby decision-makers from the outside, Sophie Howe exerts her influence inside government, closely follows the daily actions of Welsh public bodies and rings the bell. alarm when decisions do not conform to the Sustainable Development Goals set for Wales.

What if we acted as good ancestors for future generations, drawing inspiration from the Iroquois and the Welsh? What if we become planetizens who advocate for the rights of unborn generations, children and young people, who are the last to get the right to vote, and the first to suffer the consequences of a deteriorating planet? What if we “planetized the movement”?

To planetize is to rethink our individual and collective actions while feeling observed by the worried eyes of our exhausted planet.

And you, how would you present yourself or describe yourself in the eyes of the planet? Could you express it in the form of a poem, a humorous video , or a short text? You’ll find my own attempt below, but I’d love to hear about yours.

If you write a poem or a prose text, share it on the social network of your choice with the hashtag #planetizen:
Seen from the eyes of the planet,
If we were a little honest,
We would admit that our balance sheet is not very clear.

If we were awakened by our descendants
Who ask us to explain our balance sheet,
We would have to admit that we have been too slow,
In our awareness,
Despite the results of science.

As a citizen,
Our results are very average,
While we exploit shale gas,
We always elect more fascists.

While some take up arms,
Still more are the tears.
Are we condemned to aggression, exclusion, competition, hyperconsumption, destruction, domination?

If the citizen is the armed man who defends the walls of the city,
is it any wonder that migrants, slaves, women and children do not have easy access to citizenship?
Are we able to understand that these walls separate man from nature,
Which to feed our Cities is today transformed into burial?
May our children learn to cooperate to meet the challenges of our time more than to compete on the knowledge of yesterday.
May poetry help us to come out of our anesthesia.
May we write the sequel together in an exquisite corpse.

And if we finally listened to Martin Luther King who invited us to planetize the movement,
would we be able, in view of our interdependence and our vulnerabilities, to rethink our actions, our ability to live together on the frail interstellar skiff that is our common home? ?
Could we simultaneously cure planetary health and eco-anxiety?

What if we become planetizens?
Would we be inspired by Zen masters,
Able to take care of ourselves, others and the planet?
Would we be able to avoid the tragedy of the commons?
By inventing together another path,
Where we would hold our destiny in our hands!