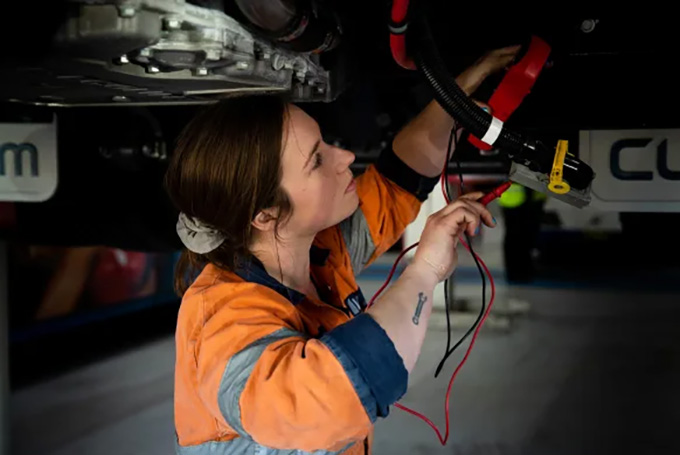 An interior designer turned baker, an ex-banker at the head of his cheese factory, or a marketing manager turned electrician… such professional trajectories, if they remain atypical, are less and less surprising today. On the one hand, professional retraining is normalizing: according to the third Center Inffo/CSA training and employment barometer , 21% of working people were preparing for retraining in January 2022, to which we can add the 26% who declared consider one eventually.

On the other hand, the retraining of Executives or Higher Intellectual Professions (CPIS) towards a craftsmanship are, in particular, the subject of recent highlighting, often from a positive angle. There are thus many portraits of these reconverted people in the press, while some – like Matthew B. Crawford or Arthur Lochmann – report on their experience by linking it to a reflection on the value of work . ” manual “.

However, these reconversions pose a major challenge to the analysis of social mobility, concerned with identifying the determinants of upward mobility, reproduction or social downgrading. The latter can be analyzed on an intergenerational scale , when children reach a relatively lower position in the social hierarchy than that occupied by their parents; but also on an intragenerational scale , corresponding for example to the situation where an individual occupies a professional position for which he proves to be overqualified. In either case, downgrading is seen as a suffered phenomenon. How, then, to account for the reconversion of executives towards crafts?

For individuals who have reached a high professional position or have a high level of qualification, converting to a “manual” craft trade could indeed be seen as a paradoxical “voluntary downgrading”. The question arises of what motivates this atypical professional mobility and of the satisfactions that the reconverted people are likely to experience in their new profession.

As part of our thesis , we conducted interviews with craftsmen with a bac+5 or who had previously held a job as a manager or intellectual profession, in order to better understand the springs of such professional bifurcations.

First of all, the majority of these reconverted men and women show a relationship to work that can be described as “experiential”. This means that, more than material resources or the prestige of professional status, these professionals seek in their activity a satisfying and fulfilling work experience in itself.

The economic dimension, if not totally omitted, takes a back seat all the more easily since the people concerned very often have safety nets. For some, it is unemployment benefits while they retrain, income from a spouse, for others financial assistance from relatives, prior savings or real estate assets.

As Tom points out (first names have been changed), holder of a thesis in physics and working as a carpenter, having “the cultural baggage, the economic baggage” and the security of knowing that “his parents [both researchers] are there constitute the conditions authorizing him to “roam between professions”.

The possibility of returning to a more qualified job in the event of relative failure of retraining, thanks to the diploma or the professional experience acquired in the past, also makes it possible to limit the risks. Under these conditions, reconverted people, wishing to engage in an activity considered to be more fulfilling or more in line with their values, can allow themselves to transgress socio-professional boundaries.

Admittedly, the craft trade corresponds to a social recruitment that is more popular than their milieu of origin. It requires a level of qualification lower than theirs, and generally confers lower or more uncertain incomes. But the experiential relationship to work leads the reconverted to focus less on these criteria than on that of the satisfaction that the activity can provide intrinsically. They very rarely state that they feel downgraded, evaluating their situation on an individual scale and in terms of fulfillment rather than from a perspective that takes into account the socio-professional status associated with their new job.

Giving “meaning” back to your activity

This experiential relationship very often leads reconverted people to indicate that artisanal work would have more “meaning” than their former profession. Gabriel, an account manager who has reoriented himself towards the cheese dairy, sums up what led him to consider that his activity “lacks meaning”:
“Everyday is kind of the same […] and you’re like, ‘Well, am I really going to spend 40 years on a desk, my ass on a chair, staring at a computer, is that is what I really want to do?” »
Not all of the people converted were necessarily working in an “office” job, using a computer. But this type of activity nonetheless constitutes a foil figure, which structures their relationship to “intellectual” work. Several faults are attributed to it: first of all, a sedentary lifestyle, both in relation to being indoors and often sitting down. Next, the feeling of unproductiveness that sometimes arises from “intellectual” work is also mentioned repeatedly. Finally, these “office” jobs often involve a strong division of labor, which can give retrained people the feeling of being a “number”, a “link” or a “cog in a mechanism that (exceeds us)”.


By contrast, craftsmanship is given qualities that mirror these flaws. First of all, it allows you to work outside – which many people who have been converted to construction value – or to mobilize your body. Contrary to studies highlighting the physical vulnerability associated with craftsmanship , reconverted people tend to describe this bodily commitment as something that “feels good”, which “muscles”, which makes you feel “in shape”, “well in his body”, or who avoids “being overweight” or “taking flab”.

Second, craftsmanship is valued for its “concrete” character. It should be understood by this that the product of the activity is palpable, tangible, which makes it easier to equate its efforts and the result they produce. This concreteness contrasts from this point of view with the feeling, in the old profession, of getting lost in “endless meetings”, in “floralities”, in reflections that can last “for hours and hours” on subjects whose ” superficiality”, “artificiality”, “abstraction” or excessive “complexity” are denounced.

Joëlle, a former training manager who became a baker, underlines that she had the impression of “finishing up late […] to do nothing”. She contrasts this activity where, at the end of the month, she had “still earned 5,500 euros”, but without knowing “to whom (she had) brought”, and her new job: “There, every day I feed the less than a hundred people.

Finally, the craft activity very often allows retrained people to supervise all the stages of production, which is valued as opposed to an overly marked division of labour. The challenge lies in the possibility of benefiting from greater autonomy, both technical (mastering all the tasks necessary to produce the product) and organizational (not depending on others to carry out one’s activity).

This concern for professional autonomy can be seen in the very high proportion of retrained people setting up on their own in the very short term, compared to tradespeople. Access to independence emerges, from this point of view, as an essential condition for retraining in the craft trade.

Author Bio:Antoine Dain is a PhD student in Sociology at Aix-Marseille University (AMU)