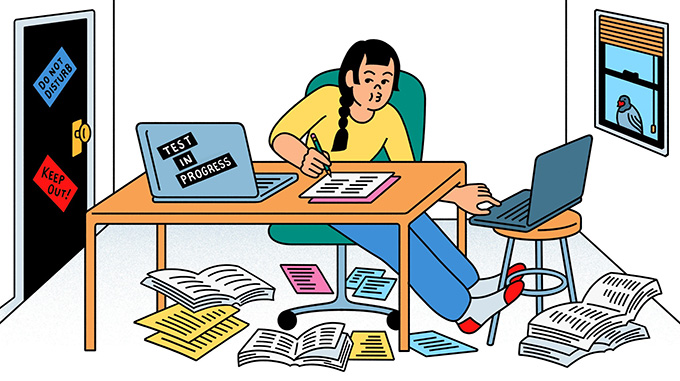 How to ensure students a fair and reliable assessment, guaranteeing the value of their diploma on the job market? In the current conditions of distance education, the issue manifests itself with increased acuity in higher education establishments, bringing the problem of cheating back into the spotlight.

“The establishment of partials remotely poses great difficulties for establishments which fail to neutralize the many cheaters”, according to a survey by Figaro Etudiant published on May 15, under the title “Online exams at university: when cheating is becoming the norm ”.

In fact, cheating during exams is an old phenomenon , generally downplayed by university authorities but readily recognized, even practiced, by many students, some of whom do not hesitate to brag about it. This was already revealed by a report by the General Inspectorate of the Administration of National Education published in July 2007, in a context that was however very different.

“The mission noted a significant difference in perception of the phenomenon depending on whether it questioned the teachers and educational staff (who downplayed it) or the students (who made a disturbing mention of it), as regards traditional fraud in examinations” on table”. “

Of course, cheating is all the easier since the examination aims at a simple restitution of knowledge, through a multiple choice question for example. To fight against cheating, we can therefore go towards more singular subjects which will ask students to be inventive and to gather elements to find and expose a singular solution to a given problem. But even in this case, cheating is not excluded, especially when a third party can assist the candidate in a hidden way.

In the article in Le Figaro Etudiant , students who do not hesitate to give concrete examples of these hidden illicit collaborations, all the easier to implement since we are not in the “face-to-face”, but in a “distance” exam.

But we also had in the past equivalents to that with the phenomenon of the baccalaureate of “versionnaries” or “couriers”, as recounts the Journal of political and literary debates of March 31, 1857:

“The ferryman replaces the candidate, takes his place and his name […] and receives under this name the bachelor’s degree, which he gives to the candidate whose doppelganger he was. In general, the versionary is content to assist the candidate in the written tests […]. To do this, he registers at the same time as the candidate, places himself at his side during the test, then, when the version is made, we exchange the copies. “

One could object that it was not a university examination. But it would be wrong because, until the inter-war period, the baccalaureate was a real entrance exam in higher education, the jury being composed only of academics.

Steps have been taken to try to curb these illegal practices. In 1837, Guizot signed a decree so that the procedures for verifying the identity of candidates were strengthened.

To fight against the organization of fraud, the law of December 23, 1901 indicates that “any fraud committed in the examinations and the public competitions which have for object the acquisition of a diploma delivered by the State constitutes an offense”, and the penalties provided range from one month to three years’ imprisonment and from 100 francs to 10,000 francs (gold) in fines.

In addition two successive decrees (of July 21, 1897 and of March 27, 1971) fixed other penalties that incur the fraudulent candidate and they are in principle heavy: prohibition to undergo any university examination or to register in a higher establishment public for “a maximum of five years”, or even, in some cases, definitively. But effectively repressive measures are rarely used.

More generally, as noted in the July 2007 report, “students are annoyed by the fraud, but refrain from reporting it to authorities who often wish to ignore it. The summons to disciplinary council following cases of fraud are rare, not very dissuasive and the penalties in general light ”.

As has been done in the past to strengthen procedures for verifying the identity of face-to-face candidates, there have recently been attempts to set up remote monitoring to detect the possible presence of others. people assisting the examinee in remote assessments. But in addition to raising ethical and even legal problems, it has proved costly and incomplete for continuous monitoring.

A subject without taboos?

Among many others, there are three historical examples. The essayist and journalist Jules Vallès evokes Le Cri du Peuple on February 13, 1884, a very significant memory of his student life:

“He had failed again, and he offered to replace him […]. A version can win and lay off quite a bit. I was stupid enough, cowardly enough, not to accept the combination, not to seize the opportunity with my hair, not to adopt this profession and rush into this livelihood. “

Among the “smugglers” not “professional” but occasional and high-flying, we can quote for example Louis Leprince Ringuet, future physicist of international renown, agreeing to replace for a partial of Polytechnique his fellow student Jean Borotra in order to allow him to go and play a tennis tournament in Belgium under the pseudonym Ortabor (his anagram)

“Georges Pompidou is violently moved […] comes the test of philosophy. From her bench, twenty yards from him, the Parisian girl gives desperate looks to the brilliant philosopher. On a sheet of pink draft, he throws, in a tight handwriting, notions on one of the subjects, rolls it up into a ball. Everything now depends on a ballistic exercise. The Parisian woman obtains an unexpected note in philosophy. Georges Pompidou, who had written two dissertations, one for his own use, the other for her, was received without mention. “

We see that we should not count automatically, far from it, on the exemplary figures in this case. Three prominent figures, however, Jules Vallès, “the virtuous insurgent”, Louis Leprince Ringuet, the “great rationalist scientist”, Georges Pompidou, “the classical humanist head of state” were no mystery – even become adults and famous – of their differences in the matter during their youth … We should not be surprised that dozens of students currently boast every day on social networks of having cheated during their university tests.

Ultimately, how not to take up the concerns expressed in the report of the General Inspectorate of July 2007?

“Should we be concerned about fraud? The mission responds positively without hesitation: indeed the question of the authenticity of the candidates’ performances, their honesty and the equality of the conditions of composition does not allow discussion; on the other hand, it is certain that as soon as the competition between training courses is more intense, when university degrees are more sought after, fraud will tend to develop, including in new forms, and will undermine a large part of the development efforts made by universities. “

Author Bio: Claude Lelièvre is Teacher-researcher in educational history, honorary professor at Paris-Descartes at the University of Paris