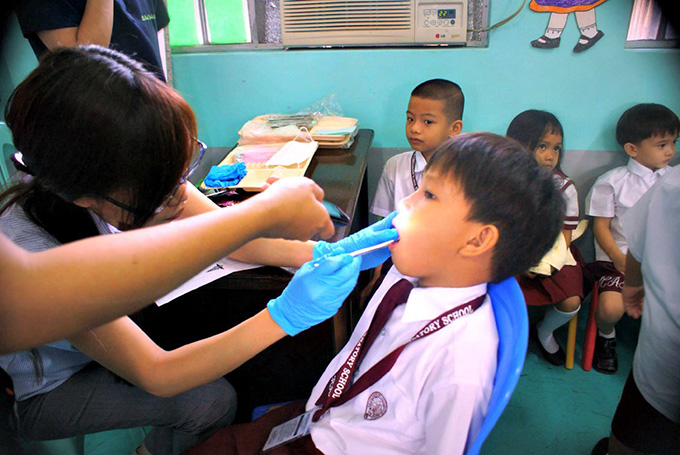 While the word is free around incest, Emmanuel Macron spoke at the end of January on social networks to assure the victims of his support and declared that screening and prevention meetings would be set up at the primary level and in college, as part of compulsory medical examinations.

This announcement, however, refers to a difficulty in the field: the shortage of school doctors, pointed out again by a report from the Court of Auditors in April 2020. A third of the positions of doctors would be vacant in the National Education, so that these professionals provided only 18% of the visits planned for the sixth year of pupils in 2018, up from 26% in 2013.

In this particular period when the words pandemic, class closures, distance education, dropping out, malaise are evoked every day, it is important to reconsider the role of these professionals who are on the front line in the face of current public health and social issues.

They are doctors most often specialized in general medicine, but also in pediatrics, public health or any other specialty. In fact, school medicine is not, in France any more than elsewhere, a specialty recognized as such and therefore taught in medical faculties. Or barely.

Particularly for the past year, as part of the reform of the third cycle of medical studies, voluntary medical interns can do a “transversal specialized training” in school health, which could, in the long term, pave the way for specialization. But the road is long and strewn with obstacles.

While there is school health or medicine in many countries, there are not always doctors whose practice is exclusively reserved for schools. This is the case of national education doctors in France: they are recruited by competitive examination and, after a year during which they are in work-study training at the School of Advanced Studies in Public Health (EHESP) and posted to their sector of activity, they become civil servants, in national education therefore.

To date, a little less than 1,000 full-time equivalents are occupied out of the 1,500 open national education doctor positions. By applying a simple rule of three, on a statutory basis of 1,607 hours per year and per doctor, compared to 12,352,200 students , in France, each student would have a little less than 8 minutes of school physician time per doctor. year of schooling.

Reducing this calculation may appear, it illustrates a certain shortage , as does the range traditionally given to the number of students per doctor (between 9,000 and 30,000). And this all the more so as the missions of the doctors of the national education are numerous. They can be synthesized into three large blocks.

On the one hand, an individual approach to the health of the pupils with compulsory assessments: medical examination during the sixth year, intended to detect disorders which could hinder the entry into the learning process of children in the large kindergarten section. But also a non-conforming aptitude visit to regulated work prohibited to minors, for students under 18 years of age oriented in vocational high school. In addition, at any time in schooling, school doctors can intervene for students with special needs (particularly disabled or chronic illness) or for worrying situations (mainly falling under the child protection register).

On the other hand, the doctors of the national education approach the health of the pupils in a collective way  : health education, monitoring of the school environment, training of the personnel in the characteristics of the health of the child and the adolescent. , collection of data on the health of pupils or even participation in research concerning these audiences.

Finally, they are also involved in the management of health emergencies  : the occurrence of serious events or communicable diseases in the school community. The current crisis is a good illustration of the specific benefit that could be expected from this professional body.

Exercise in schools mainly attracts women ( 96% in 2018 ), who have chosen a career in the service of children and adolescents, in a non-curative approach. The motivations most often put forward are the desire for a team exercise with other professionals in adolescent childhood and education, but also the desire to have a collective approach to health.

The school doctor is in fact not there to see young patients whom he would treat individually at school, following a model of liberal practice. It is a question of considering the school as a living environment favorable to health and as an opportunity to fight against social inequalities in health. Hence the importance of allowing each of these professionals to change paradigms: from the individual to the collective, from curative to preventive, from care to health promotion, as shown by the list of their missions and the program. of their training.

The training delivered to national education physicians therefore aims directly to enable them to best fulfill these missions by integrating in particular priority themes of national education or public health according to current events, taking into account the evolution of the profile of the promotions received in the competition and their needs and by giving them the opportunity to acquire tools in health promotion.

It should be noted that reports and expertise concerning school health have multiplied in recent years, testifying to a double concern: that of the health of young people and their well-being at school to begin with, but also that of the conditions for their development. and their inclusion in national education, in particular by specialized actors.

The range of their missions and their specific skills reinforce the front-line role that these health professionals could play in the fight against the Covid-19 pandemic. And this, beyond their current contribution, dictated by biomedical and infectious diseases ( contact tracing , vaccination, screening tests, emergency management, etc.). We are thinking here in particular of the direct or indirect consequences of this increasingly identified pathology on the physical and mental health of students, especially the most vulnerable (carriers of chronic diseases or disabilities, from families economically weakened by the crisis, dropouts …).

But the body of national education doctors cannot meet these challenges in an isolated and compartmentalized manner, which is however the rule, accentuated by a separate management of each of the health and social professions present within this administration (doctors, psychologists , nurses and social service assistants) and not always smoothly working with the teaching staff. However, it is essential to develop a collaborative and complementary approach between the different actors of student health, in a logic of service and approach by living environment, here the school, which could involve training times shared at develop.

We can clearly see the tension between the scale of the task and the reality of the staff available, between the stacking of missions and the possibility of prioritizing; which could avoid the loss of meaning and make it possible to gain in efficiency, serving the well-being and health of all students today and tomorrow; by optimizing the 8 short minutes of school doctor for each student in our country …