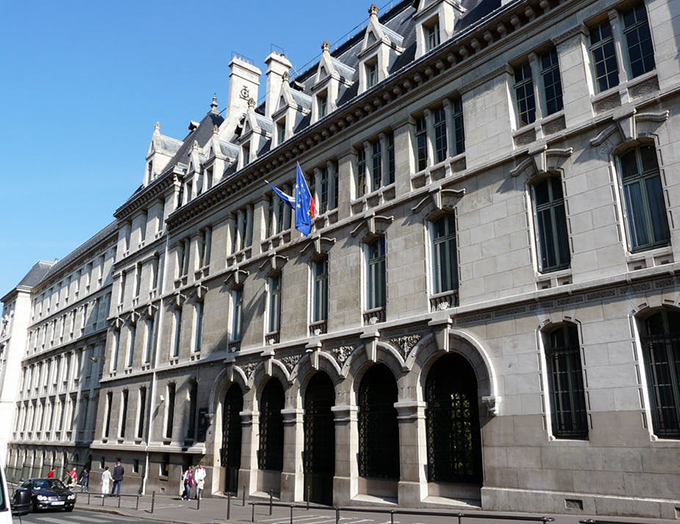 High schools and high punishments are not guarantees against student violence. There are many historical examples of this fact, since the XVII th century to the contemporary period, and I made ample mention in Nonfiction violence at the School , published in 2007 by Fayard. Back on some of these episodes.

A historical period for the example

We will be satisfied here with the moment “ferryste” of the republican and secular institution, preceded by the period that was called “the Moral Order” (when the Third Republic proclaimed was not yet in the hands of the Republicans)

We can follow one of the most famous “revolts” of that time in the “saint of saints” high schools in France, the Lycée Louis-le Grand, from the reports of his headmaster. It begins on the evening of January 17, 1883 with a ruckus that grows after an injustice felt by students. The headmaster calls seven police officers and expels the most unruly; five students are arrested – in the “dungeon” – which has the effect of accentuating the disorder.

Three hundred “insurgent” pupils go to the dormitories: the windows, the night vases, the sinks are broken and thrown away, the mattresses are ripped open with knives. The police officers, reinforced by new troops (they are then sixty) block the “rioters” in a dormitory. Armed with shards of mud and iron bars torn from the beds, students fight against them. The material damage is estimated at 20,000 gold francs, the average annual income of 10 teachers. The sanctions follow quickly: 89 students are permanently excluded from Louis-le-Grand and 13 others from all the high schools of Paris. Measures that will not prevent another revolt, five years later.

A Republican tune lax and deleterious?

Conservatives at the time question the air of the deleterious, even lax, time since the Republicans took power. The newspaper Le Gaulois of March 15, 1883, accuses:

“The schoolboys of Louis-le-Grand are fighting against the city agents. The schoolboy is taught that he has rights, and he makes barricades in his dormitory to drive out his masters; he is forbidden to believe in God, and he no longer respects anyone. “

The royalist newspaper “Le Clairon” of March 14 is even more direct:

“The authors responsible for this revolt are Jules Ferry and Paul Bert, who had a fatal echo in the easily irritable brain of these adolescents in premature emancipation freak. “

On 1 st December 1882, the conservative newspaper The Abbevillois had already taken the pretext of a somewhat unbridled demonstration at a high school girls from Montpellier to attack the new republican power:

“A displaced externat director harangues the exteriors who tear down the barriers, break the windows and vomit obscenities in front of the head of the boarding school. They bellowed the Marseillaise. These infants, raised on the knees of the Republic in the worship of new ideas that summarize the formula “Neither God nor Master”, promise proud brides to the unfortunate idiots who would like to honor them with their confidence. What promises, sapristi, in the incarceration of those Louise Michel in grass for whom insurrection is already the most sacred of duties! “

Revolts against the Moral Order?

In fact, and whatever the conservatives say at the time, most high school revolts took place either under the July Monarchy and the Empire, or especially during the Moral Order period, in the early years 1870, even before the Republicans triumph in the Republic. More than a hundred revolts took place in high schools from 1870 to 1888 (on little more than a hundred high schools in France! ..), which attests to the magnitude of the phenomenon.

Gold from 1870 to 1879 (the year of the end of the Moral Order and the advent of the triumphant Third Republic) there are 80 rebellions high school students of the hundred identified during the period concerned (1870 to 1888). The revolts at the time of the Third Triumphant Republic are therefore in fact very much in the minority: for the most part, they took place before, well before.

A very high rate of punishment

It is undoubtedly advisable to compare this accounting of revolts with another account, that of punishments, which are extremely numerous, massive, omnipresent. The in-depth example offered by Louis Secondy in his Histoire du lycée de Montpellier – a very ordinary high school, and reserved there as elsewhere for “sons of families” – is eloquent.

The revolts are sometimes very violent

Revolts under the Moral Order, which take place in secondary schools yet hardly welcome while “son of family”, can be very violent. In a high school in Marseille, reports the rector of academy to his minister,

“The interns went to the cabinet where the master repeater was sleeping, whom they beat violently. Then, taking advantage of the fact that he was stunned by the beatings, they tied him up, dragged him on the floor and cut his beard halfway. Finally the censor, the general supervisor, and other masters, awakened by the noise, rushed up and succeeded, not without difficulty, after having broken the door, to restore order. It was time: the students had put the rope around the master’s neck and deliberated if they would throw it out the window!

At Bastia, on the night of November 15th to 16th, 1874, the first division tries to strangle its master and assault him with a chair! The rector remains convinced that the students wanted to kill him. In February 1880, he assumed the same project among the students of the same school. “

At Auch, on February 14, 1870, high school students of the First Division rushed on a master in the study room and beat him violently with pieces of wood. “This execution completed, without the efforts of the masters present could have prevented or moderate the violence, the students of the first district have returned to their study and the order was no longer troubled.

But the period of the Moral Order – as we know – did not have the monopoly of these violent revolts. We can cite – among others – the one that upset the college of Amiens in 1835, proportions rather disturbing. She starts in a study room with cries of “Down with the masters! “A student armed with a rifle barrel brings out the teacher. Barricades stand out of benches and tables. The principal makes the door sink. The schoolboys burn paper in the inverted tables and assail the headmaster of dictionaries and pieces of wood. The headmaster beseeches them to extinguish the fire. In vain: he is assaulted again, and finally hurt. He then resorts to armed force – twelve military – and to parents who eventually persuade their children to surrender

Author Bio: Claude Lelièvre is a Teacher-researcher in history of education, honorary professor at Paris-Descartes at the Paris Descartes University – USPC