Even though it’s unclear what exactly the metaverse is and whether it even exists, colleges and universities have jumped onto the metaverse bandwagon. They have augmented in-person and remote video learning with features such as gamified interactive virtual worlds, virtual reality and mixed reality.

In one of the largest efforts thus far, 10 U.S. colleges and universities have teamed up with U.S. technology company Meta and Irish virtual reality platform Engage to create 3D digital versions of their campuses, known as a metaversity. Students will engage in learning wearing immersive virtual reality headsets.

In my recent research, I have examined the metaverse and how it affects organizations and societies. I see six benefits that the metaverse offers to colleges.

Colleges are facing budget constraints and lack access to resources necessary for learning. The metaverse can help them overcome such constraints.

For example, Nashville, Tennessee-based Fisk University hasn’t purchased cadavers due to high costs and maintenance challenges. The university is enhancing its pre-med program with virtual reality cadavers, which are a more affordable alternative.

In the virtual reality lab, a human heart can be pulled out from a cadaver’s chest cavity. It creates the sense that students can feel the weight of the heart in their hands and examine it. They can enlarge it. The class sees and touches the ventricle walls. Students can compare different hearts to understand the results of health decisions that humans made when they were alive. They engage in discussion and agree on the correct diagnosis.

Virtual cadavers don’t degrade and are easy to maintain. Additional features, such as surgical procedures and comparative learning between humans and animals, can be added over time.

Virtual training provides an effective means of visually demonstrating concepts with step-by-step instructions to illustrate tasks. They provide opportunities for learning by doing. Immersion in games can increase engagement in learning activities.

Atlanta’s Morehouse College has piloted a metaversity that involves courses in world history, biology and chemistry. The college found that virtual reality classes increased student satisfaction, engagement and achievement compared to traditional and online formats and increased students’ academic performance. For instance, the virtual reality world history class had a 10% increase in students’ GPAs compared with the same class taught via Zoom and face-to-face the year before.

The internet performs well for sending emails, spreadsheets and PDFs from one device to another to be reviewed or modified independently and asynchronously. It wasn’t built for person-to-person type live and interactive experiences, especially with many participants. Likewise, virtual spaces such as Zoom mostly allow a single conversation. In physical events, participants can move fluidly from one conversation to another.

Some universities are using metaverse technologies to overcome limitations of the internet and video meeting tools. Metaverse-related technologies bridge the gap between real-life and virtual interactions by allowing people to interact more naturally.

Professors and students at the University of Chicago and the University of Pennsylvania use virtual meeting space Gather, which mimics features of real-life interactions. Users create avatars and navigate a virtual map that represents the physical environment, such as a building. The proximity chat feature make users feel that they are running into other students and professors in the hall. Users see and hear video and audio feeds of participants close to them. When they move away, the sounds cannot be heard and the video disappears. Unlike on Zoom, users aren’t forced to be in a single conversation. They can move fluidly between conversations as speakers or listeners. 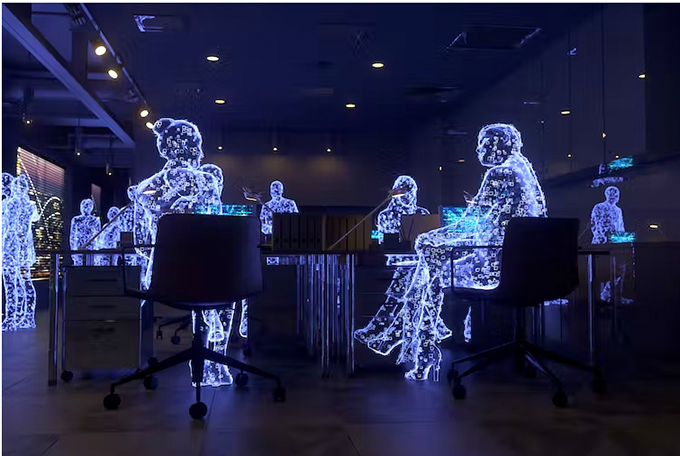 New technology makes it possible to socialize in the metaverse in ways that resemble interactions in the real world. XH4D via Getty Images

The University of Pennsylvania’s computer and information science department used Gather to recreate Levine Hall, which is home to the department. The virtual building’s layout mimics classrooms, laboratories, elevators, stairwells and other features of Levine Hall. The student-run hub of technological innovation, Weiss Tech House, has also been recreated virtually.

The Gather space accommodates 200 students and supports multiple conversations simultaneously. There are six virtual spaces that correspond the building’s six floors. Small groups can branch off into subgroups to work on tasks or engage in conversation.

In some situations, learning in real-world environments, such as those involving chemical experiments and flying airplanes, is risky. In such cases, special equipment, such as virtual reality headsets, software and special gloves for haptic responses, can create immersive simulations of real environments. Learners feel as though the digital world is real.

These technologies can create scenarios that are impossible or impractical to create in the real world.

In chemistry classes, virtual reality allows visualization of how atoms are arranged in a protein. This insight helps pharmaceutical drug research.

Children and young adults are the dominant populations in well-known metaverses, which are in the gaming sector.

About half of Roblox players are under 13 and 66% are under 16. Likewise, two-thirds of Fortnite’s players in 2021 were young adults. Compared with older generations, this demographic is more experience-driven and sees interesting and exciting learning opportunities in the metaverse.

Universities are using the metaverse to attract them. Southwestern Oregon Community College’s leaders think that its metaversity will increase enrollment. This is because higher proportions of younger generations, such as Generation Z, grew up with virtual reality technologies.

Unique experience provided by metaverse technologies, such as virtual reality, is thus appealing to younger generations and can become a key tool to attract them to universities.

Author Bio: Nir Kshetri is Professor of Management at the University of North Carolina – Greensboro