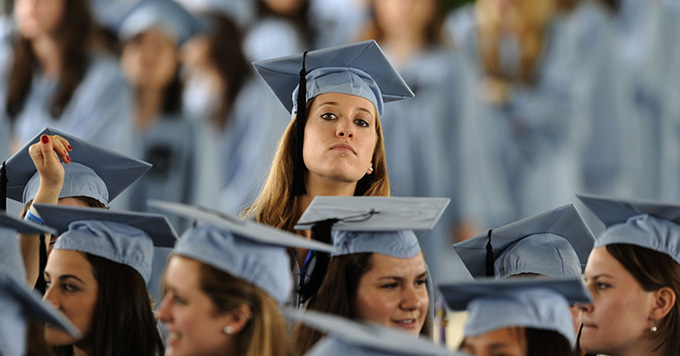 I’m often asked about the long term effects on our culture from the huge student loan scam. I don’t have a crystal ball, so I have only conjecture, but a recent article from Buzzfeed (bear with me, I’ll be making corrections) tries to address this problem:

Jen’s story is like a lot of people’s stories. She’s 35 years old. She and her sister were the first in their family to go to college. She emerged from undergrad with $12,000 in debt, and even though she was making just $30,000 a year at her first job, she made her standard monthly loan payments on time. In 2008, when she was laid off into the depths of the economic crisis, she decided to do what so many other people did then: go back to school…

So far so good for Buzzfeed, the above really is the typical story. Bottom line, students pay way too much for college degrees which financially reward far too little, hurting them greatly. A significant proportion of those students don’t quite learn their lesson and go into grad school, utterly devastating their lives in exchange for an overpriced graduate degree which is no more useful than their overpriced undergraduate degree.

The Buzzfeed piles on with their anecdote by giving Jen a stroke, but that’s entirely unnecessary…simply going to grade school sealed her fate, stroke or not, much as it’s destroyed many of our citizens.

Jen is one of more than 44 million Americans with student loans, and her current balance of $70,000 is just a tiny fraction of our collective $1.7 trillion debt load.

The 44 million number is mostly correct; it’s the official estimate, and I can forgive Buzzfeed for using it. Trouble is, that estimate comes from a strange accounting method, which doesn’t count many students currently in college taking loan money, as having student loans, because the loans don’t “officially” count until the student leaves college. As around 70% of college graduates (and, presumably, college dropouts) have loans, and there are around 20 million college students, we could be looking at 60,000,000 people with student loans now…that’s close to 20% of the population.

The weight of all that student loan debt is markedly different than the feeling of the weight of mortgage or credit card debt — after all, those borrowers can declare bankruptcy, an option unavailable to student loan borrowers.

If 20% of the population had AIDS, cancer, or some other lifelong debilitating and inescapable disease, it’d be major news. But somehow these lifelong loans just aren’t very interesting to the mainstream media. Hmm.

That Jen defaulted on her loans isn’t uncommon, either — default rates are projected to hit 38% by 2023. Like Jen, most who default don’t do so because they’re lazy, or not out looking for work, but because the loan payment amounts are just too much. Nevertheless, much of the conversation around student loan debt still puts the onus on the borrower.

Wow, that’s a huge projection for defaults. Of course, the default won’t save the borrowers, since the loan only gets larger when you default. People with cancer or AIDS are luckier, I guess, since they can at least die—some student loans stay even after death.

Back when we had the sub-prime housing loan crisis, we eventually had a massive default which destroyed several very large and powerful banks, while other banks got multi-trillion dollar bailouts.

Soon, we’re going to have a massive student loan default. Maybe it, too, will be solved by bailouts, but I can’t rule out a violent revolt…20% of the population is large enough for a civil war, and seeing as they’d have little to lose, it’s at least a possibility.

“A member of my family once said I deserved student loan debt because I chose the unrealistic field of history,” one borrower told me.

The above sentiment is quite common, but I feel far more pity than contempt for students trapped like this, and I’m not a sweet person by nature. See, these kids were indoctrinated into going to college, indoctrination which started at around the 2nd grade (if not earlier), and becomes incredibly oppressive by the time they’re leaving high school.

They’re told about the 23 genders, but never told about the perils of student loans. Heck, 28% of students with student loan debt don’t even know it…if they don’t even know they have the debt, perhaps the government is justified in not counting the debt as debt. I don’t agree, of course, since the microsecond the student steps off campus, degree or not, payments accrue.

So, no, this isn’t the student’s fault. It’s our higher education system’s fault, especially since every accredited school (i.e., a school which can take student loan money) certifies in writing that they’ll act with integrity…even as they rip off and deceive students into taking on student loans.

Now, there is a possibility of student loan forgiveness:

The issue came into focus in fall 2018, when the Department of Education released information related to the first round of potential loan forgiveness. Out of 29,000 forgiveness applications that had been processed, more than 98% had been rejected.

Buzzfeed it a bit off here, the rejection rate isn’t 98%, 49 out of 50, it’s more like 279 out of 280…basically nobody qualifies. Eh, Buzzfeed is close enough I guess. The whole forgiveness thing really is a joke:

Now that we’ve established that student loans are crushing a generation of Americans…what’s this going to do to our country?

Next time around I’ll talk about what Buzzfeed has to say.