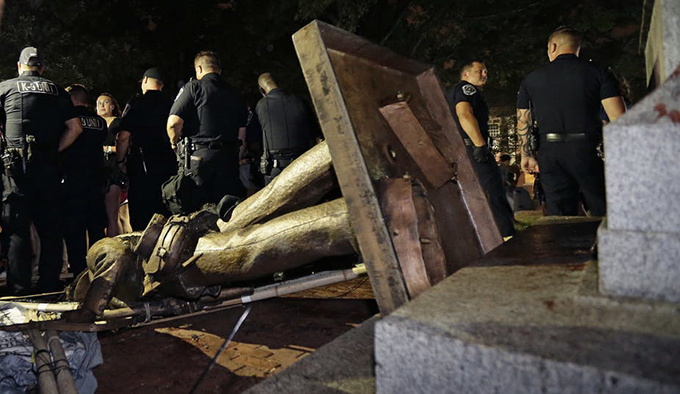 When protesters tore down the “Silent Sam” Confederate statue at the University of North Carolina Chapel Hill on Aug. 20, it wasn’t just destruction of state property – a crime for which the protesters are now being investigated.

Rather, the protesters knocked a powerful symbol of white supremacy from its pedestal – both literally and figuratively. Silent Sam, after all, was meant to pay tribute to those who wanted to maintain slavery.

With the backing of the state, Silent Sam has stood proudly and defiantly at UNC Chapel Hill since 1913. Now the statue has become one of many in dozens of cities and municipalities where monuments of Confederate soldiers and generals have been removed – mostly with official sanction.

But what, if anything, will this latest removal of a Confederate statue accomplish?

While the removal of Silent Sam was a joyous moment for protesters who had long requested that the university acknowledge that the statue was a divisive symbol of white supremacy – for the opposing side, it was an example of what they call the intolerance of the left, particularly among those who oppose the views and policies of President Trump.

Slavery at root of divide

This divide has deep historical roots. Silent Sam and the other 700-plus Confederate statuesstill standing in the U.S. represent a legacy of slavery and the structural racism that followed.

My book, “The Weeping Time: Memory and the Largest Slave Auction in American History,” documented one important aspect of antebellum slavery. The harsh and devastating reality of slave auctions meant that profit mattered more than people. My book is one of many new books that seek to remind a forgetful public of America’s original sin.

Beginning first in Virginia in 1662, with the other colonies and states following suit, officials enacted laws to specify that slave status followed the condition of the mother. This continued right up to the eve of the Civil War in 1861 where the enslaved were still bought and sold on the open market. And so, until the signing of the Emancipation Proclamation by Abraham Lincoln in 1863, to be black in America was synonymous with a separate and unequal status.

The American Civil War was fought to settle the question as to whether blacks should continue to be separate and unequal or whether the United States of America would finally be united – united in its commitment to the notion of justice and equality put forth in the Declaration of the Independence.

The simple fact is that the North won the war, and in winning it, the North preserved the union. The Confederate statues, therefore, represent a step backwards – a symbol of what the United States once was – not what it is now.

Averting a civil war over statues

Today, the nation is experiencing what some call a civil war over statues. The only way to avert this new civil war – in some ways a symbolic one over the outcome of the original Civil War – is to have dialogue. And after dialogue, actions must follow. It could be that protesters who toppled Silent Sam acted out of a sense that dialogue had reached a standstillafter years of debate.

Communities may decide to take the statues down or replace them with monuments that honor abolitionists like Harriet Tubman, Frederick Douglass, William H. Seward or Thaddeus Stephens. They may also choose to keep the Confederate statues intact with a plaque that gives a more balanced view of the causes of the war. In this way, they would be used as a tool to teach about the Civil War – one of the bloodiest chapters in American history and one that none of us should want to repeat.

Tearing down Confederate statues may actually do little to further the goal of ending the legacy of slavery. It will not bring about systemic change or end notions of white supremacy or eradicate structural racism.

The more difficult work when it comes to dismantling the legacy of slavery involves ending some of slavery’s byproducts, such as mass incarceration of black and brown bodies and systemic educational inequities for children of color. The hope is that those protesters will channel their zeal and apply it to these thorny and persistent problems. There is no easy fix.But if and when that fix does come, 100 years from now, America will be remembered not only for its technological advances – such as its computers, its robots or its driverless cars – but for its commitment to human rights.

Author Bio: Anne C. Bailey is a Professor of History, Binghamton University at the State University of New York