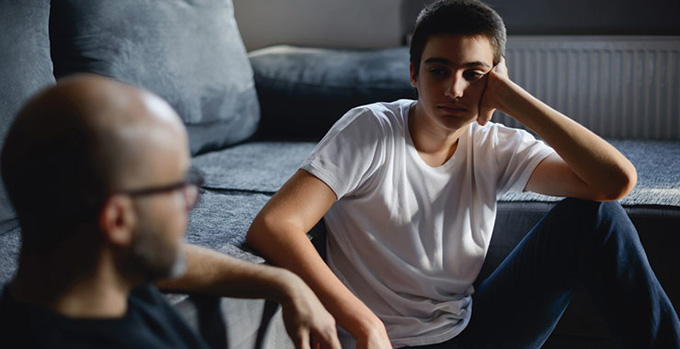 “School or no school, it won’t matter.”

“Young people’s issues are minor compared to those of adults.”

As researchers concerned with suicide prevention in youth, we sometimes hear people express sentiments like these about young people in the pandemic. But socialization is an important part of growing up. As much as COVID-19 has affected adults, it may affect children and teens even more.

How to explain to a young child why he cannot play with other children? How can children learn to read facial expressions when people wear masks? How to see friends, how to date and form new relationships with social distancing and schools mostly online? Such experiences are so vital to teenage and young adult development.

This new angst is now added to the plethora of mental health issues already affecting young people. Though experts suspect there has been an uptick in suicide in the pandemic, 2020 statistics are not in yet.

How common is teenage suicide?

Suicide is the second leading cause of death in adolescents. Each year in Canada, there are more than 200 young lives lost due to suicide.

Many parents wonder what they should know about teen suicide and what they can do to prevent it. With a better understanding of suicide, and with teenagers spending more time at home, we believe that parents can engage in an honest and safe conversation about suicide with their kids.

What parents should know about teen suicide

Every life lost to suicide is one too many. When someone dies by suicide, people closest to the deceased are severely aggrieved, and members of the community, such as students and teachers at school are afflicted as well.

For each suicide, many more teens think about suicide or attempt suicide. Our research shows that before age 21, about 22 per cent of adolescents claim to have thought about it, 10 per cent have had serious thoughts and seven per cent have attempted suicide. While the probability of death remains low, the likelihood of ideation (considering or wanting to end one’s own life) or attempts is common.

There is an important sex and gender gap in deaths by suicide: about two or three boys to one girl. However, girls are more prone to attempt suicide.

Why are suicide rates higher in boys? First, boys often use more violent means, making medical intervention difficult. Second, traditional gender roles (“boys are strong”) may encourage the hiding of innermost thoughts and discourage help-seeking. But the gap is closing. Suicide rates are on the rise in girls and young women in Canada.

Why do adolescents attempt to take their own lives? This haunting question has no clear answers.

Suicide is a complex phenomenon, with biological, psychological and social interactions.

We also know that suicide rates are higher in Indigenous youth and in youth identifying as lesbian, gay, bisexual, transgender, queer or questioning (LGBTQ+).

Many experts point to increased use of social media and to cyberbullying as factors fuelling the mental health crisis. About 15 per cent of adolescents report having been cyberbullied at least once in any given year.

With the COVID-19 crisis and more time spent online, the risks of excessive screen time, loneliness and cyberbullying could have increased, with associated adverse social and mental health effects.

What parents can do to prevent suicide

A recent study in the United States showed that 50 per cent of parents were not aware that their adolescents, especially younger adolescents, were thinking about suicide.

For this reason, it’s important to be there, and be aware. Be especially attentive to warning signs. Don’t wait for teens to come to you. Engage them in conversation.

Be alert for any signs of psychological suffering, non-suicidal self-injury, social isolation, increased drug/alcohol use or researching the internet for potential means. Any step toward exploring suicide or signs of considering a suicide attempt should be considered a red flag.

For instance, a parent might ask: “I am concerned because I’ve noticed that you have been acting differently lately. Some teens undergoing a difficult time can have dark thoughts or even suicidal thoughts: Is it happening with you?”

Asking the question about suicide will show you care. It will not increase suicidal thoughts or put ideas into your child’s head.

The most powerful parental response is to validate your teen’s feelings. To validate does not mean to agree, but to genuinely recognize and accept feelings, thoughts and behaviours.

However, a teen may not feel like sharing or expressing loneliness. When communication is difficult, tell your teen you’re available. Ensure they have someone to confide in.

Validation can be challenging. Parents are encouraged to seek professional help for themselves and to consult self-help books on validation.

Most adolescents who transition from ideation to attempt will do it within the first year. Seek help early.

Among teens who attempted suicide, about half will make another attempt during the course of adolescence.

For some, the risk continues into adulthood. The risk of dying by suicide is highest for those who attempt more than once. Restricted access to means, such as locking down medication, is an important prevention strategy.

It’s important to know that providing adequate social support and professional mental health care can change outlooks on life. While suicide might appear as a solution to a suffering teenager, it never is. Recovery is always possible. Teenagers with suicidal ideation need to be reminded it’s never too late to build a life worth living.

While initial interventions should focus on safety, long-term treatment seeks to build protective factors, such as self-acceptance, supportive relationships and commitment to positive life goals. In this time of recovery stories of advocates who have survived suicide ideation or attempts and moved beyond surviving to thriving can be an important source of hope.

Available resources for parents and teens

Determining suicidal risk is complex, even for the most experienced mental health professional. There is no blood test or brain scan to predict with precision who will make an attempt or who will die by suicide.

We recommend that, according to level of need, parents who are worried call helplines, contact their adolescent’s therapist or take their teen to the hospital emergency department (ER). A visit to the ER may be appropriate when the risk is acute or imminent.

Mental health services are available privately or through public institutions like schools and health clinics. Treatments such as dialectical behavioural therapy, or cognitive behavioural therapy when parents are involved, have been effective in reducing suicide risk in vulnerable teens.

While you are not expected to know exactly what to do or say if your teen has suicidal thoughts, you can certainly be a valuable source of support.