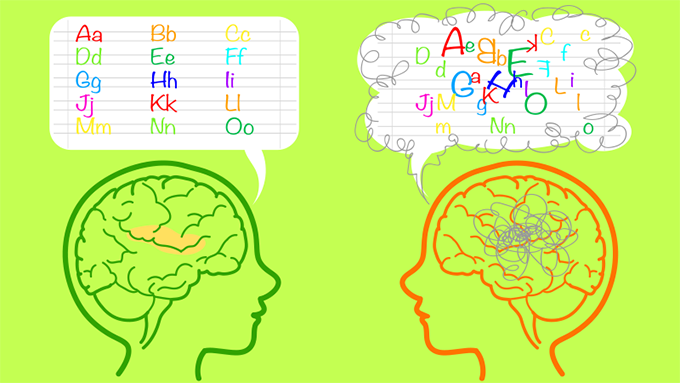 The Dyslexia is a disorder of neurodevelopmental affecting learning reading and mainly reading speed and accuracy. One in fourteen children has this disorder.

Therefore, it is very common in our classrooms. It is also one of the most widely known disorders in society in general. However, there is a set of false myths about its nature, characteristics and intervention. Then we are going to review them and try to shed some light on their certainty:

Having a family history does not determine that the child will have dyslexia, but it does predispose him / her. Therefore, if a child has a history, it should be followed from the beginning of Early Childhood Education in order to detect and intervene as soon as possible.

2. If a child is left-handed, he is more likely to have dyslexia

In the past it was thought that being left-handed caused reading and writing difficulties and for many years these children were forced to write with their right hand. This has generated a set of myths that still exist and that have no scientific basis. Being left-handed does not predispose you to have reading problems.

3. If the child confuses the words in the mirror when reading and writing, he is dyslexic

Reading and writing in the mirror is done by many children in the initial stages of learning to read, but later these errors disappear. There are, yes, some children with dyslexia who carry these mistakes for a longer time, but not all do. Therefore, this is not a marker for having dyslexia, but rather it is a slow reading and with errors that are not expected for his age.

4. Dyslexia does not manifest itself until the age of 7

There is a certain tradition of waiting when a child does not learn to read at the same rate as his classmates, who will later evolve. This is a totally inadvisable practice. The important thing is not the diagnosis, but the detection and intervention as early as possible. We must not wait for it to fail and we must start working from the first warning sign.

5. A bad reading habit can cause dyslexia

Dyslexia is not generated by a lack of reading habit but by a set of variables. The root of the problem is a genetic predisposition that generates a phonological deficit, but this is not enough to explain the heterogeneity of reading difficulties. There are numerous risk factors at the biological, cognitive and environmental levels. Therefore, we must maximize the beneficial effects that the environment can bring, such as doing systematic and intensive work in schools and a daily reading habit at home.

6. It is a disease that with proper treatment is cured

Dyslexia is not a disease, it is a learning disorder that cannot be cured, but rather improves with proper treatment. Many studies have shown that with early and intensive intervention between 56% and 92% of these children achieve average reading level. Although there are different degrees of affectation, the later that intervention is performed, the less will be the degree of improvement.

7. Children with dyslexia are lazy who do not make an effort to learn to read.

This is a myth that must be banished from the classroom. Children with dyslexia are not lazy, but rather have a lot of trouble reading. There is no child who does not want to learn to read well. The important thing is to provide each of you with the best strategies and activities so that you can achieve your maximum potential.

8. Dyslexics have a low IQ

Precisely one criterion to be diagnosed with dyslexia is to have an IQ within the parameters of normality. Therefore, they are children with normal intelligence , but their difficulty lies precisely in a specific problem to automate reading. The great challenge for them is that in school they first learn to read and then they learn by reading and if one of the main learning tools is affected, their school performance will also be affected.

9. There are some miracle methods that cure dyslexia

There are multiple and varied methods that promise great results such as auditory integration (Tomatis), visual therapy (optometry), colored lenses or sensory integration. Scientific studies have shown that they do not produce improvements in reading performance. The only intervention that has been found to be effective is one that focuses on work on phonological skills (phonological awareness and the alphabetic principle) and reading practice .

10. People with dyslexia are more creative and excellent in other areas

Unfortunately this is not the case. Although there are many lists of celebrities with dyslexia , their genius is not a consequence of having this disorder but, being very frequent, it is normal that there are a large number of people, also famous, who have it. However, the essential fact that we must keep is that, although these people had dyslexia, it did not prevent them from succeeding in their respective fields.

We hope that clarifying these myths can help better care for people with reading problems , both for parents and teachers.