While technological innovations are accelerating, the boundaries of professions are constantly being redefined and new functions are appearing. It is therefore difficult when one enters higher education to know exactly what missions a career will be made up of. To help students project themselves into the future, the magazine press regularly explores these new fields, like the monthly Capital which, at the end of 2021, stopped on “10 professions that you will be able to exercise … in 10 years” .

What skills will it take to practice them? What are the postures and know-how that will make the difference in mastering a position? And above all, is our pedagogy in phase to train now for these professions?

To answer these questions – and because they are at the heart of our educational ambitions – we will rely on three of the ten professions mentioned in the article: “nudge designer”, robot educator and crisis anticipator.

Get out of known frameworks

The nudge designer is someone who “imagines solutions to influence the behavior of users or consumers”, the article tells us; it is the one who will, for example, draw steps on a sidewalk towards the trash can to encourage cleanliness.

Of course, he needs fundamental skills, in this case knowledge of behavioral/cognitive psychology in order to determine what makes a person act or not and transversal skills such as empathy, communication. However, to imagine truly innovative devices, the nudge designer will have to have a way of seeing that is completely offbeat, even deviant from classic formatting…

To become a robot educator, it will be preferable to know how to code (“hard skill”), this will also require understanding the man-machine relationship (“soft skill”) but also to be able to imagine scenarios where the robots will be more competent than the human. Finally, it will be a question of thinking about how the robot can learn ethics and empathy. These new ways of teaching robots will surely have to be very inventive, very surprising, even unexpected…

Let us now take the case of an avalanche that a crisis anticipator should manage. Preparing for this type of scenario mobilizes technical skills: cartography, topography, snow science, etc. but also soft skills such as understanding human reactions in this situation (panic, fear, anxiety). However, to anticipate all (im)probable crises, we will have to go further by inventing the simulators of tomorrow, in line with the Hitlab in Chrischurch, which is working on multisensory tools to deal with events such as earthquakes.

It also happens more and more that virtual simulators call on video game specialists because they have this imagination capable of bringing to life extraordinary experiences that sometimes come under the guise of fiction. A fiction which, in certain cases, can become reality and which it will be necessary to anticipate.

If “hard skills” (fundamental knowledge and technical skills, such as mastering a tool, a programming language, mastering gestures) and “soft skills” (often transversal, such as negotiation, creativity, agility, etc.) are already identified to support the professions of tomorrow, it seems that they are not enough.

Often highlighted by Californian start-ups, “mad skills” could be this complement whose need is felt more and more. In this category are skills such as “positive deviance” (the fact of not necessarily taking the path traced while having positive intentions) or even critical thinking, ingenuity, singularity. Often these are the qualities specific to offbeat, atypical profiles, etc. 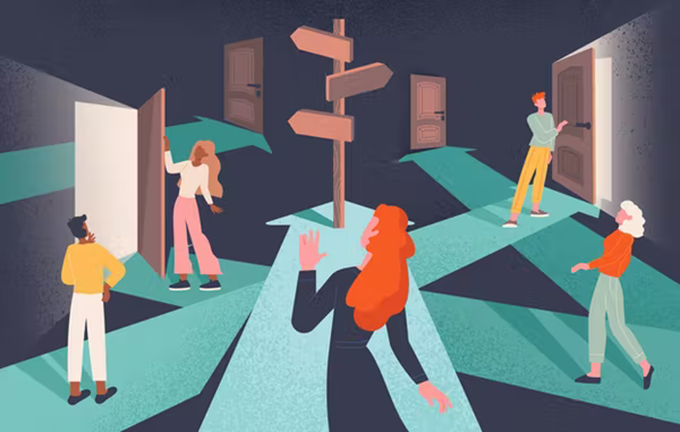 Learning to think outside the box is valuable.

These skills are easily identifiable in an adventurer like Mike Horn or fictional characters like Mac Gyver or Indiana Jones. These heroes have an uncanny ability to “grasp devious ways to achieve [their] ends” . This allows them to orient themselves with the stars, to find food in nature, to build a shelter with recycled materials, to repair a vehicle to get out of a delicate situation. It is a question of “  making oneself, therefore, available to the things of the world , but on the sole condition of cultivating a versatility that opens the gaze; and experiment with arrangements of all kinds that will pave the way towards an exit yet to be imagined”.

It seems to us that it is these postures, attitudes and dare the term, these “mad skills” that will make the difference in becoming a “nudge designer”, a robot educator or even a crisis anticipator. Because they are the ones that appear in this grain of madness that will be specific to these professions. It is these that companies are already looking for and it is these “mad skills” that we must try, as educators, to identify and reinforce.

We believe that even if we cannot all be MacGyver, there is still often, deep down in each of us, this adaptive creativity which allows us to face unforeseen situations .

Our training mission is therefore no longer just to deliver knowledge, but to bring out this ability in everyone to think outside the box. It would therefore be a question of imagining pedagogical devices that make it possible to highlight these “mad skills”, to make learners aware that they have them and help them to reinforce these atypical skills.

The game (serious game) can be one of these revealers of mad skills. “You learn more about someone in an hour of play than in a year of discussion”, said Plato. Through the game, the person shows his true personality and character traits. Moreover, companies are increasingly trying to recruit through games .

More than revealing mad skills and different talents, the game also allows you to train crisis scenario anticipators from now on; this is the case of the French army which created “Red Team” by calling on a dozen science fiction authors to imagine the military and technological threats by 2030-2060. The objective is assumed: to scare oneself in order to better anticipate. What is notable in this example is precisely that the army did not call on geopoliticians for example, but on a fresh look, a touch of madness on the part of the authors and this to train concrete way.

In conclusion, to the term “positive deviant”, we prefer the term “corporate hacker”. It incorporates a grain of madness without forgetting to be corporate so as not to destabilize the organization. Remember that it is also necessary to understand and respect the balances and the heterogeneity which makes the richness of the teams. For Meredith Belbin “nobody is perfect but a team can be”: nobody is perfect, but the team can be – with its touch of madness.

Author Bios: Isabelle Patroix is Doctor of Literature, Playground Manager and Christian Rivet is Associate Professor in Marketing both at Grenoble School of Management (GEM)