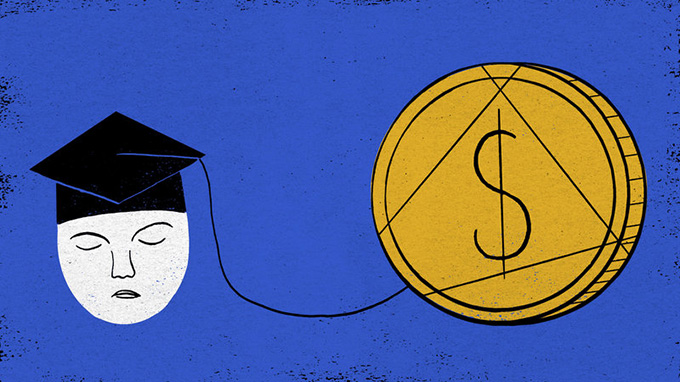 I often request an end to the student loan scam, but I seldom discuss why we have so many of our kids ready and willing to destroy themselves with student loans. Even if we destroyed the supply (student loans), we’d still have immense demand for accredited college degrees.

So as I sit here being pumped through gallons of assorted drugs to stop a cancer a doctor first told me would be “no problem” in 2004, I thought it best to review how we ended up in this mess, particularly since it involves the Supreme Court (the composition of which is a major concern of late).

How the Supreme Court Created the Student Loan Bubble

I should point out this article is a little old; in 2014, perhaps, enrollments were rising, but there’s been a clear trend the last few years where enrollments dropped (especially at converged schools). Ignoring the dated information, there are a few relevant things said here.

The only thing Americans, Right and Left, seem to agree on is that college is an unquestionable good.

The above, of course, is part of the reason for the huge demand. It is, of course, wrong. Experienced welders can make $100,000 a year because of the demand for such skills, and it takes less time to get experience as a welder than it does to get a 4 year degree, the latter of which is deeply unlikely to lead to a job paying anywhere near $100,000…not even factoring in the debt, of course.

Yes, it’s crass to equate a college degree to money, but that’s part of the problem. “Education” and “college” are being treated as synonyms today, even though anyone who wants can get a free education by going to the library (or this “internet” thing people are buzzing about), whereas college generally requires a large and massive debt…and doesn’t promise an education.

Now, I do believe education is an unquestionable good…but where does the Supreme Court come into this?

This 1971 court case planted the seed leading to the destruction of higher education today. I concede I’m not one to follow the Supreme Court closely.

The basics of the case:

The saga began in 1969 when Willie Griggs, a black man born in the segregated South, decided he was overdue for a promotion. In order to get one, per Duke Power Electric Company rules, he had to pass two aptitude tests and possess a high school diploma. Griggs smelled racism. The tests surveyed employees on basic math and intelligence questions. None of Duke’s fourteen black workers passed. Griggs and twelve others sued the company for discrimination. A district court and federal appeals court accepted Duke’s claim that the tests were designed to ensure that the plant operated safely. Duke bolstered its case by pointing out that it offered to pay for employees to obtain high school diplomas and that white applicants who failed to meet the requirements were also denied promotions.

Bottom line: companies used to use internal aptitude tests to determine who could advance. The weapon of RACIST, blunted today after decades of heavy use, was quite sharp 50ish years ago:

Griggs found that if blacks failed to meet a standard at a higher rate than whites the standard itself was racist—a legal doctrine known as disparate impact.

And…game over. Just like that, companies were hard pressed to use aptitude tests, unless those tests gave the same results for blacks as whites. I really feel the need to point out that, in higher education, blacks and whites are not equal, either (and do note any two different groups are “not equal,” as that comes with the territory of being different)…but for some reason our government won’t charge itself with racism by pushing the wildly disparate impact of student loans on blacks. For some reason, indeed.

“What is required by Congress is the removal of artificial, arbitrary, and unnecessary barriers to employment when the barriers operate invidiously to discriminate on the basis of racial or other impermissible classification,” Chief Justice Warren Burger wrote in Griggs. “Diplomas and tests are useful servants, but Congress has mandated the common sense proposition that they are not to become masters of reality.” Burger may have intended to free America of bureaucracy, but his decision in fact bestowed that title—“masters of reality”—on college administrators.

So instead of letting companies determine who should work for them based on tests and demonstrations of ability, they had no choice but to rely on the integrity of college administrators to supply that information.

The solution for businesses post-Griggs was obvious: outsource screening to colleges, which are allowed to weed out poor candidates based on test scores. The bachelor’s degree, previously reserved for academics, doctors, and lawyers, became the de facto credential required for any white-collar job.

With now the only way to advance in life restricted to “first, get a college degree” the demand for higher education sky-sky-skyrocketed. Our kids coming out of high school had it drilled into their heads that college was the only choice for a decent human being…while, quietly the pay for trade skills headed up, due to basic supply and demand.

Diplomas do little to alter the dynamics of innate ability and intelligence—even less so now that institutions have lowered standards. The knowledge gap between college seniors and freshmen is negligible (see: Academically Adrift: Limited Learning on College Campuses). Other studies have found that class ranks at graduation closely mirror testing ranks upon matriculation. If businesses could recruit and screen candidates using testing metrics, it would allow workers to begin their careers earlier, advance quicker, and do it debt-free.

This is such a great article, filled with important information. Not only does it provide a workaround for the huge problem facing higher education, it even clears up a myth I’ve been told, many times:

The lie that props up our Big Education regime is that the GI Bill, which paid for World War II veterans to attend college, produced the upward mobility and economic boom of the postwar period. It’s a heartwarming story, the veteran who would have been a dust farmer but for the grace of government generosity. But it just isn’t true. Only one out of every eight returning veterans attended college. The rest, the vast majority, benefited from something even more egalitarian: aptitude testing. The format favors raw talent above all else, allowing companies to hire high-potential candidates from any background and groom them to fit the company’s needs.

Now, see, 1 out of 8, the top 12.5%, is probably about the right percentage of people who should be going to college. No, I’m not being elitist, and considering the marginal pay of most college degrees I’m certainly not trying to shut people out of college, but our current system where most high school graduates go to college, and most leave years later deep in debt, with no useful skills, and often without even a degree, is obviously wrong.

Now, the demand to go to college was great, but how to pay for it? Here come the student loans…

Colleges, aware of their newfound utility and the easy money pouring in from student loans and Pell grants, jacked up prices. Education costs, as George F. Will has noted, grew 440 percent in the post-Griggs era. That trend continues today. The Project on Student Debt found that total college loans increased 6 percent annually between 2008 and 2012. The average student today takes out nearly $30,000 in debt to buy a ticket to the good life.

Again, this is dated…but imagine starting life deep in debt with nothing to show for it. This is the fate of most of our kids in college today, and it all started with the cry of RACIST, which the Supreme Court heard and responded to (improperly) in 1971.

Maybe we as a country should start paying attention to the Supreme Court after all, since their decisions can damn generations of young people.