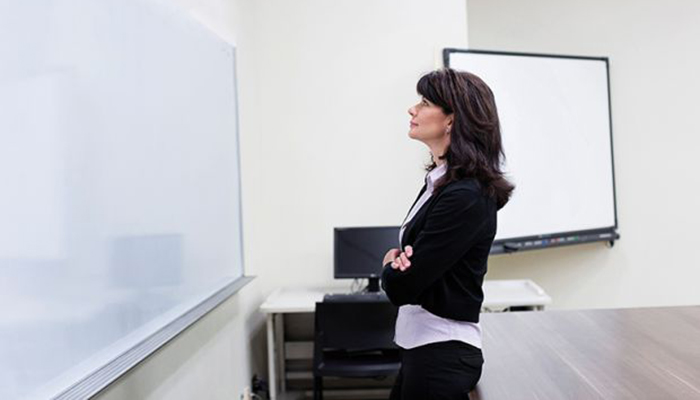 Imagine the following situation: Inés, an English teacher, enters the classroom on her first day of class. After a glance at her group of students, she notices the two boys sitting in the back row.

Turning around to write on the blackboard creates a certain ruckus. Inés turns, with the purpose of restoring order, and to whom she first directs her gaze is those two boys in the last row; however, they were among those who watched with interest what she wrote.

When Inés reflects on what happened, she could ask herself: why, when I turned around, did I look at those students in the first place? If she does, she would indicate that she is aware to some extent of his behavior.

Once here, the challenge is to provide Inés with the necessary tools to understand this behavior and thus be able to deal with it. These tools will start from the analysis of the situation, will go through the contrast between the manifested behavior and other ways of acting, and will end by recognizing what beliefs and values ​​underlie her behavior.

If, on the other hand, our imaginary teacher is not able to recognize that in the face of the commotion she has focused her attention on the boys at the last table, the situation is more complex. It may be because she is not aware of her own behavior. Or because she, even though she is, she does not want to admit it, either because she “doesn’t give in” or because she lacks the tools to deal with it.

Although there are a series of traits that define our character and that have to do with our repertoire of behaviors, there are also automatic or reactive responses.

When we make an initial assessment of a person or a situation, we use models and stereotypes more than arguments. In addition, we expect a series of responses or behaviors that we associate with that assessment. We are even capable of modulating our behavior to obtain a response that confirms that belief .

This need for confirmation is actually due to a need for security, even more essential the more automatic our behavior is. The more automatism, the less awareness, and the more difficult it is to “give our arm to twist” .

A sum of experiences

These behaviors are automatic because they are built from the sum of the experiences lived, observed and heard by both Inés and her students and their mothers and fathers. They are built through interaction with people in the environment , and especially with those we consider “prestigious”.

This sum of experiences learned through modeling, without the intermediary of the word, creates the structure from which our most automatic behaviors are built.

And it is also the reference of expectations, those that inform us about what can be expected from this or that behavior.

To be more aware of our behaviors and their motivations and effects, the use of language is essential.

The language will allow Inés to understand the reason for her behavior and that of the students, observe stereotypes, contrast them with reflections and identify the beliefs and values ​​on which her behavior has been built.

As knowledgeable and primarily responsible for the design and management of relationships in the classroom, she is the first to carry out this work. But she also needs the students in her class and, of course, the fathers and mothers.

To begin with, Inés must express, with arguments adapted to the age of her students, aspects related to both the dynamics of the class and the learning itself. She must explain to them what is important to her in that relationship, what her respect is, what behaviors reflect it and which do not, the importance of the debate, what must be taken into account to debate, etc.

As for learning, you will have to point out which concepts are essential to know or which is the way to go when something is not understood.

Faced with these proposals justified by the teacher, the students will be able to counter-argue; fathers and mothers will be informed and listened to, although the ultimate responsibility for those decisions rests with her.

The importance of making all these rules and expectations explicit lies in the fact that, every time reasons are expressed, space is given to the other and their opinions: the other feels heard and considered. This facilitates the use of reasons and not arbitrary judgments based on stereotypes, in the event of any breach of the agreements on which that relationship is based.

In the case of Inés, the English teacher at the beginning, she could admit that she has looked first at the students in the back row; realizing that it’s one of her automatic behaviors, because too often she’s heard that the students who fall behind on the first day of class are usually the most disruptive; but contrast it with her experience as her teacher, which she has shown on many occasions that this is not the case.

Therefore, your students would have the right and the duty to respectfully criticize this automatic behavior and contrast it with what they think would be correct.

Author Bios: Ana Arribillaga is Professor of the Department of Evolutionary Psychology and Education at the University of the Basque Country / Euskal Herriko Unibertsitatea